Published 3 years ago ∼ Updated 2 years ago

Last night, we tracked the Iranian VLCC supertanker GRACE 1 into Gibraltar’s waters. This vessel departed Iran on April 17th, 2019 and we have strong reasons to believe she is carrying fuel oil as opposed to crude oil. This morning, authorities in Gibraltar issued a written and video statement about their detention of this vessel after Royal Marines boarded her. It is still unclear if they boarded the vessel in EU waters or international waters. We’re still waiting for a confirmation on that.

GRACE 1 has a history of handling STS (Ship-to-Ship) fuel oil transfers. The vessel was constructed in 1997, and is therefore not allowed to dock at many ports because she is older than 20 years of age. That means that her oil transfers need to be done out at sea, and that’s exactly what we saw her do in Iraq during 2018 and in the UAE during 2019. She would typically receive fuel oil from other VLCC’s (2 million barrels) in Iran and then deliver to smaller vessels (Suezmax: 1 million barrels, Aframax: 750K barrels, etc).

Given that the vessel is heavily laden in the water (22.5 meters depth), it means that she’s carrying two million barrels of fuel oil as opposed to crude oil, which is lighter. Fuel oil is very thick (high viscosity) and is used in the maritime sector as fuel for vessels; outputting a lot of carbon and sulfur pollution. 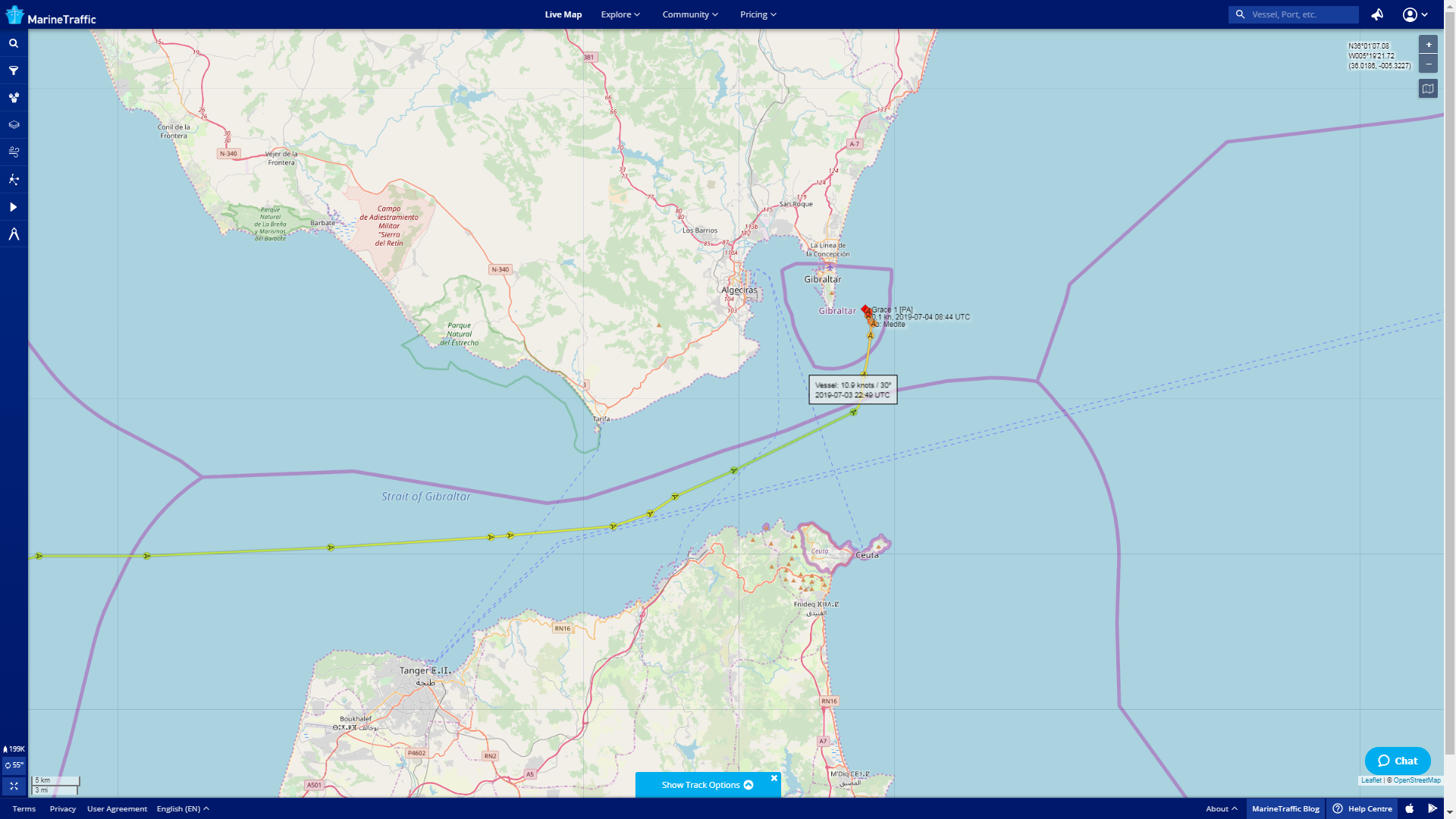 After having spent 10 days in Iran with her AIS transponder switched off, the AIS transponder was switched back on during April 17th, 2019 heading southeast with a trail making it look like she came from Kharg Island. The vessel sailed all the way around Africa due to the fact that a fully laden VLCC can’t traverse the Suez Canal due to the water depth. Most typically, VLCC’s will either sail through partially laden (say 16 meters depth) or offload a million barrels via the Suez-Mediterranean (SUMED) pipeline. Beyond Egypt, one of the owners of that pipeline is Saudi Arabia, so Iran would most likely not receive an approval to use that pipeline. The vessel sailed at a fairly slow speed as it was in no rush. The trip took 2.5 months, which is at least a month longer than usual. 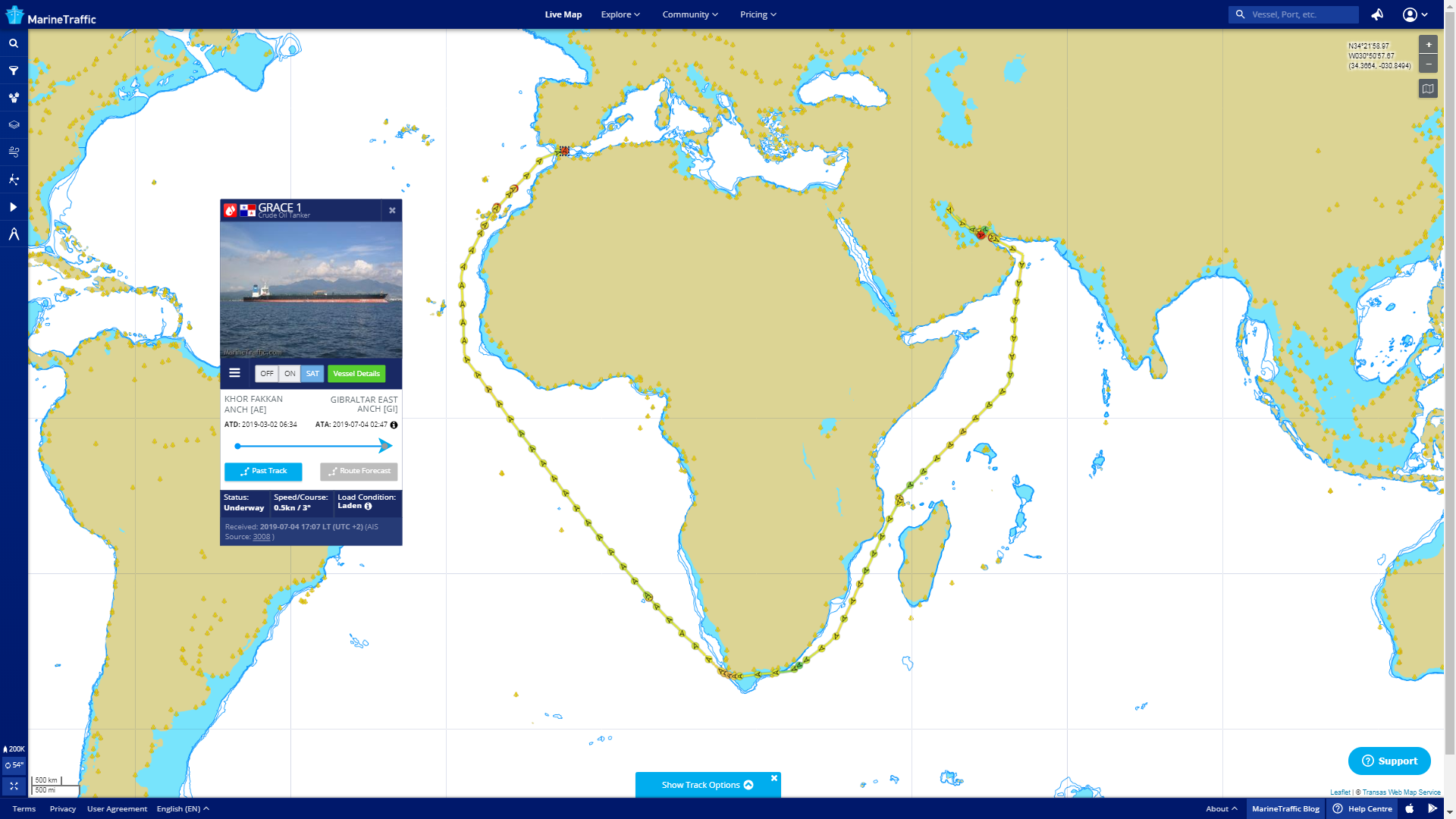 Based on the fact that we never saw this vessel load crude oil at any of the terminals the deliver light, medium and heavy crude oil in Iran, we strongly believe that GRACE 1 first received several loads of fuel oil from the Abadan refinery, which is all the way up north in the river delta region east of Iraq. The only issue is that weather was cloudy for most of the 10 days she was offline. SAR imagery didn’t show much either. The destination she was broadcasting in her AIS message was “MEDITE”, implying the Mediterranean Sea, or in Iran’s case: Syria. Now, the issue with that is that the waters outside the refinery in Baniyas are too shallow for her laden condition. The SBM’s (Single Buoy Mooring) which float in the anchorage are connected by submarine pipeline leading back to the refinery. Those SBM’s are sitting in water that has a maximum depth of less than 20 meters, so it would not be possible for her to supply fuel that way without a very long hose.

We believe that she was due to carry out STS operations within the maritime borders of Syria to vessels in the East Mediterranean. Last week we saw such a transfer happen involving an Iranian product tanker and a foreign vessel. More details about that in a coming Premium report.

Please note that we may be updating this free/public article as further details evolve.

The Government of Gibraltar has stated that the extensive lab tests show that the GRACE 1 is fully laden with crude oil as opposed to the fuel oil we believed. Given that we had no visual at the time to confirm the cargo, that opens up further questions as to why they would ship two million barrels of crude given that there’s a regular stream of crude already going through the Suez Canal aboard Suezmax (1 million barrels) vessels to Syria. We’re more than happy to be proven wrong, but it also means that April 2019’s crude oil production and (combined crude oil & gas condensate) exports were higher, at 3.15 million barrels per day and 1.08 Mbpd respectively.

The Government of Gibraltar returned with further details on their lab results. They said the vessel is fully laden with 2.1 million barrels of light crude oil. This amount is roughly equivalent to 2 million barrels of fuel based on the vessel’s reported depth of 22.5 meters when she departed Iran in mid-April 2019. The Royal Gibraltar Police had arrested the Captain and the First Mate of the GRACE 1 on suspicion of transporting this oil to Baniyas, Syria.

This entry is public and can be shared with the world. People do not need to have a paid subscription to read it.
FAQ Legal & Privacy
Need help?
© 2018-2023 TankerTrackers.com, Inc.