Iranian Fleet Plus One

It happened by pure chance. We were just working on our coming report for Iran’s exports, when we happened to stumble upon a VLCC (2 million barrel capable) supertanker by the name of GRACE 1. According to MarineTraffic, she’s been floating about in the Umm Qasr anchorage in Iraq for at least the past 3 months. We don’t have any record of her actually exporting anything out of the region for as far back as our records go (Q2 2017).

The thing that actually caught our attention is that she just departed during the afternoon of November 30th, 2018 for Iran. The destination says Bushehr, which is the region where Kharg Island is located. She’s coming home. Sort of. 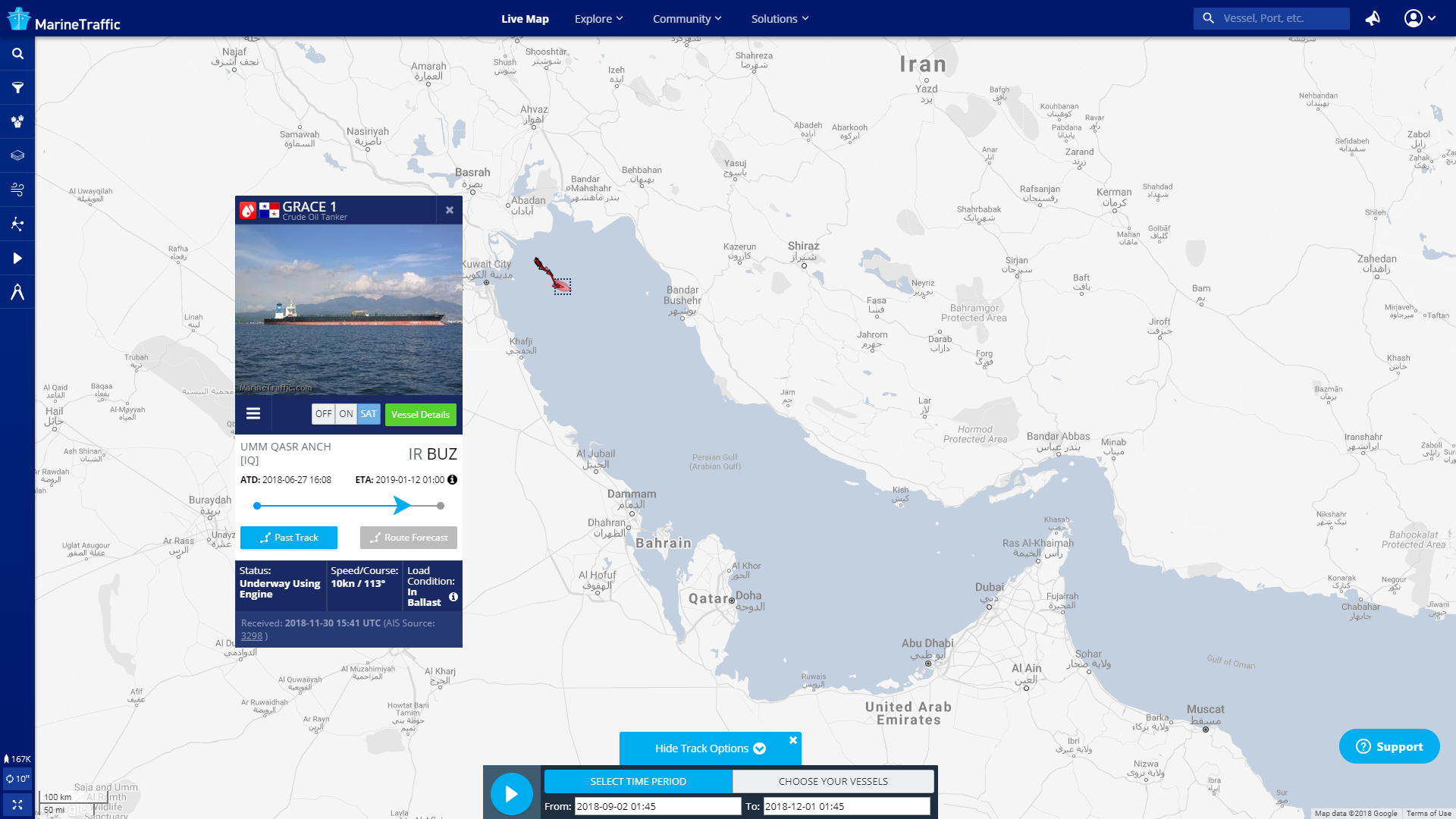 Some ownership information about the vessel from MarineTraffic’s website shows that she is actually owned by RUSSIAN TITAN SHIPPING LINES in Dubai, UAE; but is managed by ISHIPS MANAGEMENT in Tehran, Iran.

When we checked out the insurance company covering her P&I, it says SWEDISH CLUB. On it, the stated owner is GRACE TANKERS LTD, which seems to be the same outfit as RUSSIAN TITAN.

Here’s a clear shot (captured by Planet Labs) of GRACE 1 taken on November 13th, 2018 at the Umm Qasr anchorage in Iraq. By the width of her shadow, we can tell that she’s empty of oil as she’s floating higher above the water surface. 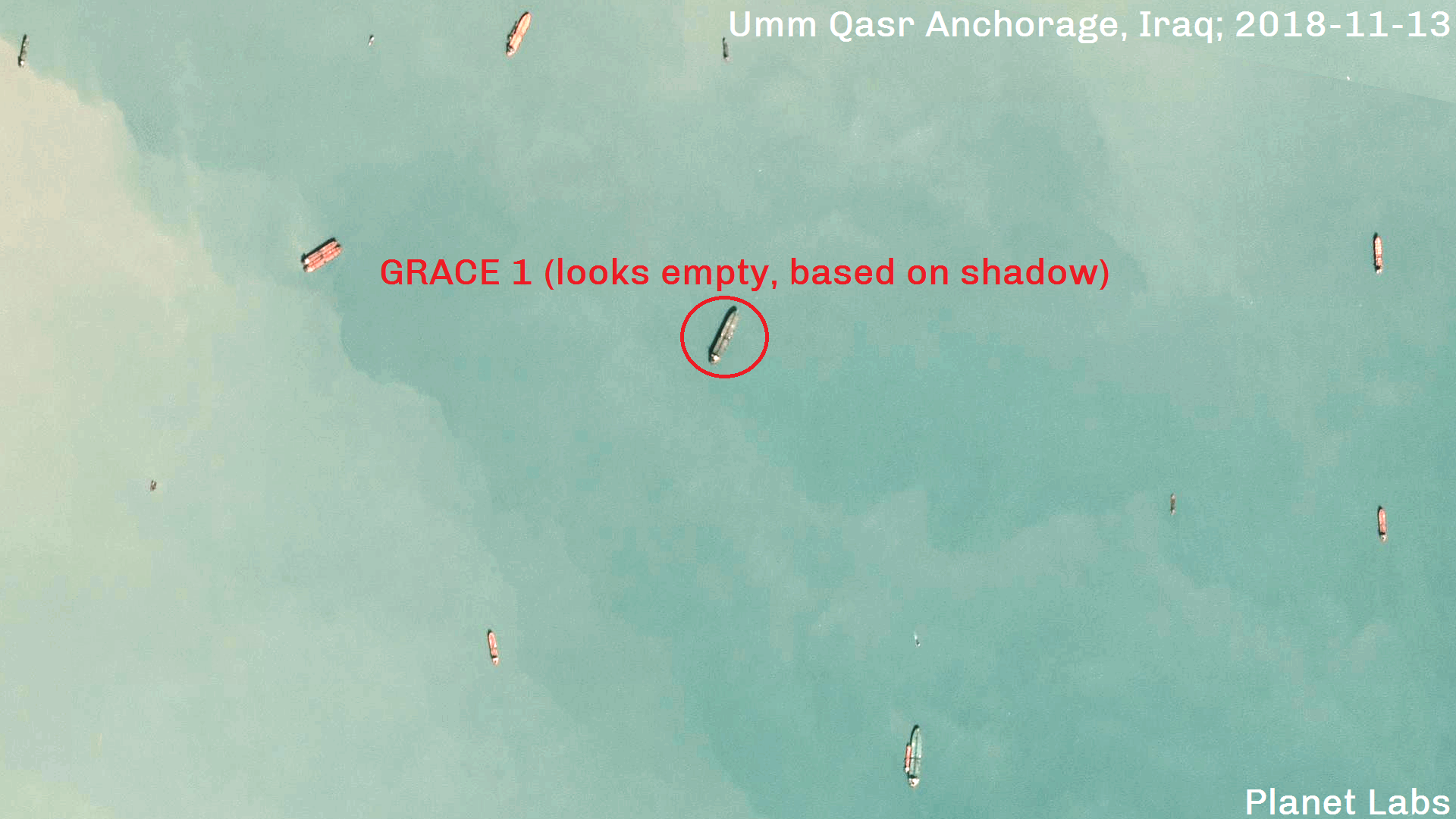 What new role she will play in Iran is anyone’s guess right now as tankers are either exporting, acting as floating storage or serving other tankers via STS (Ship-to-Ship) transfer. GRACE 1 isn’t a spring chicken though as she is 21 years old now, making her inadmissable to most major ports worldwide, which don’t allow vessels older than 20 years of age, so they tend to deliver oil via STS or via an SBM (Single Buoy Mooring) at best.

Judging from her previous work, she seems to have been acting as a STS floating storage for refined products, as one can see two small product tankers tethering with her for transfers.

In light of an article published today by Reuters, the story revolves around the origin of the content aboard the GRACE 1. Reuters was provided documentation which may have been forged, as it showed that the loading of fuel oil occured in Basrah Iraq between December 10th and December 12th, 2018. We know for a fact that this wasn’t the case. GRACE 1 was receiving such liquid cargo via an STS (Ship-to-Ship) transfer from an Iranian VLCC we visually identified as HAPPINESS. It began on December 10th and then ended on the morning of December 12th. Both vessels’ AIS transponders were switched off during this period, and according to AIS, GRACE 1 wasn’t even in Iran. Her latest transmission at that point was on November 30th, when she left Iraq. 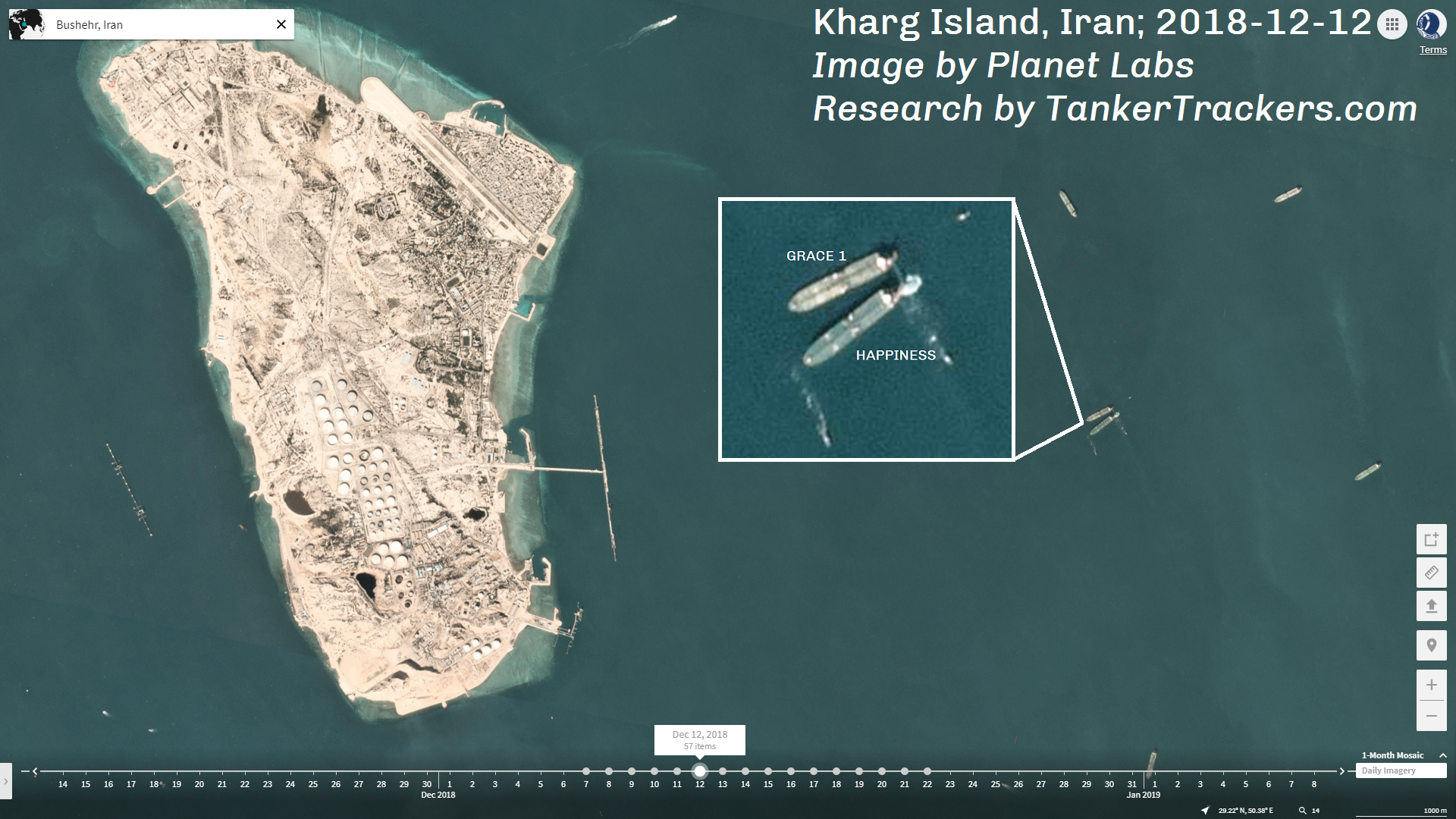 After Kharg, the GRACE 1 re-appeared on AIS on January 14th and continued onwards to Asalueyh while broadcasting that she was fully laden with cargo as her draft depth was 21.5 meters below the sea surface. She spent a month at anchorage for (according to Reuters article) “repairs of damaged diesel generators”. From there, the GRACE 1 continued to the Khor Fakkan STS anchorage on the east coast of UAE; at which point the fuel oil was transferred to two smaller vessels. One of them was the KRITI ISLAND, which then proceeded to transport fuel oil to the UNIVERSAL oil storage terminal in Singapore on February 5th, 2019. 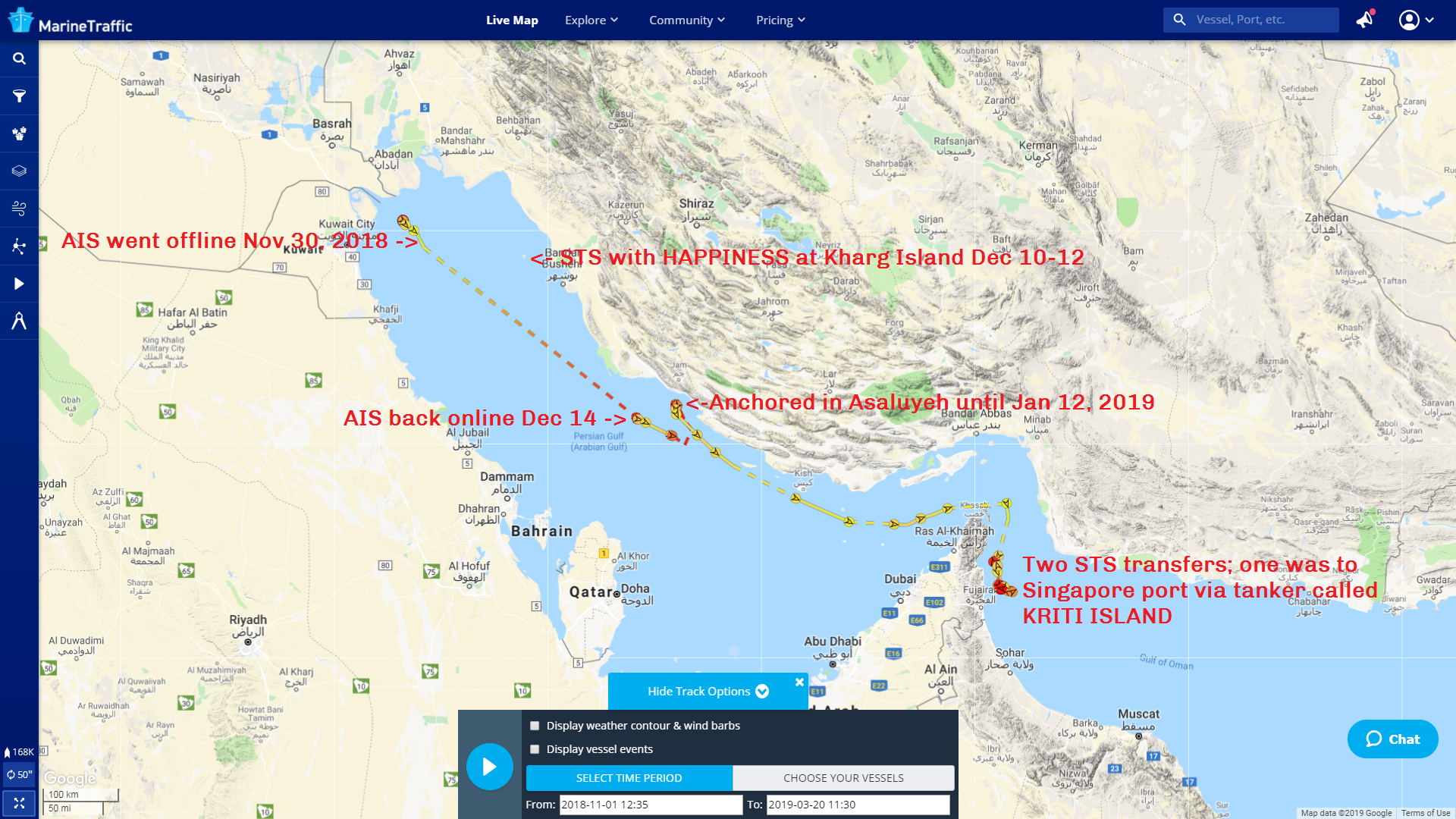 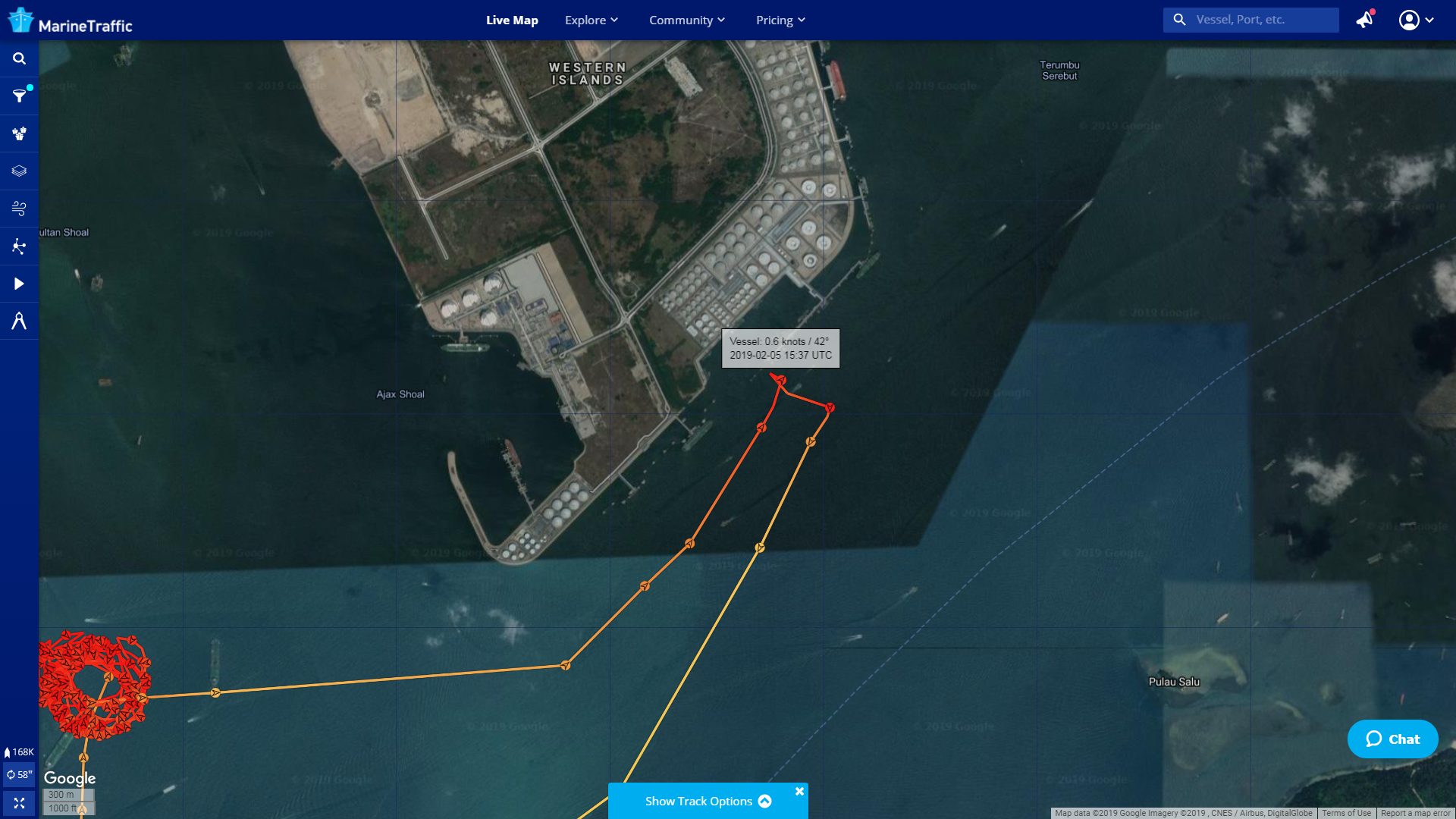