CALLIOP: The VLCC we identified in Venezuela loading oil on behalf of Iran (Updated 2020-12-25)

UPDATE 2020-12-15: Due to legal notice, we have replaced the name of the new owner of the CALLIOP, which originally came from an article on Splash247.com. That article has now been removed.

UPDATE 2020-12-18: We found the data showing where CALLIOP spoofs as NEW ANDROS while heading towards Venezuela.

As written in the Reuters article today (2020-12-14), we have identified the VLCC supertanker at the José Terminal in Venezuela which is currently loading aboard 1.9 million barrels purportedly on behalf of the National Iranian Oil Company (NIOC) according to PDVSA’s bill of lading. Her name is CALLIOP. We received this photo of the vessel, and although her name was painted over, it helped narrow down the possible candidates. 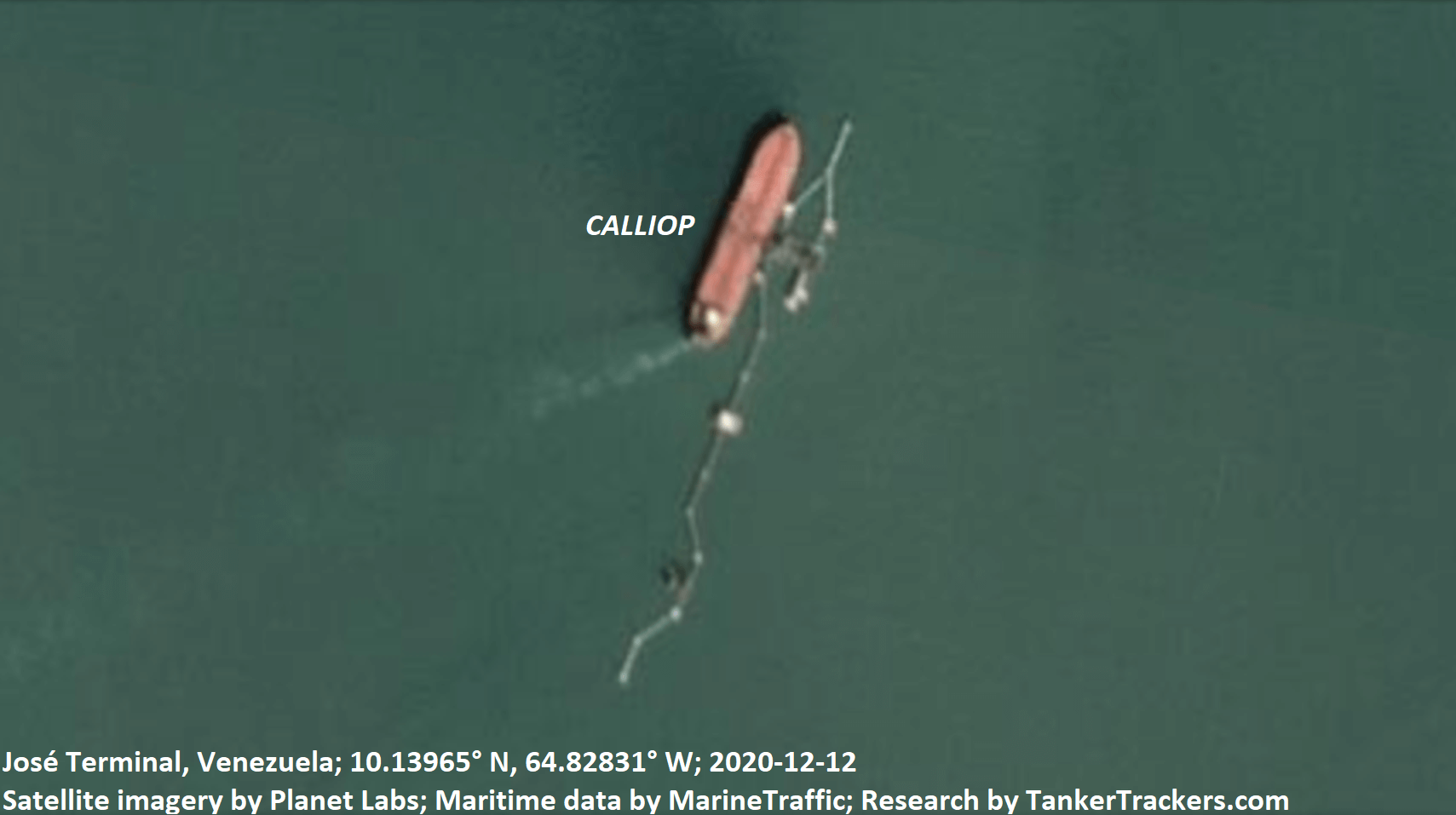 The identification process began immediately upon the anticipated arrival of the vessel, as there was word of a vessel called “NDROS” in PDVSA’s bill of lading, however it is merely a nickname for scrapped VLCC called NEW ANDROS. The real NEW ANDROS was beached at the Gadani scrapyard in Pakistan two years ago on 2018-07-20 and spent the next several months being chopped up into smaller pieces so that the steel could be re-sold. 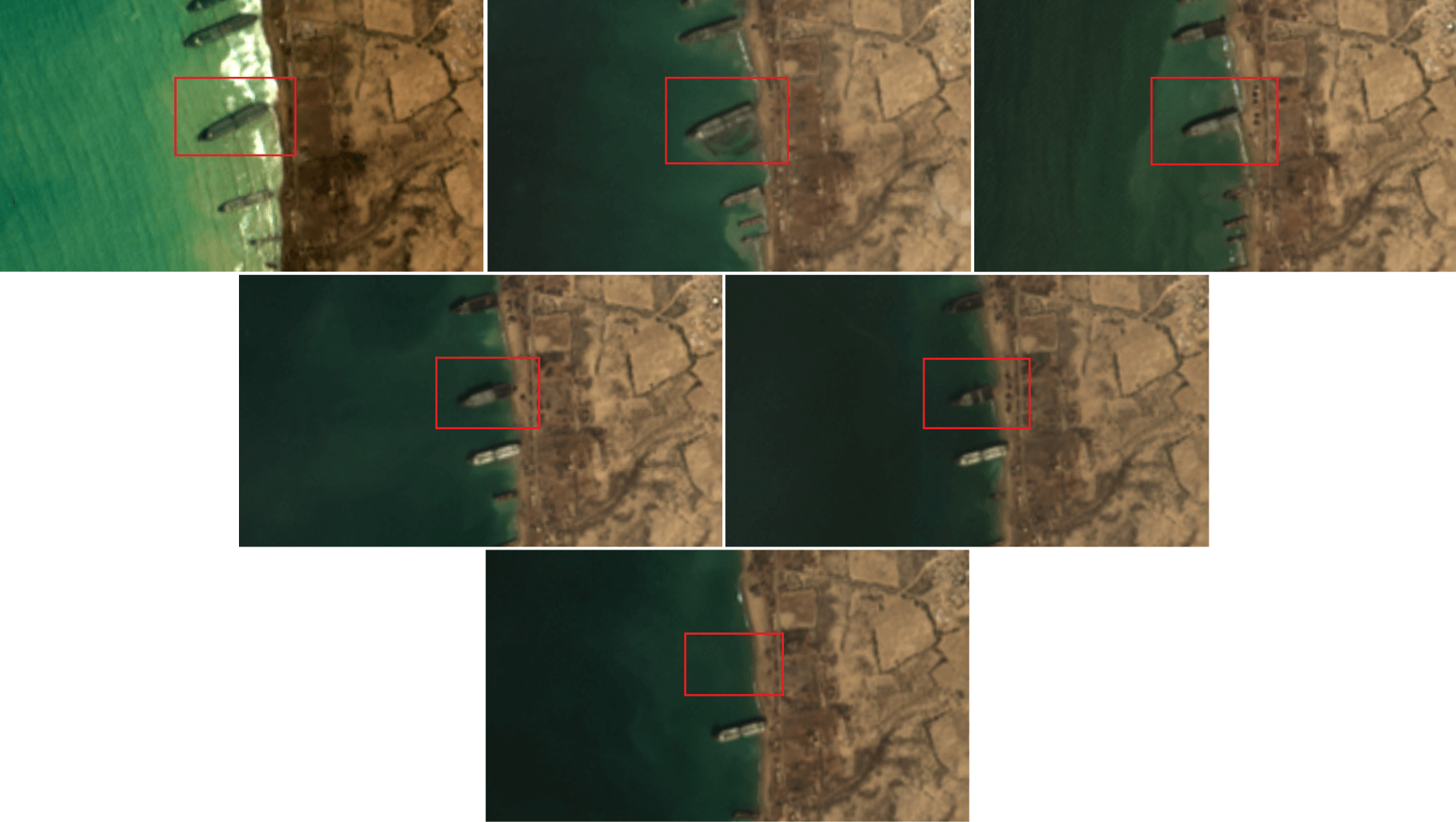 Satellite imagery by ESA Copernicus Sentinel between July-December 2018, captured at Gadani, Pakistan. It shows how the NEW ANDROS was being scrapped.

Although MarineTraffic shows CALLIOP continuing north towards Nigeria, she’s not actually there. The vessel’s fake position is being spoofed via AIS networks. We checked both satellite imagery as well as SAR (Synthetic-Aperture Data) data over the past two weeks, and there just isn’t any tanker there.

What actually happened, was that CALLIOP set sail for Venezuela, but once she showed up off the coast of South Africa on 2020-11-20, she assumed the identity of NDROS (NEW ANDROS). We can see that in the AIS data below. It also says that the vessel was bound for Trinidad & Tobago, which is next door to Venezuela. She assumes the identity of MMSI 511800000, which is the number that belonged to the late NEW ANDROS. This information is interpreted in MarineTraffic’s data as a proximity event between two vessels at 17:23 UTC on 2020-11-20. Currently, the vessel that owns MMSI 511800000 is a 12 meter long Palau-flagged passenger vessel called JELFAR 1. 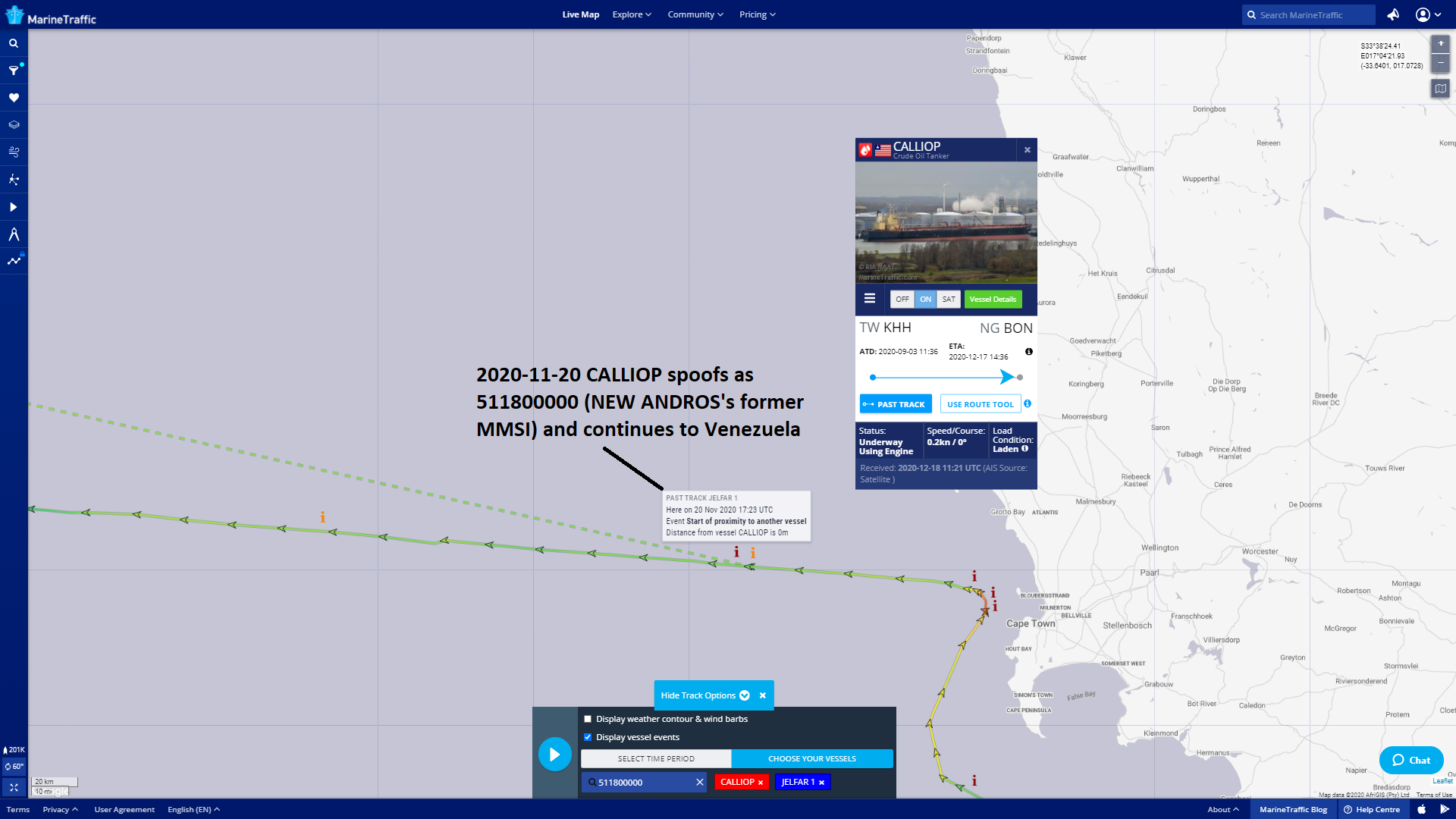 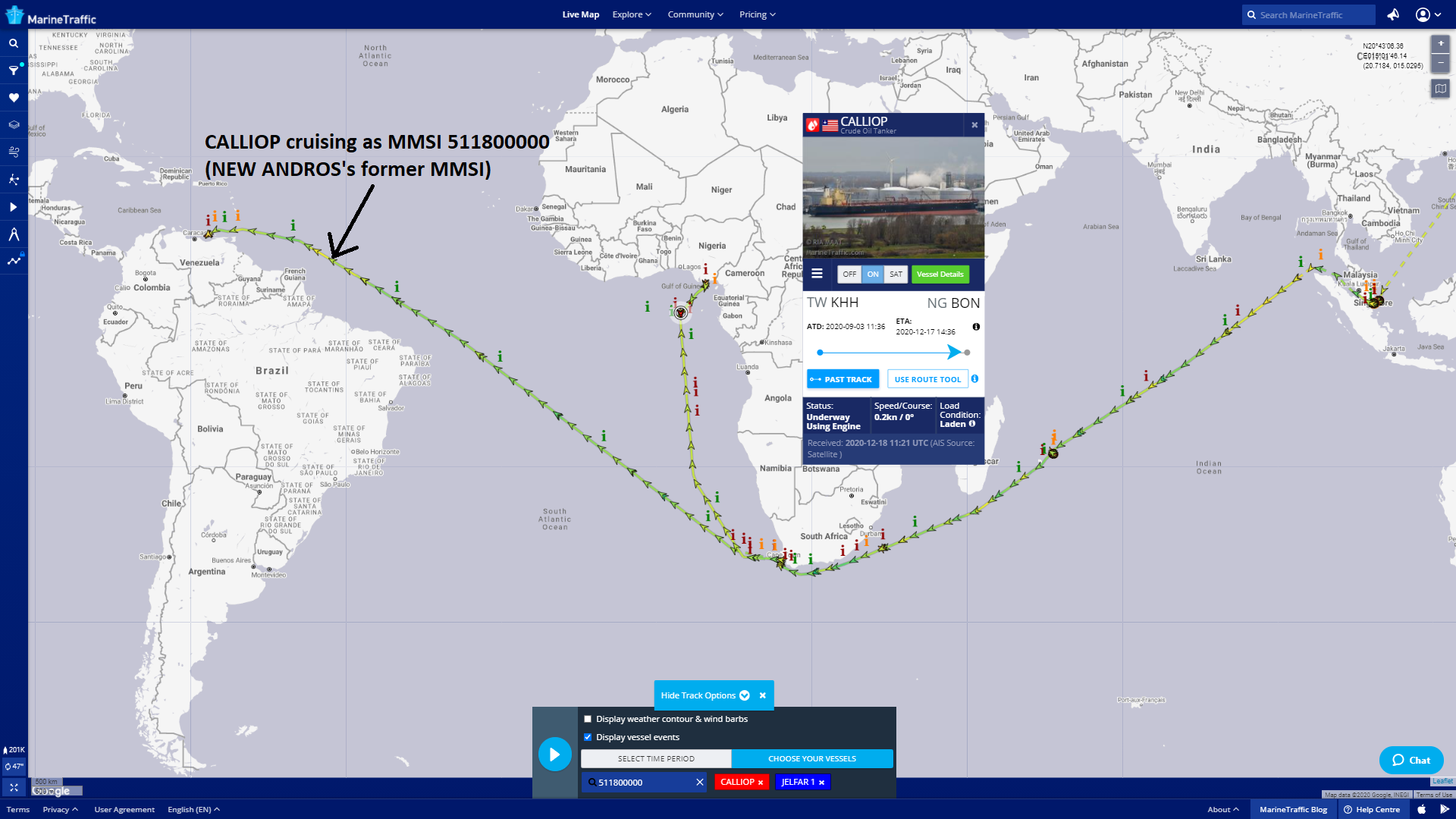 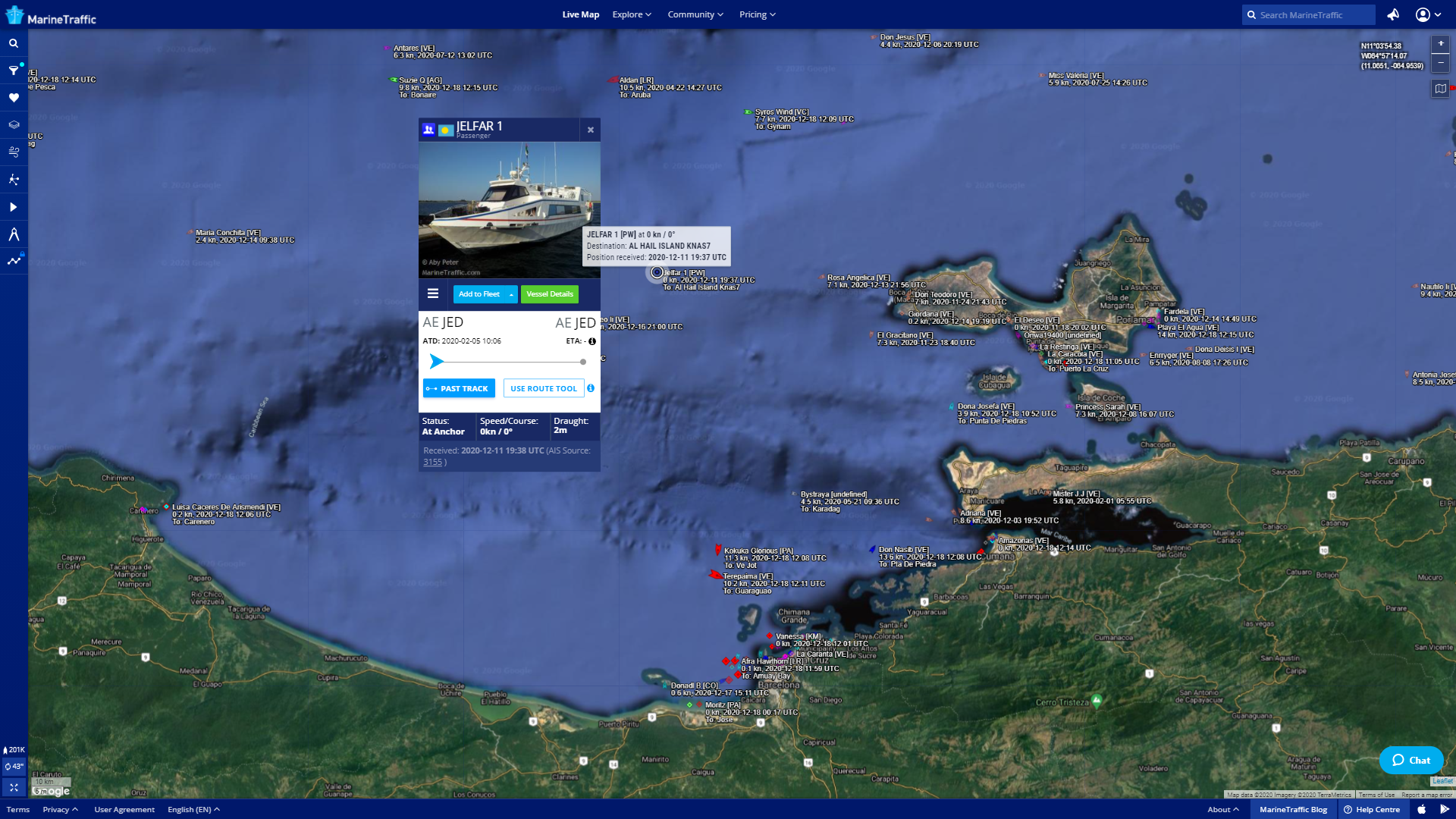 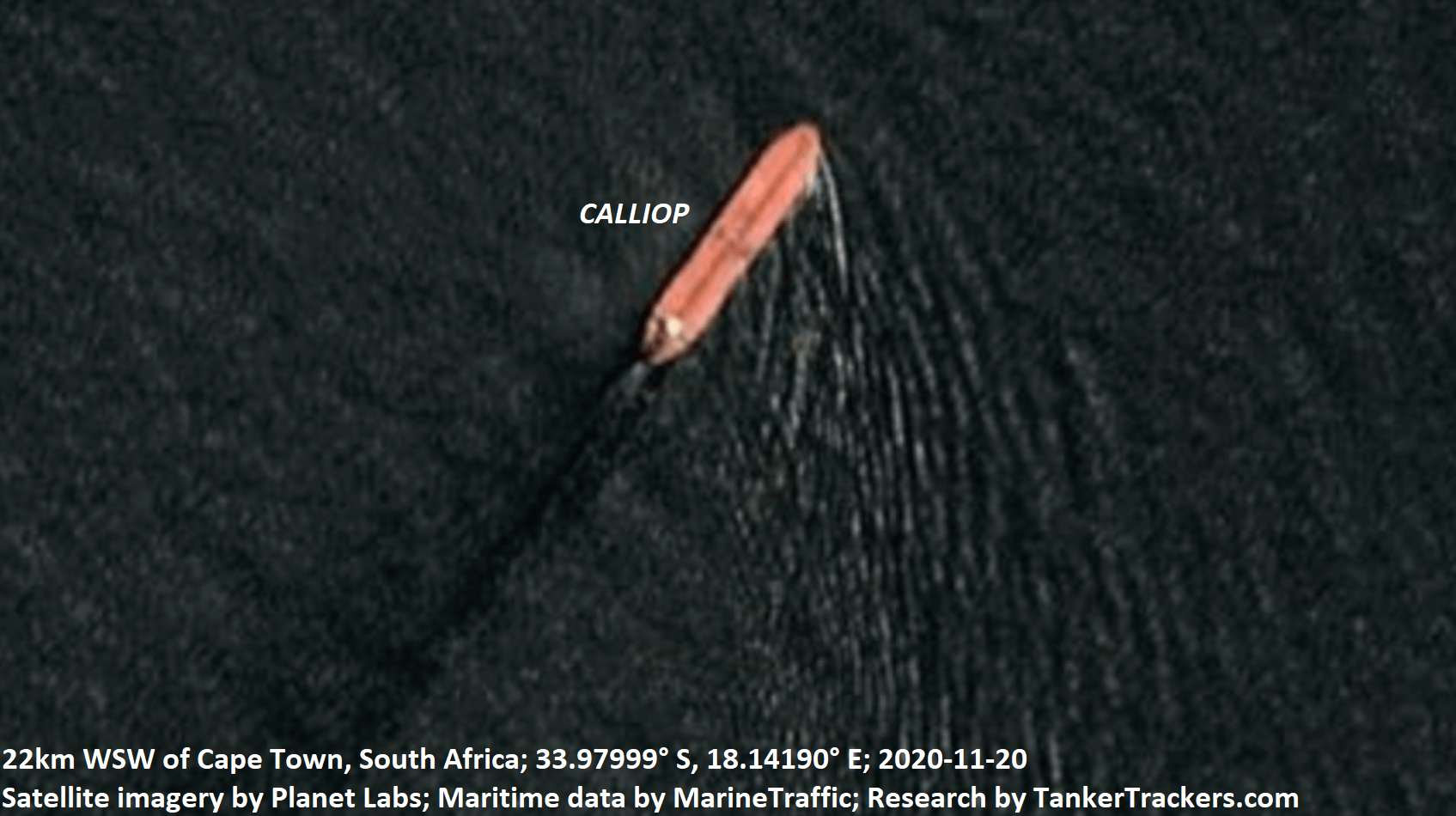 The MMSI 511800000 ping dies on 2020-12-11 just north of the José Terminal, Venezuela. AIS data will show that this is a 12 meter long passenger vessel called JELFAR 1, which has spent Q1 2020 shuttling back and forth between (mainland) Jebel Dhanna, UAE and Sir Baniyas Island just 4km away. 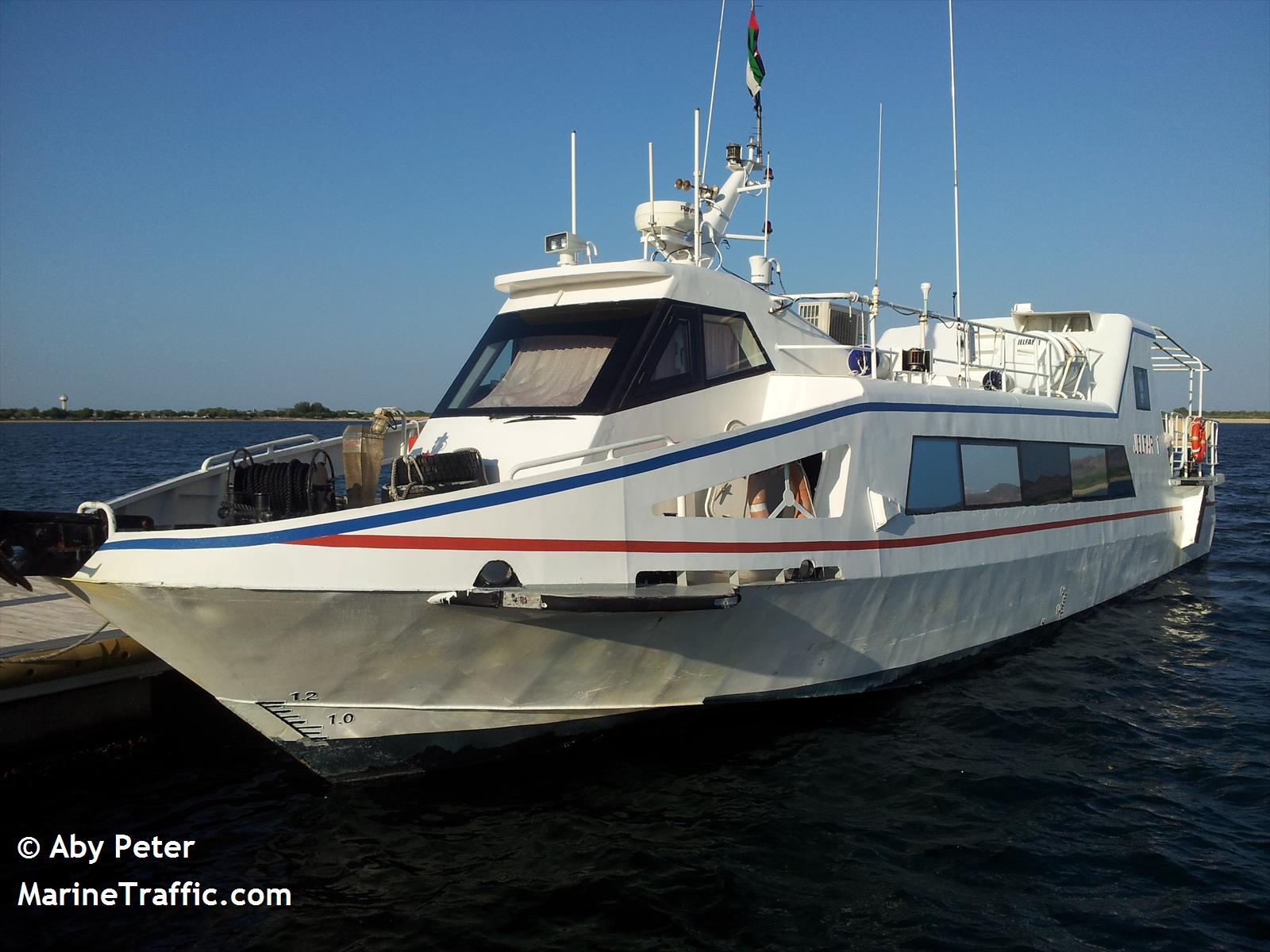 Palau-flagged JELFAR 1, the current owner of the MMSI 511800000. Image by MarineTraffic

When we examined archive photos of the CALLIOP, one detail looked off, and that was the large metal box behind the exhaust. It didn’t look right, but given that IMO2020 (the maritime industry’s goal to cut down on sulfur emissions as of 2020) took effect earlier this year, it means scrubbers had to be installed. We believe this is that scrubber, and after having inspected a more recent photo of the CALLIOP, we were able to spot the new add-on behind the exhaust. It also says in her previous owner’s (ADS, a Norwegian shipping company) annual financial report that they installed scrubbers during 2019 and that saved a lot of money in the long run. 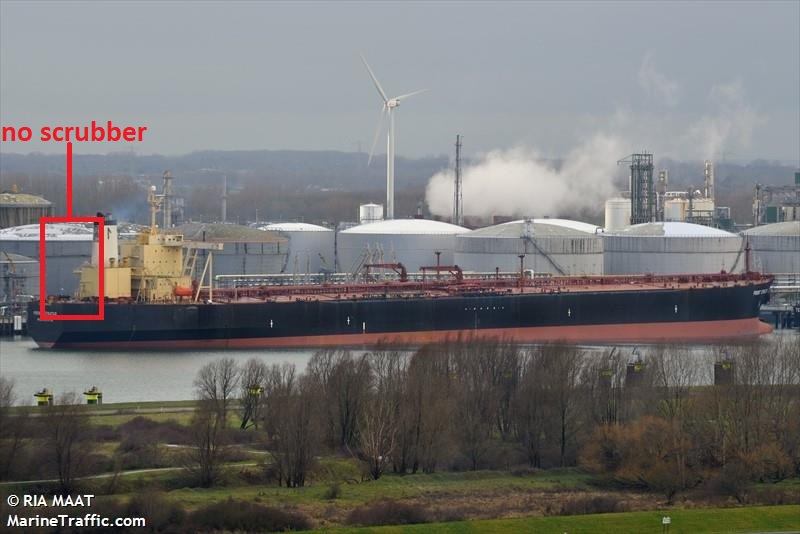 On the late evening of 2020-12-10, the CALLIOP attempted to berth at the José Terminal sea island jetty, but given that there weren’t any tugboats available (sources refer to a wage strike), the attempt was aborted for safety reasons and successfully re-attempted two mornings later after the vessel disappeared temporarily from scene. Indications are that she anchored briefly east of La Barrocha island.

The vessel is currently loading 1.9 million barrels of Merey-16 crude oil and will most likely be sailing off to China on behalf of the NIOC as the trader of this cargo. The CALLIOP is a Liberian-flagged vessel at time of writing. (2020-12-14)

ADDED 2020-12-17 via HEADS UP: By our shadow-depth measurements and eyewitness observations, the CALLIOP is now nearly laden with 1.9 million barrels of Merey-16 crude oil at the José Terminal in Venezuela. This VLCC supertanker is purportedly due to transport Venezuela’s crude oil on behalf of the National Iranian Oil Company (NIOC) to China. We believe she will depart the berth overnight and likely sail to South Africa with her AIS transponder switched off until reaching Cape Town in about 3 weeks time. Currently, her location is being spoofed from a spot 180 nautical miles WSW of Sao Tome & Principe. That fake vessel AIS trace off West Africa’s coast has all but halted and once the CALLIOP approaches South Africa, we anticipate the fake AIS trace to arrive at the same time in order keep the voyage inconspicuous. At that point, CALLIOP will resume pinging (over AIS) as her true self towards the Strait of Malacca or the Indonesian archipelago.

UPDATE 2020-12-18: We received visual confirmation that the CALLIOP has left the loading berth vessel overnight. Our source at the port as well as proxy data via AIS confirms it. 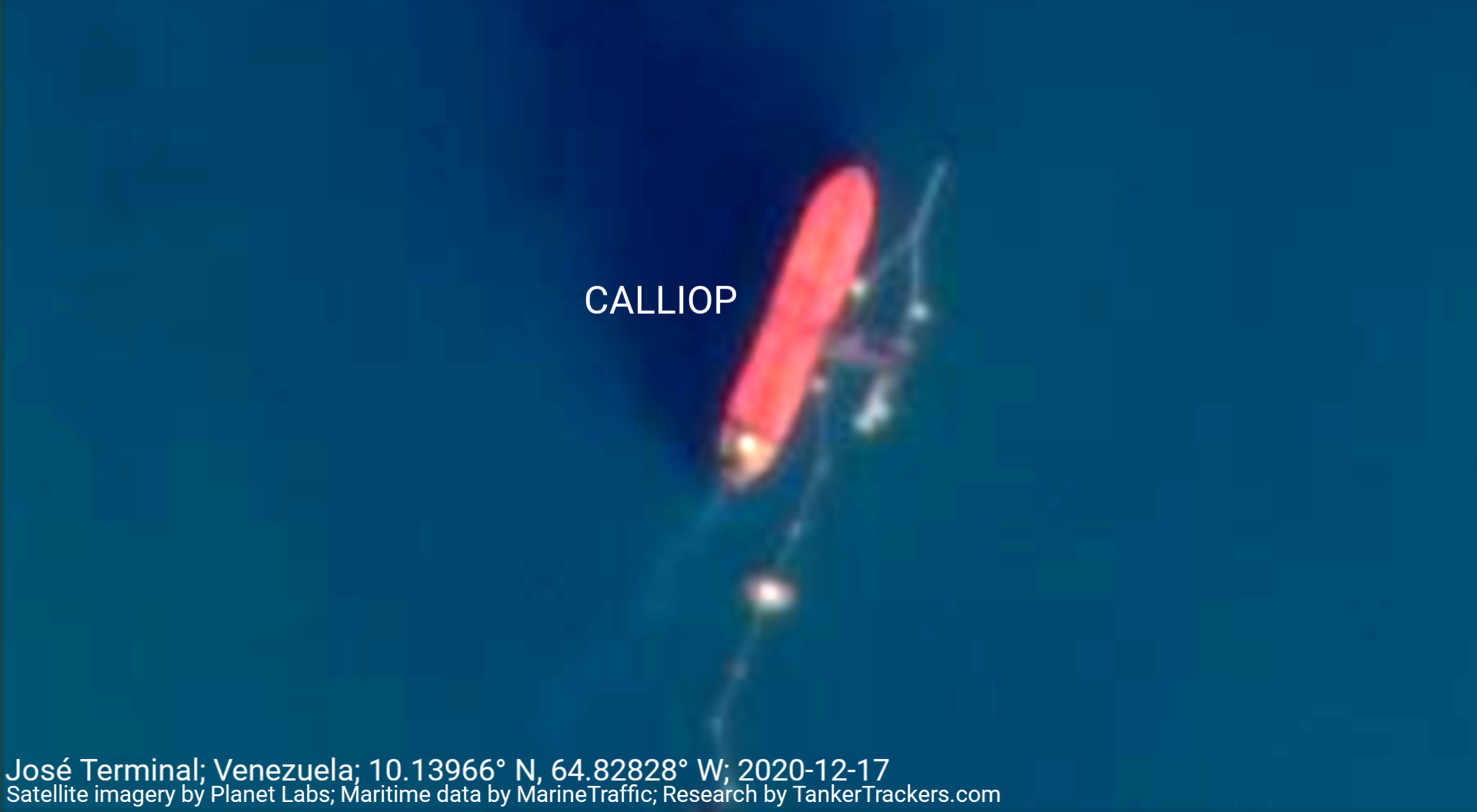 ADDED 2020-12-18 via HEADS UP: PRELIMINARY BREAKING: It seems that the Liberian-flagged VLCC supertanker CALLIOP has now possibly taken on a new identity in Venezuela after completing her loading of 1.9 million barrels of Merey-16. Her new name is SEA CLIFF, and that is the name of an NITC (National Iranian Tanker Company) VLCC which has been offline for a very long time in China. The SEA CLIFF switched her MMSI flag code this morning (2020-12-18) from Panama to Iran after signaling two days ago that she was heading towards Trinidad & Tobago. The vessel is currently 4.5km south of La Barrocha island, north of José Terminal anchorage. While we await for a visual confirmation, we can say that this makes logical sense given that in prior trips, Iranian vessels sailed home back east with their AIS transponders on in order to make sure that any incidents would be publicly documented. The Iranian navy admiral has threated to retaliate against USA and her allies in case of any intercepts with Iranian navy or merchant vessels. This is why they have now switched to the Iranian flag and are now quickly recycling an existing vessel identity, being SEA CLIFF.

ALSO ADDED 2020-12-18 via HEADS UP: We now have visual proof that the CALLIOP is falsely assuming the identity of the National Iranian Tanker Company VLCC supertanker, SEA CLIFF just 4.5km south of La Borracha Island. She is laden with 1.9 million barrels of Merey-16 crude oil, purportedly bound for China on behalf of the National Iranian Oil Company (NIOC) as part of a trade deal.

ADDED 2020-12-25 via HEADS UP The CALLIOP has departed José Terminal, Venezuela sometime during the past 24 hours (2020-12-25). The vessel is not pinging over AIS, either as itself or by any of its false aliases. A risky move given that the vessel is carrying 1.9 million barrels of Venezuelan crude oil purportedly on behalf of the National Iranian Oil Company and bound for China.