“.@KSAmofaEN why are you blatantly trying to undermine U.S. efforts to support the people of #Venezuela? A vessel from #SaudiArabia will arrive Monday in Venezuela to sell #Maduro diluents that he will use to pump & sell crude and generate income for his corrupt regime.“*

His source for that bit of information seems to be an article posted by Platts the previous day, where they drew up the possibility of a Saudi VLCC supertanker supplying diluents (such as naphtha) to Venezuela in order to lighten the heavy crude oil for sake of export.

A firm set of responses trickled in various Saudi sources, beginning with the fleet operator, Bahri:

“Bahri, the national shipping company of Saudi Arabia, clarifies that its oil tanker ‘Abqaiq’ is in ballast condition with no cargo onboard and on her way from the Red Sea to pick up a cargo from the Port of Jose Terminal in Venezuela for one of its regular customers in India. This cargo was contracted on January 9, 2019, well before the U.S. sanctions were imposed against Venezuela on January 28, 2019. The ‘Abqaiq’ voyage is expected to be completed before the end of the exemption period allowed to wind-down agreements.”

And by the Saudi Embassy in Washington DC on February 11th:

@SenRubioPress @marcorubio The national shipping company of KSA, clarifies that its oil tanker is on her way from the Red Sea to pick up a cargo from the Port of Jose Terminal in #Venezuela for one of its regular customers in India. This cargo was contracted on January 9, 2019, well before the U.S. sanctions were imposed against #Venezuela on January 28, 2019. The ‘Abqaiq’ voyage is expected to be completed before the end of the exemption period allowed to wind-down agreements.“

Platts also issued a new article on February 11th, stating that the vessel was compliant with sanctions.

When we examined the ABQAIQ, we can see that she departed on January 20th, just three days prior to Juan Guaido’s self-proclamation as interim president of Venezuela. The vessel left empty (in ballast) of any oil cargo and set sail for the José Terminal. Usually, the diluents are shipped on smaller tankers, and not VLCC’s. One would expect nothing larger than an Aframax (750,000 barrels) or even a Suezmax (1 million barrels), but not a 2 million barrel Very Large Crude Carrier. For us, the dispatch looked normal because we were aware of shipments out of Venezuela aboard Saudi Bahri tankers. Bahri is a publicly-traded fleet operator and serves many masters as a result, including foreign oil importers. What was unusual however, was the pattern. The normal set of routines would be to:

The map below illustrates this typical voyage. A vessel called HABARI did so during 2018. 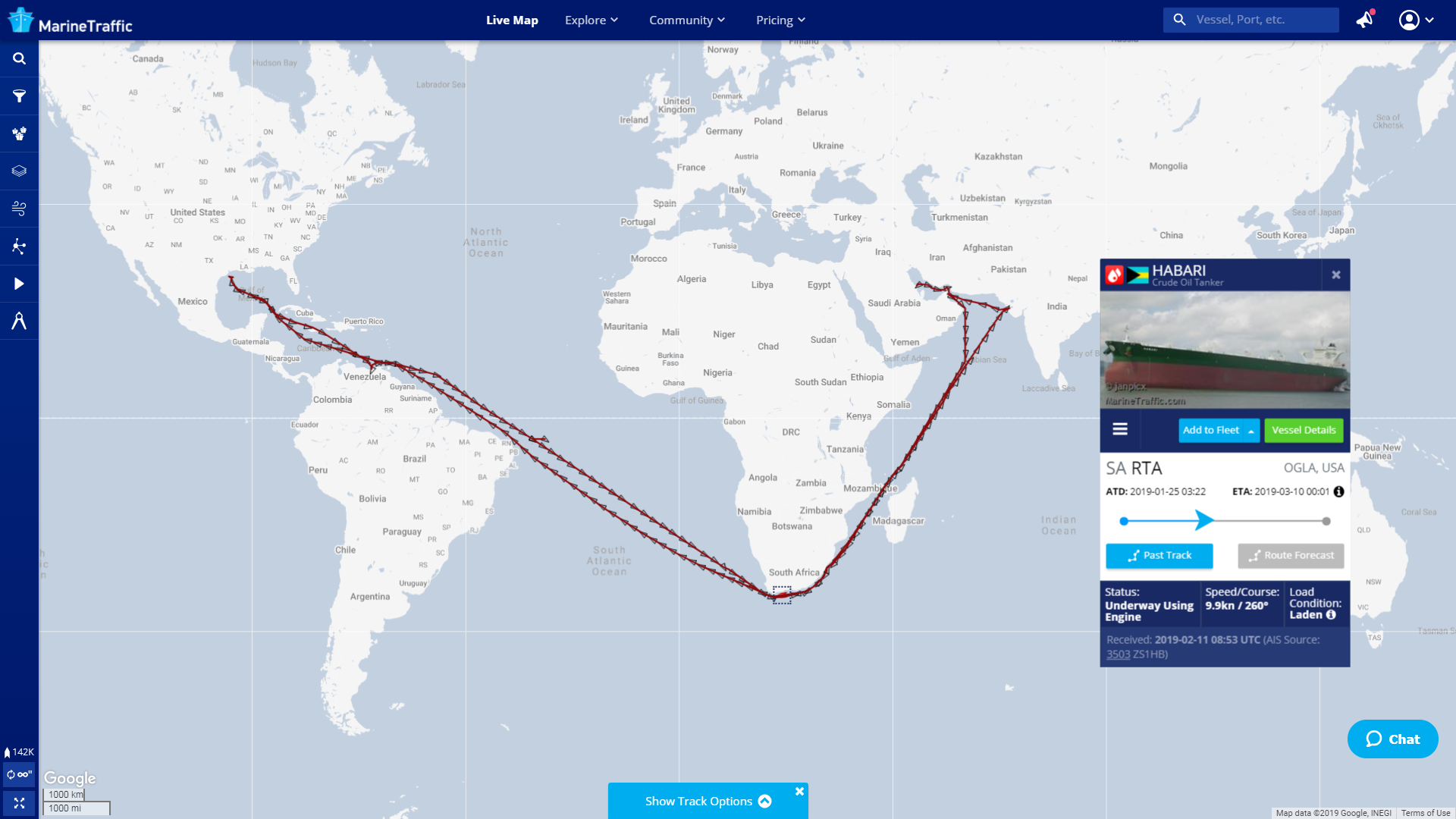 However, in this current case, the ABQAIQ sailed empty straight to Venezuela and did not transport any oil to the United States. For us, this was bigger news on account of the fact that it reflects on Saudi Arabia’s ambitions to cut exports to the United States with an aim to create storage draws in the EIA weekly inventory reports; in hopes of boosting the price of oil. We audit our exports to the US from Saudi Arabia constantly, and the latest data is available here for Premium subscribers. If you wish to become one, you can upgrade here.

After having spent a few days in anchorage, the ABQAIQ set sail two nights ago (February 19th, 2019) for India with 1.9 million barrels aboard, and has specified Durban, South Africa as its next stop. This was normal for the HABARI as well. 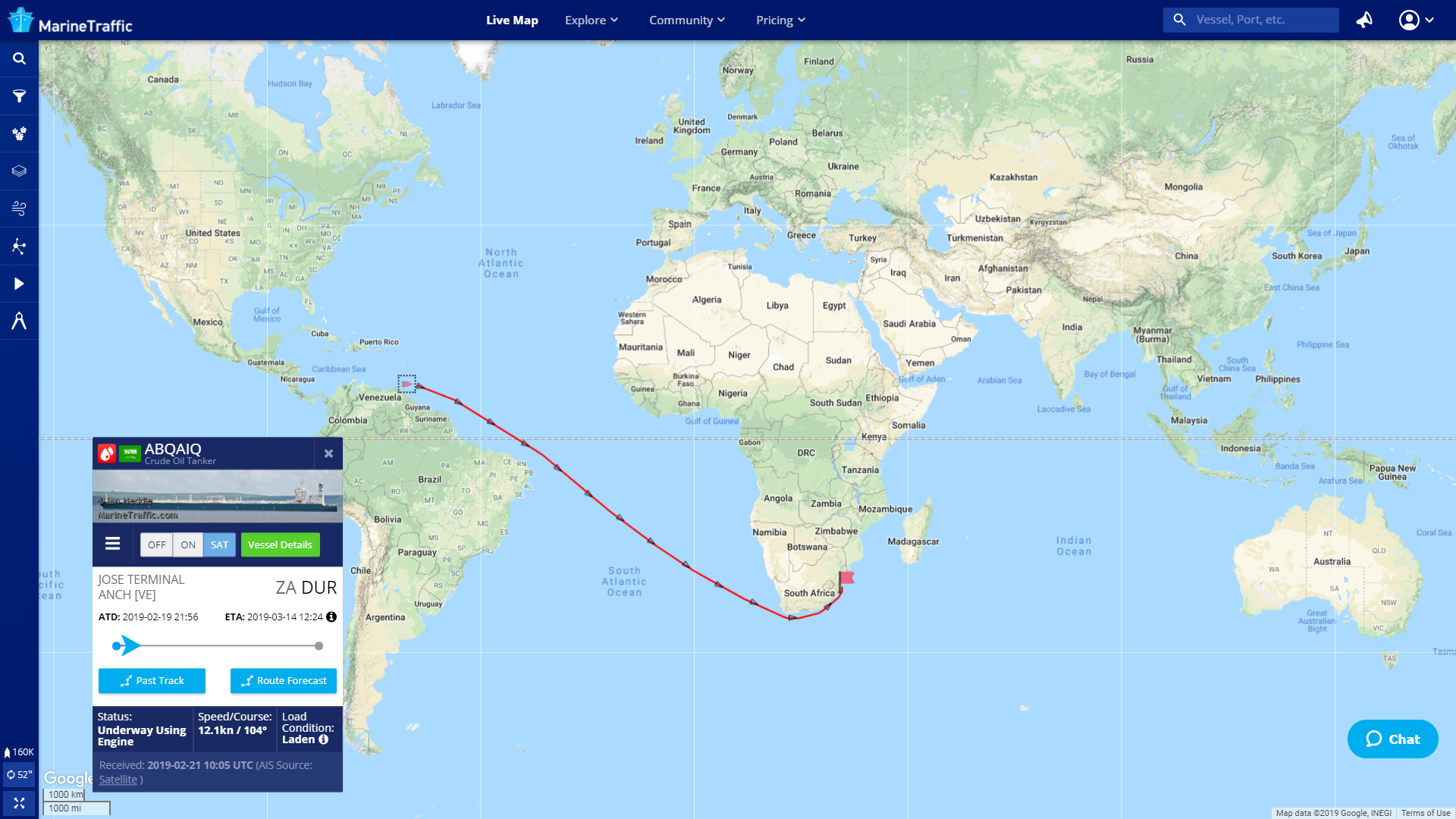