The Reasons for Clandestine Oil Transfers

These past few weeks and months, we’ve talked about “clandestine transfers” in many posts, so we thought it only reasonable to give a bit more of an explanation as to what this is, how it works, why it is done and what kinds of effects this is having.

Unfortunately, many tanker crews out at sea do the irresponsible thing of switching off their AIS transponder, thus hiding them from the most common form of public oversight. They may have their reasons, of course, but there are some fairly important consequences of such actions.

For starters, turning your AIS transponder of can be quite dangerous. AIS was designed as an international standard to help prevent vessel collisions and to improve the ability for vessels to know what other vessels are in their immediate surroundings. If a tanker were to collide while being offline, the rescue crew would have a much more difficult taks of knowing what to expect and where to expect it when responding to a Mayday call for help. They won’t know how many barrels of oil are aboard and where it was heading in case the crew had falsified or hidden the destination. This makes everyone’s job a lot more difficult - as well as much more dangerous. A fairly recent case we can look at is the SANCHI, an Iranian tanker which was transporting gas condensates (classified as a light form of oil and is very highly flammable) from Asaluyeh to Daesan, South Korea. The vessel went offline just north of Taiwan as the crew had (as part of this route’s routine) switched from the public AIS satellite system to a private satellite data uplink called IDP; something we learned from an email exchange with NITC (National Iranian Tanker Company). That means only the NITC in Tehran knew the whereabouts of this vessel. In January, the tanker was struck days later by a grain carrier off the coast of China. The SANCHI burned for an entire week, and the entire crew of 32 perished. The oil spill stretched all the way to the Japanese archipelago of Okinawa.

The second aspect of why it is a bad idea is because it might end up annulling the insurance coverage for that trip - if not void the policy entirely. Although we haven’t heard of any cases of this happening, we can only go as far as to assume that many insurers won’t make noise about it until a tragic incident actually occurs, because the premiums are hard to resist. Still; it’s not difficult to imagine how the media spin on “invisible oil tankers” will encourage the insurance companies to enforce these things.

Let’s have a look at the usual suspects and their standard motives for going offline. In the image below, Israel is represented by the color Blue, Iran is Orange and Saudi Arabia is Green. 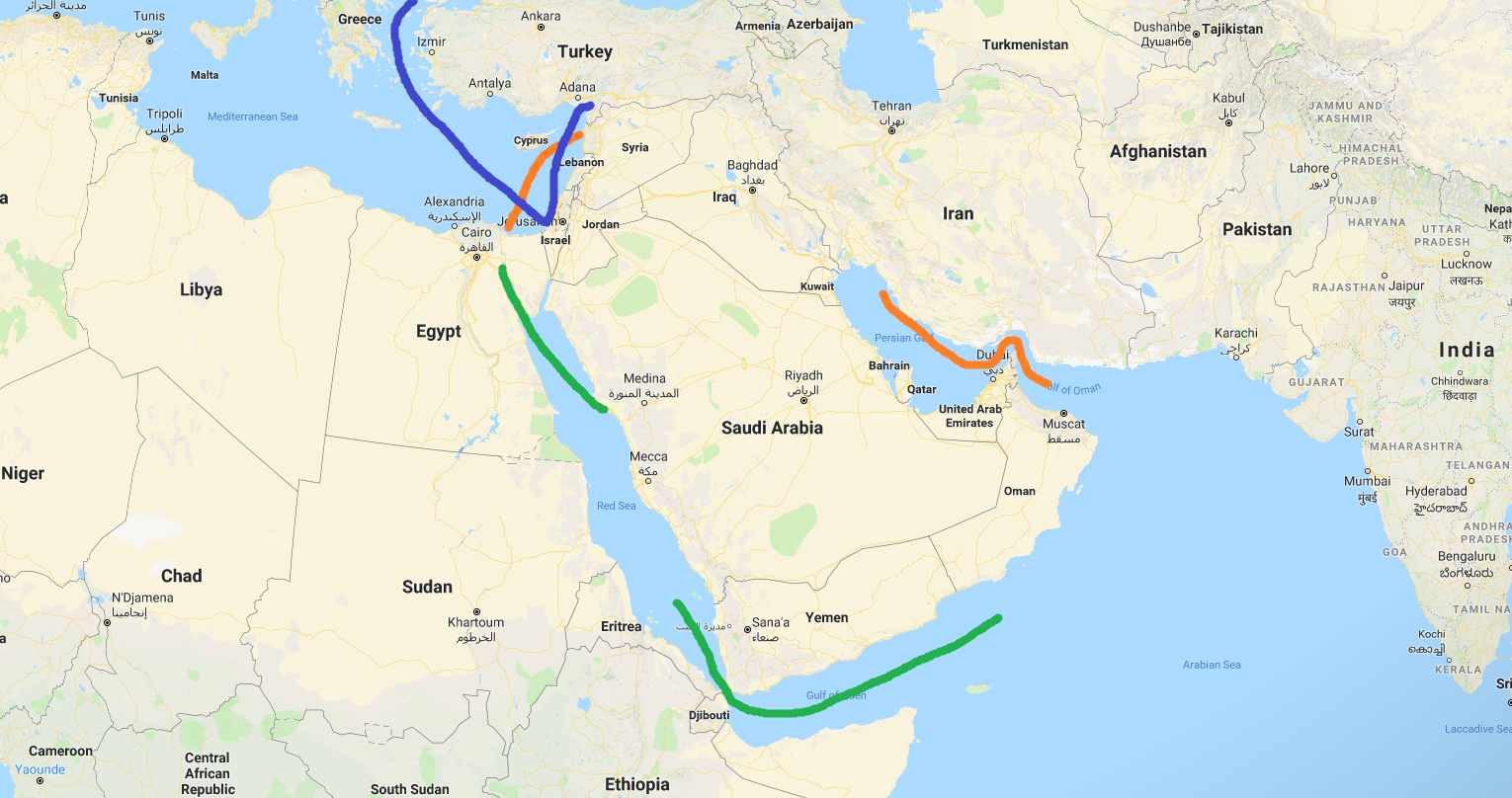 Israel (blue lines) imports approximately 300,000 barrels per day from less than a handful of crude oil sources. The main ones are Russia, Azerbaijan and the Kurdistan Regional Government (KRG) of northern Iraq. All (!) of the imports of crude oil are carried out in a clandestine fashion. Our thoughts are that the vessel owners want to keep Israel off their books in case they have to sail to countries that do not recognize Israel as a sovereign state. The other reason, of course, is that Israel itself doesn’t want to reveal how much oil it is importing, and from where. In the case of the KRG, we know that the federal government of Iraq really doesn’t want Iraqi oil ending up in Israel, so they have threatened to sue tanker operators delivering oil to Israel. We have yet to see a legal case, but have seen them secure a court order in both the United States of America as well as in Canada over an incident in the summer of 2017 when a tanker called NEVERLAND attempted to deliver oil to both countries. It was blocked.

Saudi Arabia (green lines) is the world’s largest exporter of crude oil, moving over 7 million barrels a day by sea. Additional barrels are transported from the east (Gulf) coast to the west along the Red Sea. Some of it is for domestic consumption, such as feedstock for the power plants and refineries. The typical modus operandi for vessels going from coast to coast is to switch off the AIS transponder when sailing along the Yemeni coastline. They typically switch off right before leaving the Saudi or Omani coast and then flip it back on after having left Yemen again. The reason for this is because of the increasing number of attacks by Houthi rebels, but in part also (historically) due to piracy. Now that Saudi vessels are often accompanied by a navy presence, it attracts even more undesired attention to their flag. As for the green line in the Red Sea, this is the shuttling of oil to the SUMED (Suez-Med) pipeline, which begins at Ain Sokhna, Egypt. Unlike the Gulf of Aden, only a few transfers of oil to the SUMED are done in a clandestine fashion. One possible reason for this is because that oil ends up going to North America (mostly USA) and Europe, and it makes it difficult for trackers to find out how much Saudi oil is bound for USA in particular as SUMED has storage tanks on both ends of the pipeline. When a vessel departs from Sidi Kerir (Mediterannean Sea), you can’t be entirely sure whose oil is aboard even if port documentation is provided as we have seen in the past that it hasn’t been a reliable source of information.

Iran (orange lines) is now taking giant leaps of effort to conceal its oil exports as we have explained in another article earlier today. Up until early summer, there were very few cases of any clandestine exports, but we’re now spotting them on a daily basis. In many cases, when departing Iran with oil, they switch off their AIS transponder prior to entering the Strait of Hormuz from the Gulf of Oman and then turn it back on again once they re-entering the Gulf of Oman. Only satellite imagery and trajectory lines from the AIS logs offer enough information of the what, where and how much. As for the orange line in the Mediterranean Sea, this leg is between Port Said, Egypt and Baniyas, Syria. As the Suez Canal requires vessel operators to keep their AIS transponders online at all times, Iranian oil tankers switch theirs off as soon as they leave Egypt’s waters when heading for Syria. As we stated in our previous article, Iran doesn’t need to keep these transfers clandestine, yet chooses to do so. One reason is because they don’t want the US to use it against them. The other is that they don’t want their own population to know that the potential of a couple billion dollars of annual revenue is being missed; especially now that there have been protests in southwestern Iran over water shortages.

We believe there’ll be a lot more cloaked passages in the coming future as things heat up geopolitically.