Reconstruction of Events: 2 Million Barrels of Suspected Iranian Crude Oil Seized by the US Department of Justice (updated 2021-03-16)

Please note that this reconstruction is based on the details specified in the affidavit document filed by the United States Department of Justice. A general outline of the complaint is available here.

The excerpts below cover the vessels and STS (Ship-to-Ship) transfers. We have visualized them thanks to high-frequency satellite imagery captured by Planet Labs. AIS maritime data was gathered using MarineTraffic.

These are the vessels listed in the affidavit:

Given the complicated nature of what transpired, we have visualized the timeline of the initial oil loadings. 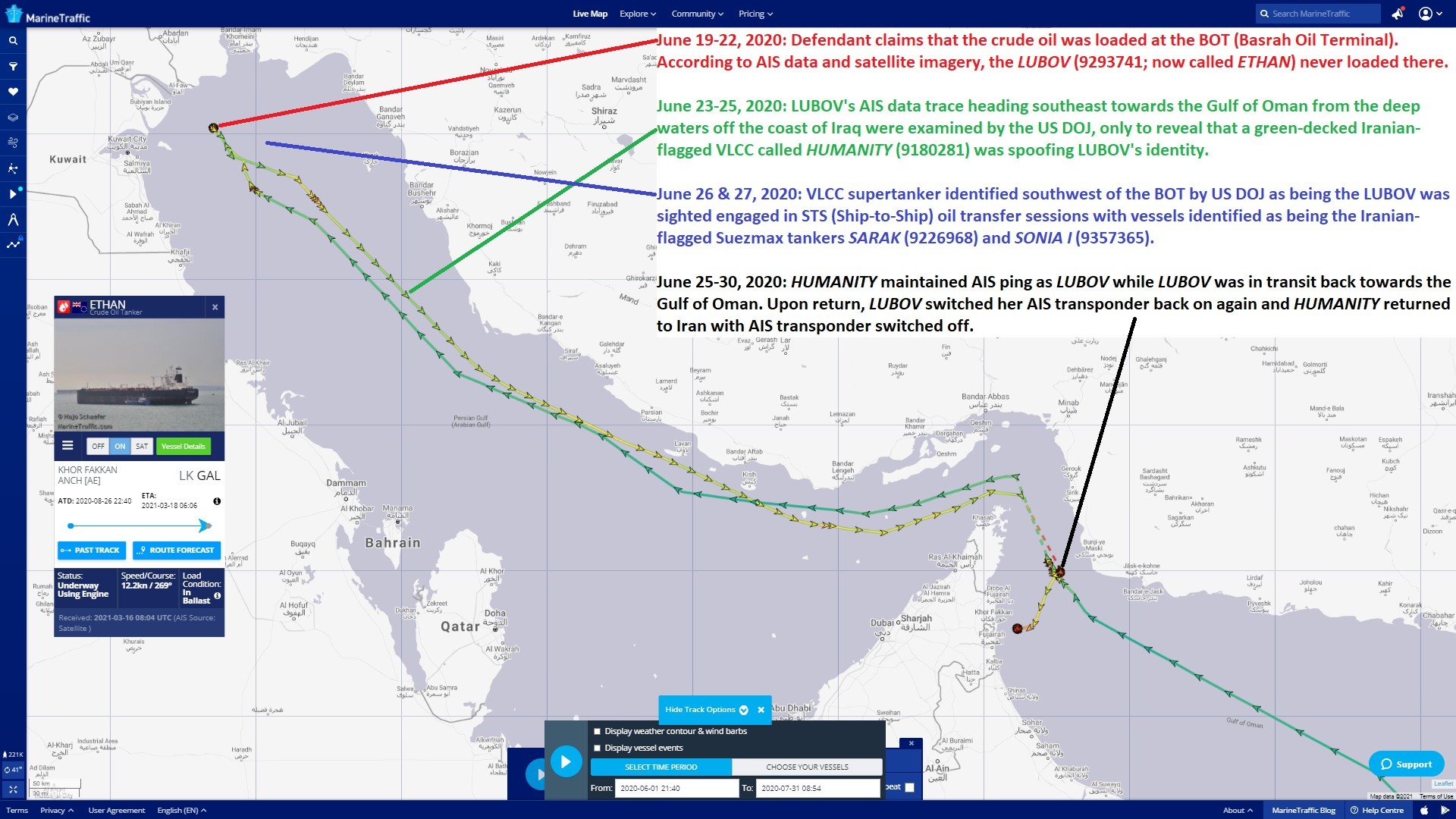 THE SARAK LOADED PART OF THE DEFENDANT PROPERTY AT SIRRI ISLAND, IRAN.

15: On or around May 29, 2020, a Suezmax oil tanker, the M/T SARAK (IMO No. 9226968) (the “SARAK”), loaded part of the Defendant Property at the Sirri Island oil terminal in Iran. According to IMO, the SARAK is registered in the Marshall Islands and is owned by Yam Shipping Inc. 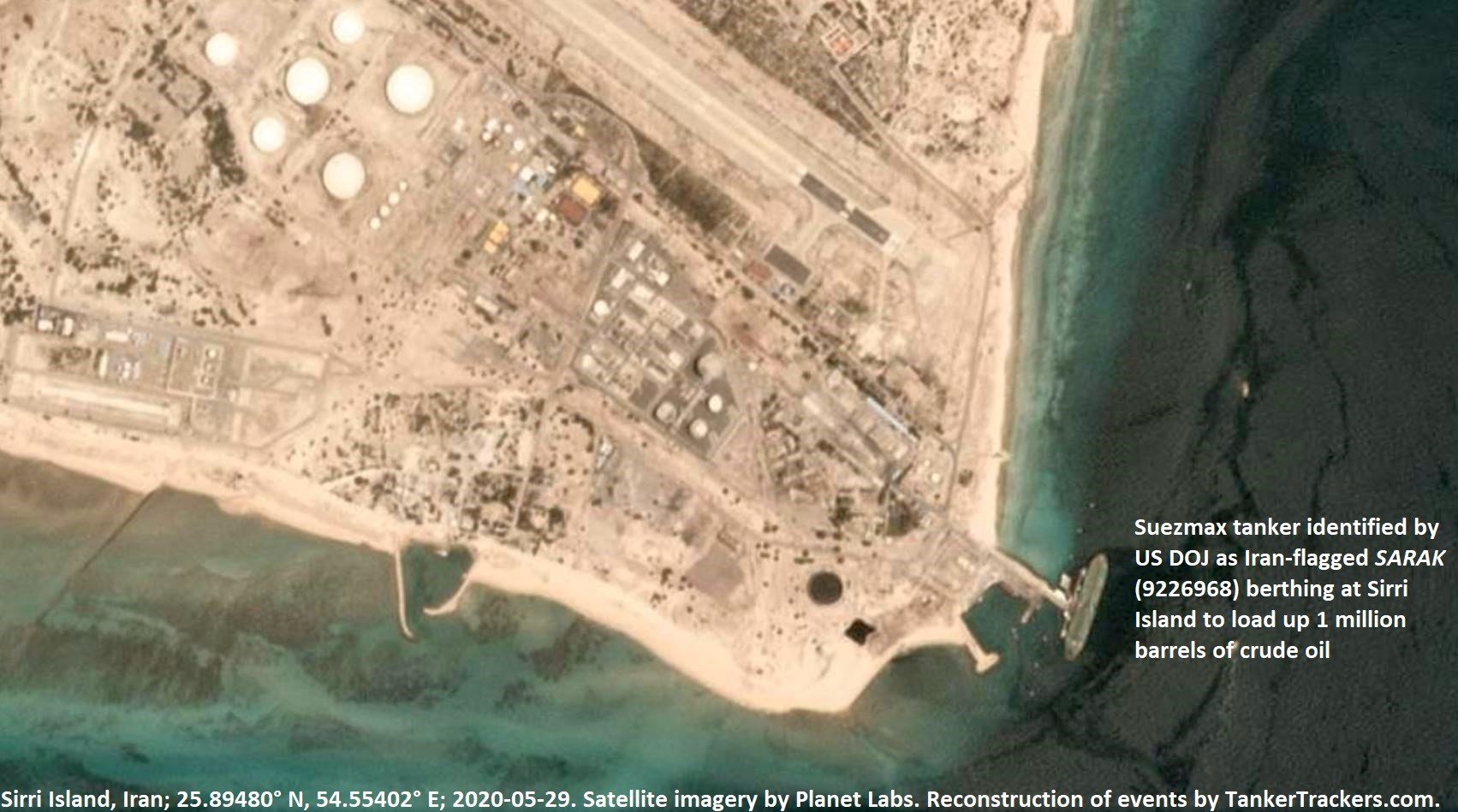 16: On September 4, 2019, OFAC added the SARAK to the SDN list for being a part of a large shipping network that is managed by senior IRGC-QF official and former Iranian Minister of Petroleum Rostam Qasemi and that financially supports the IRGC-QF and Hizballah. See https://home.treasury.gov/news/press-releases/sm767.

17: According to a reliable confidential source, the SARAK is affiliated with the IRGC-QF and ships Iranian oil for NIOC.

THE SONIA I LOADED PART OF THE DEFENDANT PROPERTY AT KHARG ISLAND, IRAN. 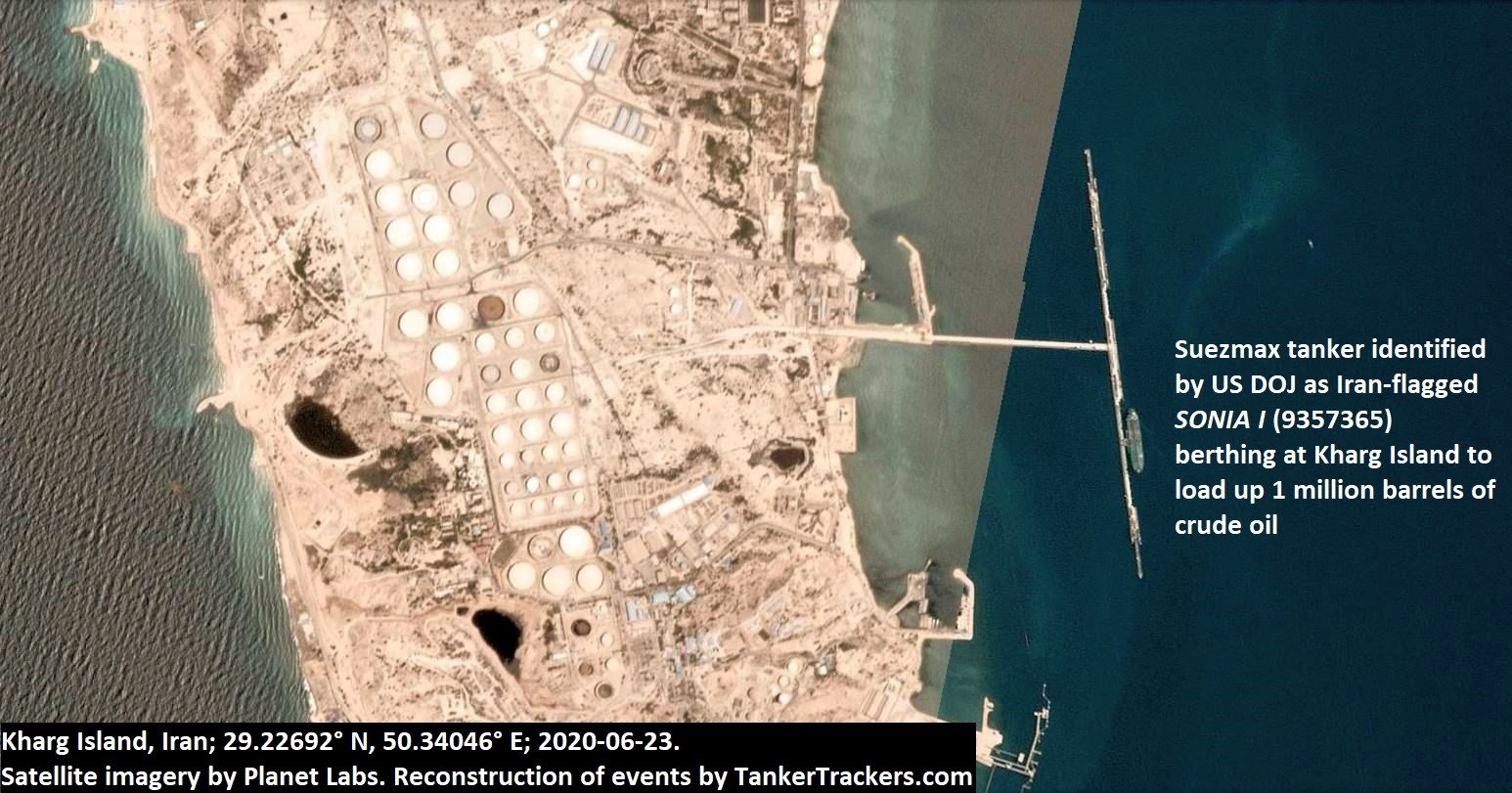 THE LUBOV RECEIVED THE DEFENDANT PROPERTY IN SHIP TO SHIP TRANSFERS WITH THE SONIA I AND SARAK WHILE A DECOY NITC SHIP PROVIDED FALSE AIS DATA TO DISGUISE THE LUBOV’S LOCATION.

21: AIS is a system that transmits a ship’s position so that other ships are aware of its position and can avoid collisions. AIS spoofing is a technique where a ship manipulates its AIS transponder to transmit false data such as a ship’s location or name.

22: On June 12, 2020, the HUMANITY reported her position over AIS in the Gulf of Oman at GPS Position 25.37113N, 56.56983E. Subsequently, the HUMANITY shut off her AIS transponder. Based on satellite imagery, law enforcement can confirm that the HUMANITY sailed up the Persian Gulf in order to temporarily assume her new identity as the LUBOV. 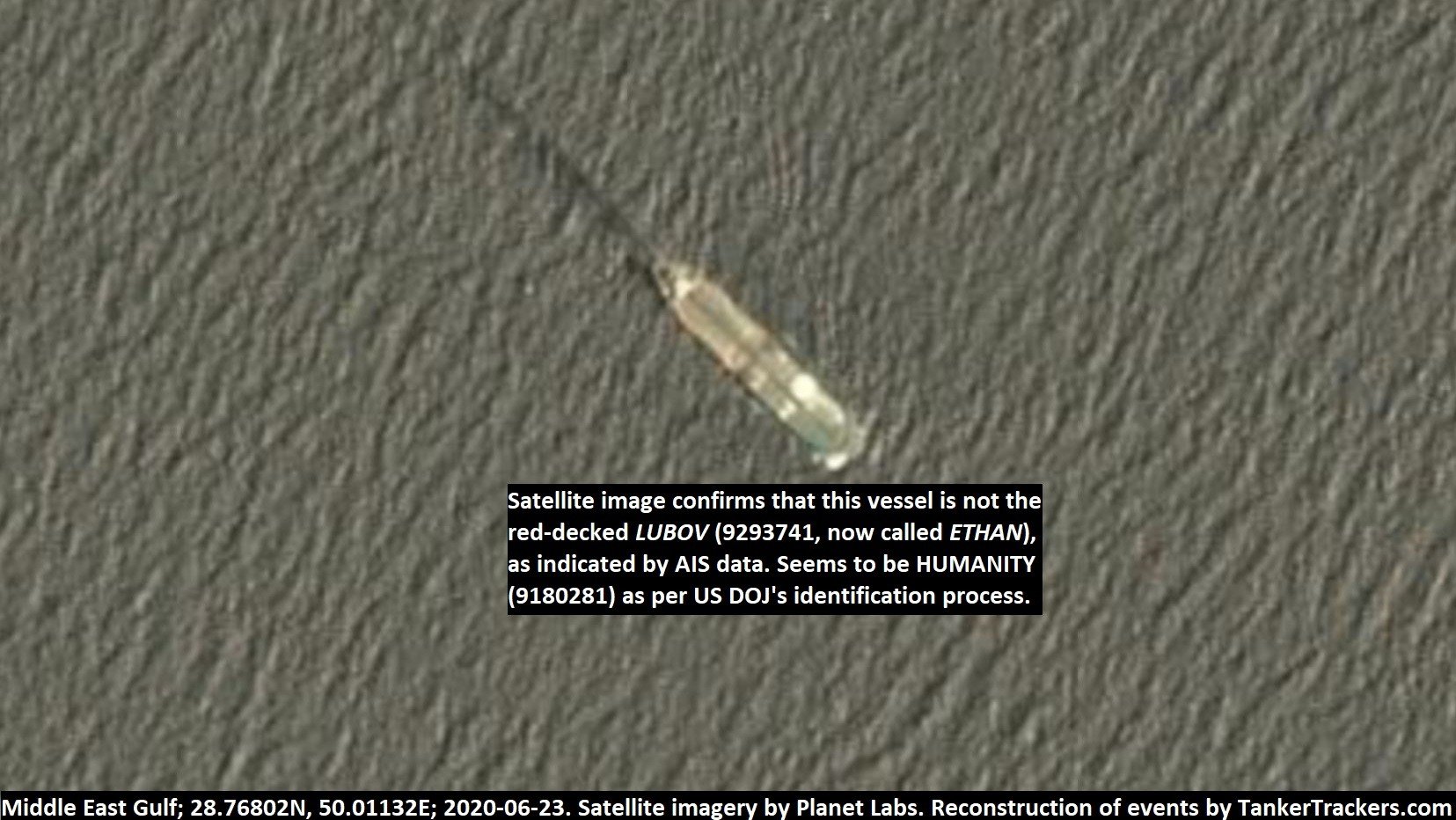 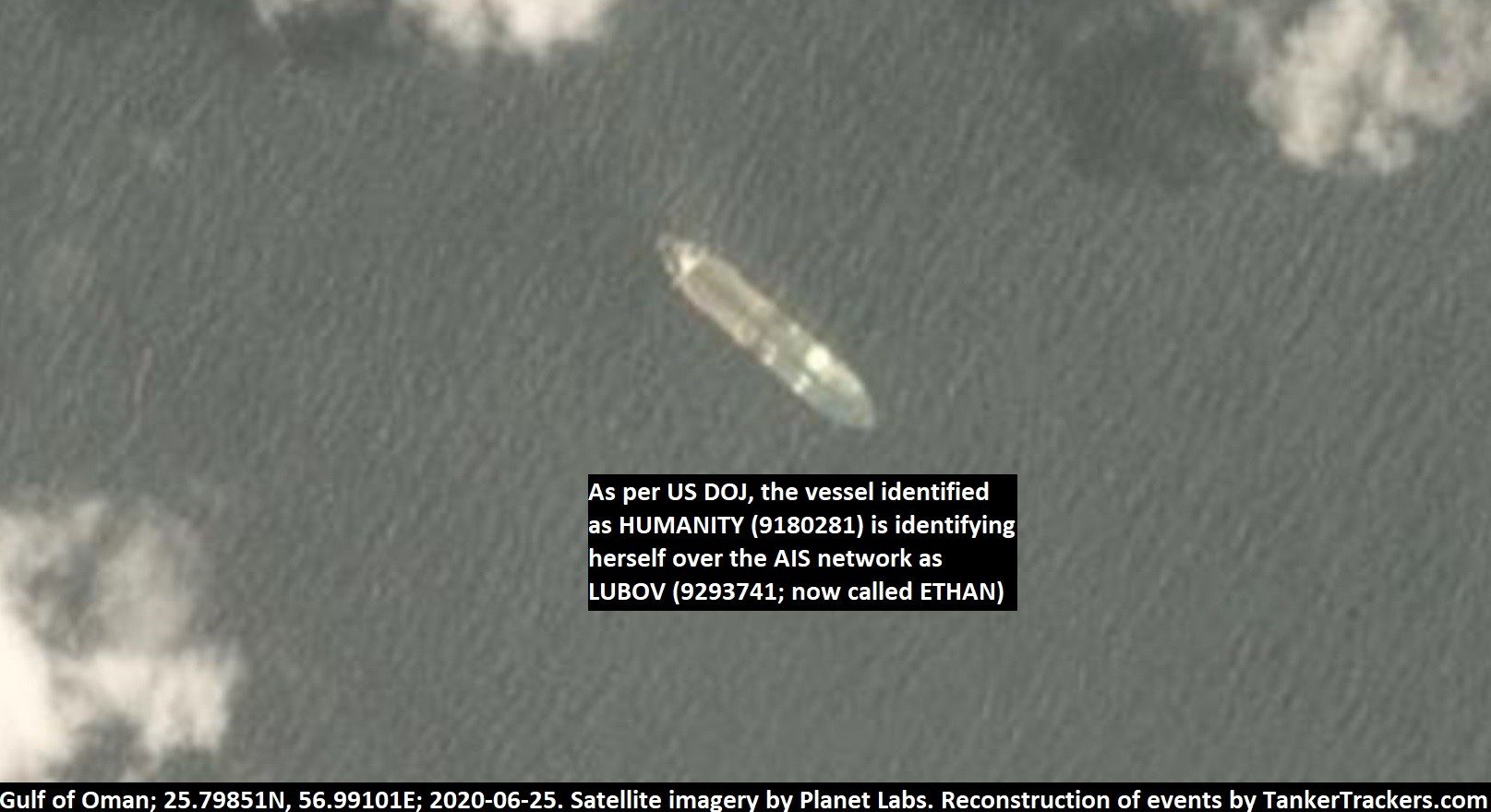 24: According to satellite imagery received by law enforcement, while the HUMANITY spoofed its AIS, the LUBOV, with her AIS transponder switched off, sailed southeast, a short distance from her original position to GPS Position 29.40953N, 49.32116E, appearing in satellite imagery on June 24, 2020. 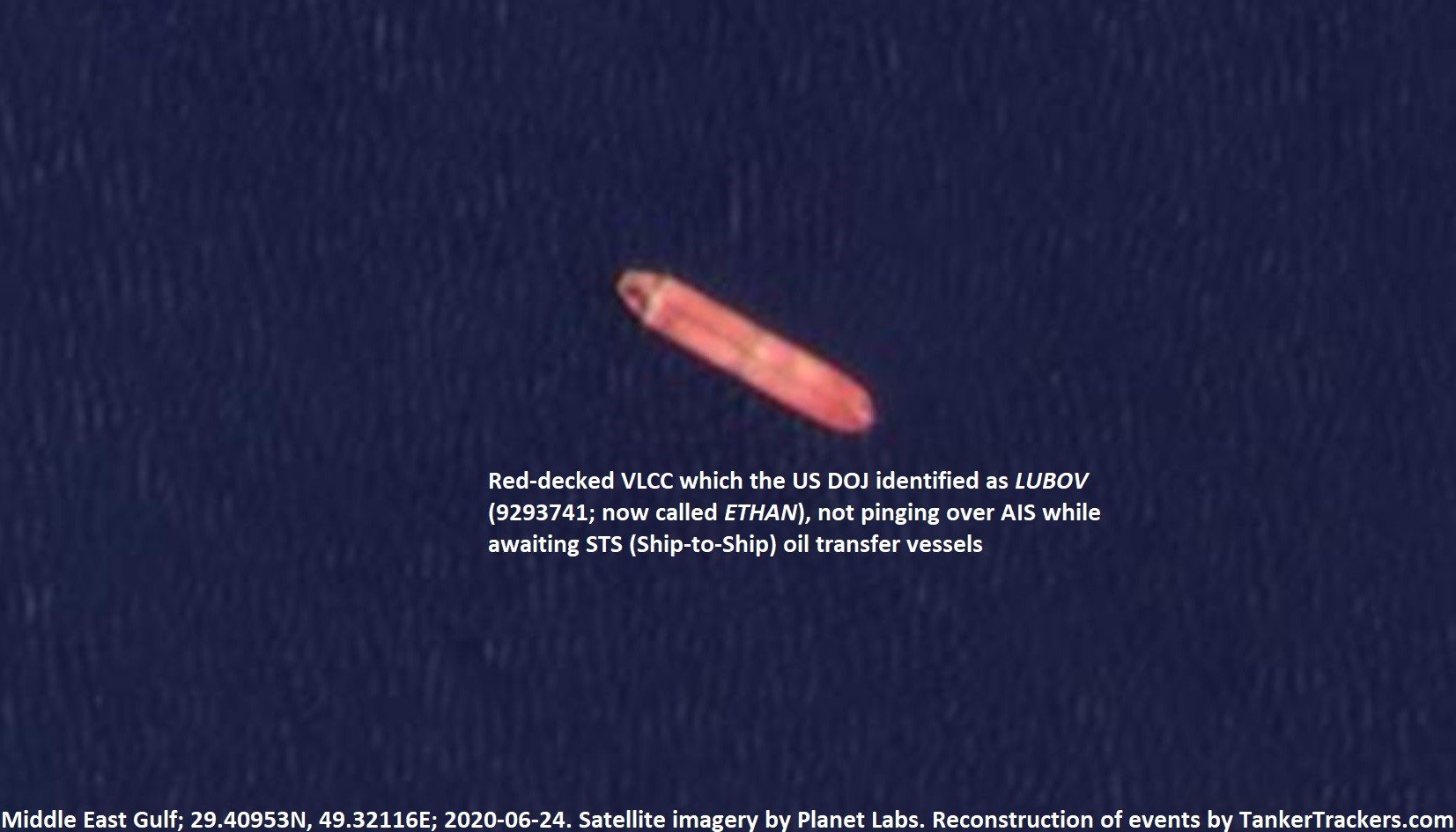 25: On or around June 26, 2020, the LUBOV conducted a ship-to-ship transfer with the SARAK, receiving part of the Defendant Property. 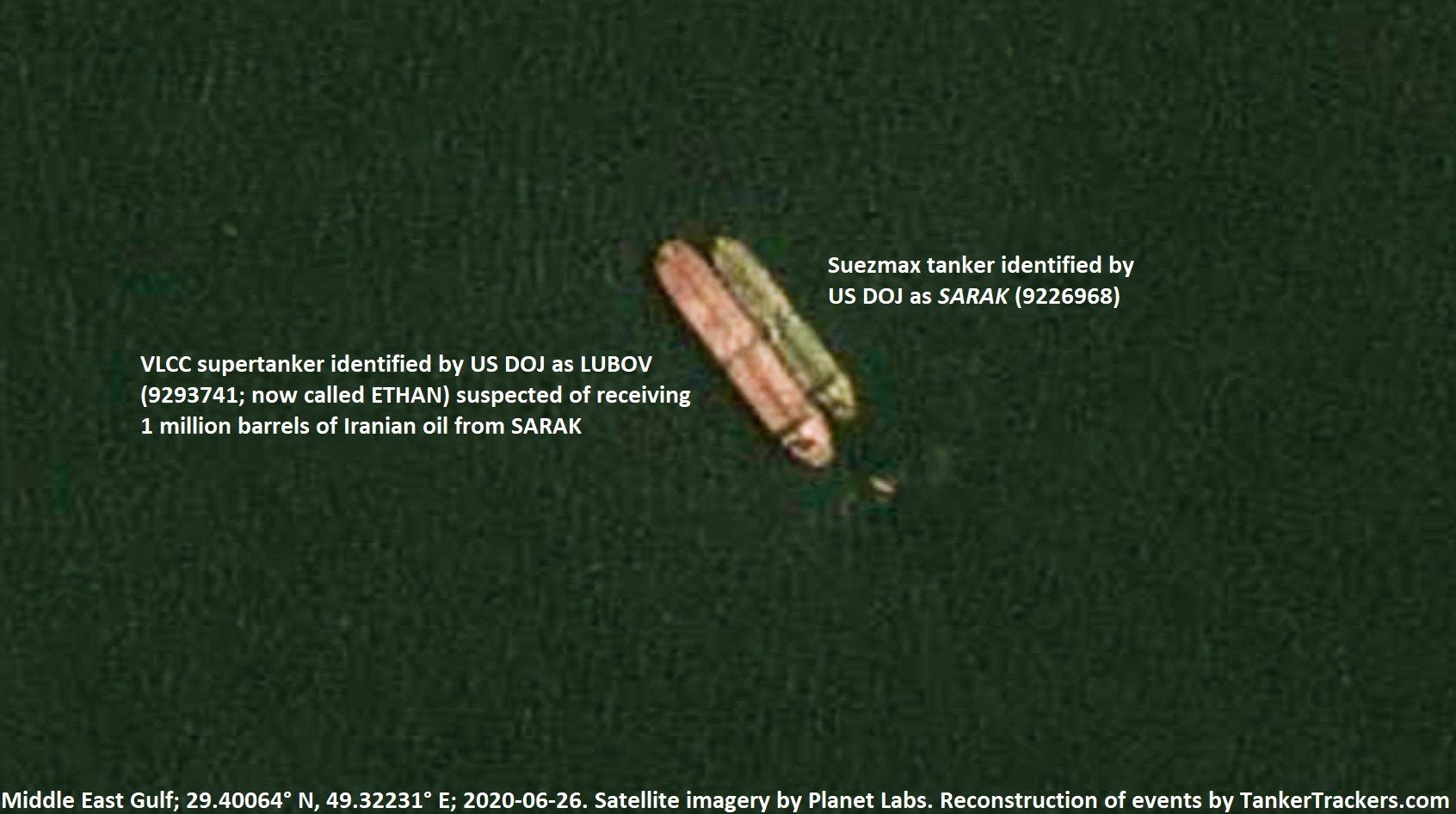 26: On or around June 27, 2020, the LUBOV initiated a ship-to-ship transfer with the SONIA I, receiving the remainder of the Defendant Property. 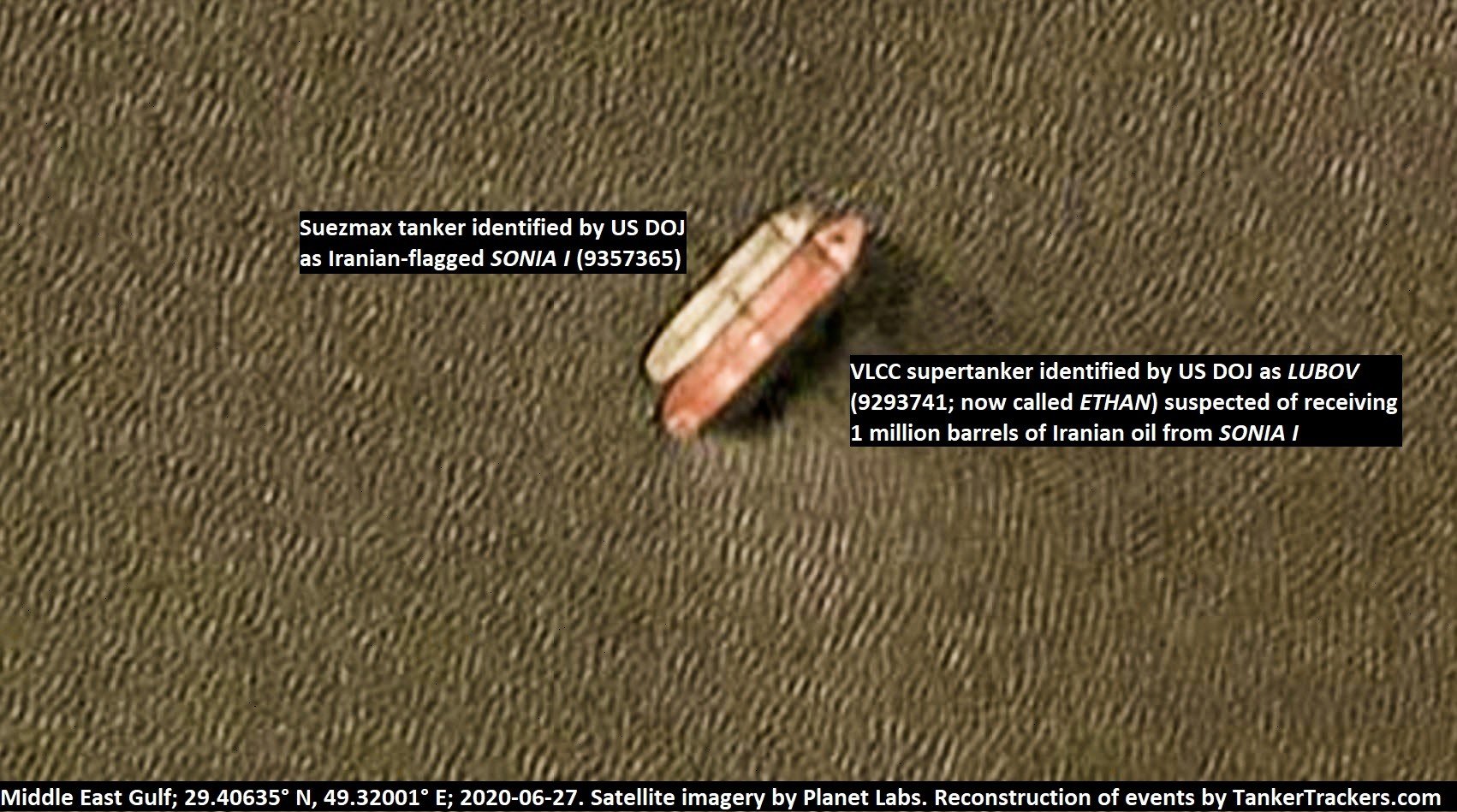 THE LUBOV TRANSFERRED THE DEFENDANT PROPERTY TO THE TRIDENT LIBERTY IN A SHIP TO SHIP TRANSFER.

29: Beginning on or around August 19, 2020, the LUBOV transferred the Defendant Property to a then Panamanian-flagged VLCC supertanker, then named the TRIDENT LIBERTY (IMO No. 9327072) (n/k/a the LIGERA) (the “TRIDENT LIBERTY”), in a ship-to-ship transfer in the Gulf of Oman, off the coast of Khor Fakkan, UAE, GPS Position 25.36104N, 56.42906E. The transfer took five days to complete. After the ship-to-ship transfer, the TRIDENT LIBERTY updated her AIS information to indicate that she was fully laden with two million barrels of oil that she received from the LUBOV. 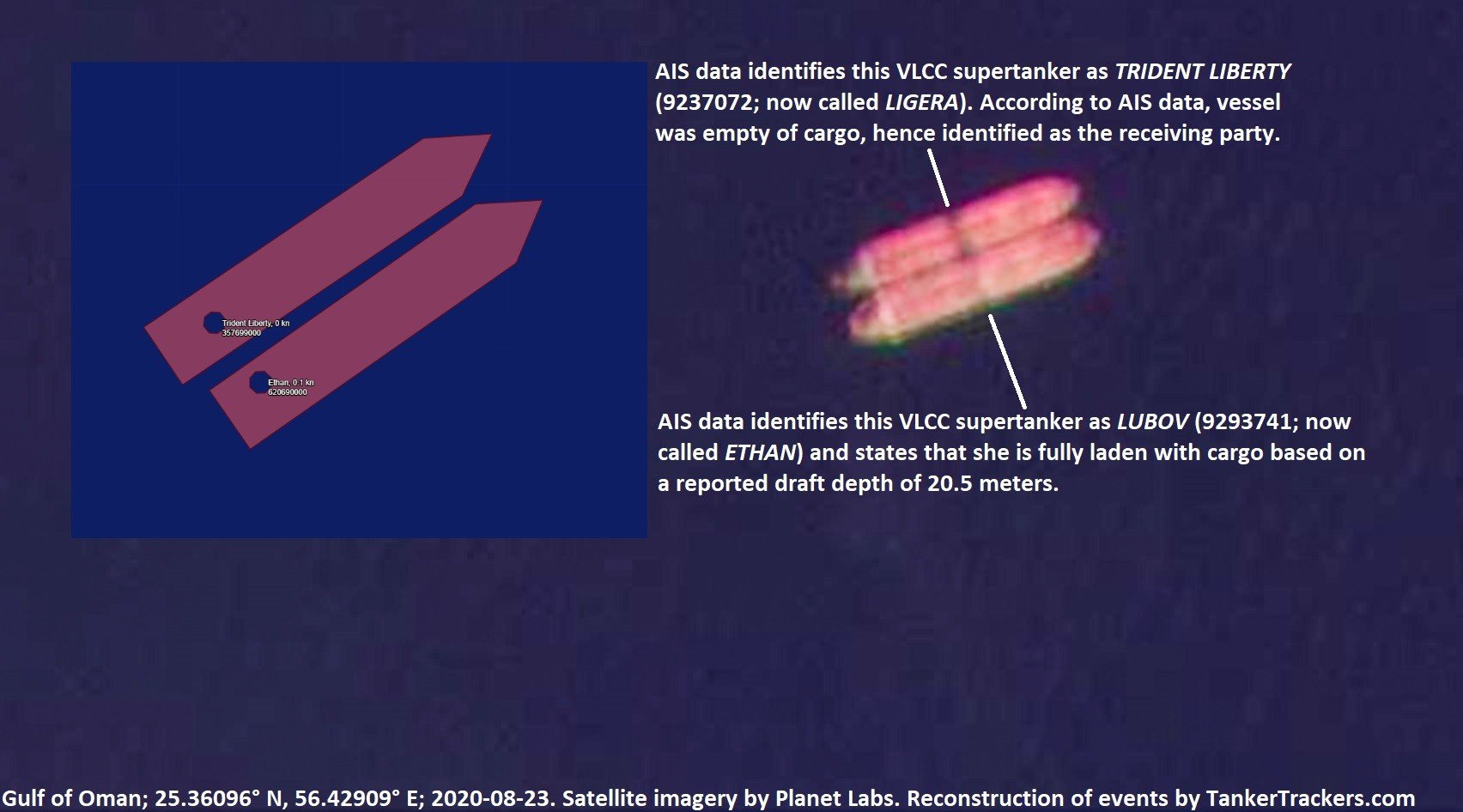 30: After the receiving the Defendant Property from the LUBOV, the TRIDENT LIBERTY drifted off of the coast of Oman from August 24, 2020 until November 4, 2020.

THE TRIDENT LIBERTY TRANSFERRED THE DEFENDANT PROPERTY TO THE ACHILLEAS IN A SHIP TO SHIP TRANSFER.

31: On or around October 14, 2020, the purported chartering party, Fujairah International Oil and Gas Company (“FIOGC”) entered into a charter agreement with Achilleas Carriers Corp., the owner of the ACHILLEAS, to carry “Basrah light crude oil” to China. FIOGC provided a fraudulent bill of lading indicating that the LUBOV loaded the Defendant Property at Basrah Oil Terminal, Iraq. 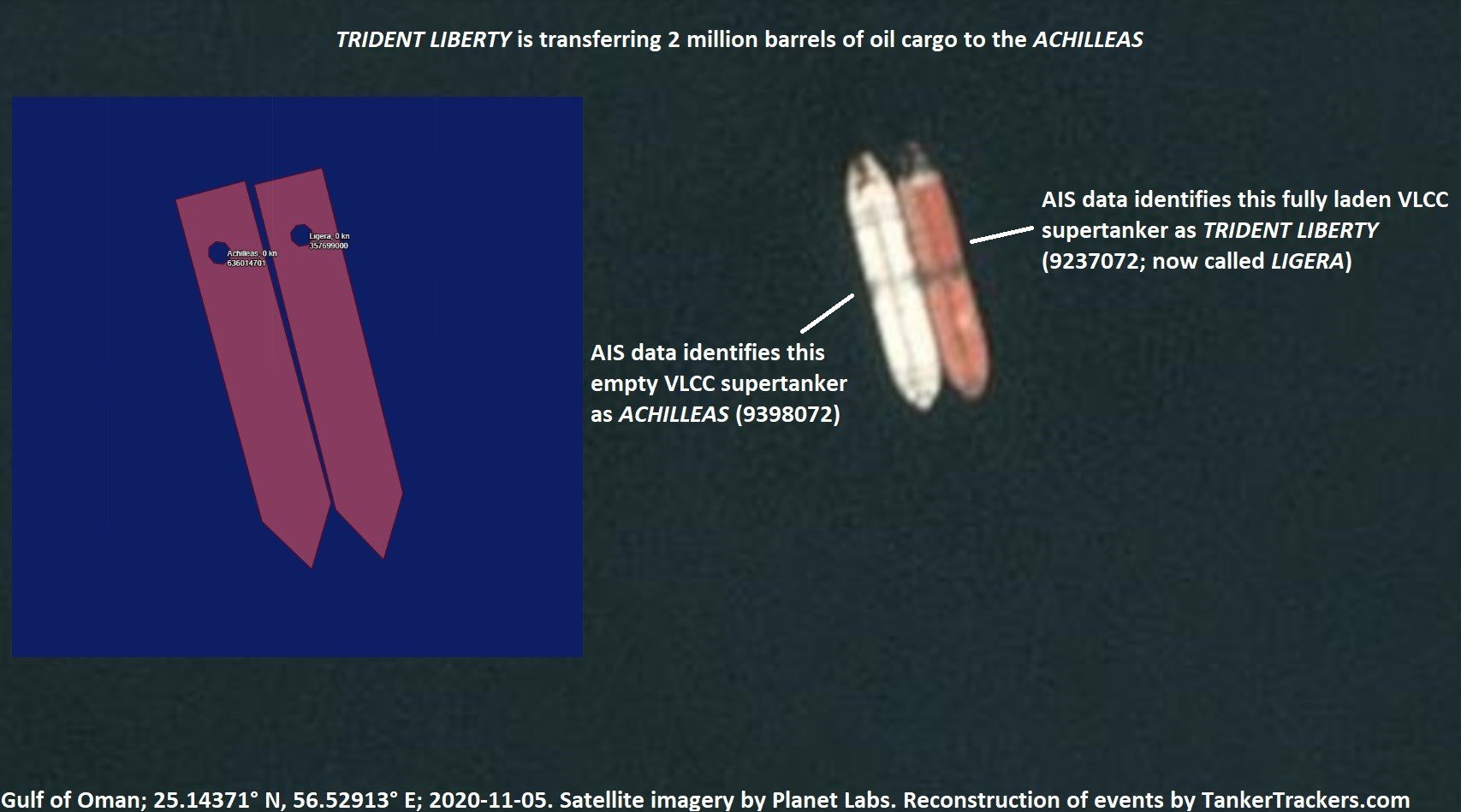 According to AIS data transmitted by the LUBOV (now called ETHAN); the vessel reported that it was going to the “KAZ IQ” on June 17th, 2020. KAZ is an abbreviation for Khor Al-Zubayr (anchorage in this case), where STS (Ship to Ship) transfers often occur. There are no oil berths there for the vessel to load oil from; such loadings take place at the ABOT/BOT (The Al-Basrah Oil Terminal), an offshore, deepwater set of berths from a standalone jetty that is also surrounded by satellite SBM (Single Buoy Mooring) stations. When we examined the area for the red-decked LUBOV, we did not find her there between June 20th and June 22nd. Her AIS data does not show her at the ABOT/BOT either. She was pinging 11km south of the ABOT/BOT between June 20th and 22nd, as verified by satellite imagery captured on June 21st. AIS data also says that the vessel is fully laden (from 11m to 20.5m deep) on the evening of June 22nd, when in fact wasn’t.

And an illustration of the news published by some international press agencies that the Fujairah International Oil & Gas Corp (FIOGC) bought a quantity of Iraqi crude oil loaded from the Basra oil port during the month of June of last year 2020 on board the tanker (Lubov IMO 9293741). After that, its name changed to (Ethan IMO 9293741) and it bears Iraqi shipping documents according to the numbered bill of lading (No. 25-0408-BBL / 1973/2020) to be sold in the US market and transported on board the tanker (Achilleas IMO 9398072).

The Oil Marketing Company (SOMO) confirms that it is the only party exclusively authorized to export crude oil and all petroleum products, and that it categorically denies that the shipment of crude oil transported on the back of the two aforementioned tankers by the Fujairah International Oil & Gas Corp (FIOGC) of Iraqi origin, and in the event that Circulating shipping documents bearing the logo and seals of the Oil Marketing Company (SOMO) for these shipments, as they are considered forged and incorrect documents, and the aforementioned company bears all legal consequences.