Last week, the Wall Street Journal posted a story about a tanker that sat off the northern coast of Sicily for three weeks with oil that was rejected by its importer, the Italian oil company, ENI. The reason why the refinery in Milazzo had rejected it was because the oil cargo that was tested did not have the exact qualities they had originally ordered from Iraq via a Nigerian trade agent called Oando PLC. Instead, the lab results showed characteristics typically found in Iranian oil. The vessel in question is the WHITE MOON.

After ENI faced Italian senate hearings about the origin of this oil, Oando’s trading general manager had stated that both ENI and Oando had approved the cargo at point of loading after a joint inspection but had then discovered that the oil did not match sulphur specifications at point of delivery. Yes, that seems very odd.

Here’s what we saw:

May 2nd, 2019: A permanently stationed VLCC (Very Large Crude Carrier) called NEW PROSPERITY was anchored in the anchorage of Umm Qasr, Iraq. This area is used for STS (Ship-to-Ship) transfers of oil between larger and smaller vessels. One usually sees things like refined products such as fuel oil and gasoline/diesel, but also crude because smaller vessels can’t pick up the oil from the ABOT (Al-Basrah Oil Terminal) as it is mostly used by the VLCC’s and Suezmax (1 million barrel) tankers. The NEW PROSPERITY was engaged in an STS session with an Aframax (typically max 750K barrels) tanker we identified as the ABYSS. This vessel carries the flag of Vietnam and we see her frequently running cargo to and from this area in a fairly sinister fashion because she has constant AIS outages. Most of her trips are to either Umm Qasr anchorage in Iraq or to Iran’s ports of Bandar Khomeini and Mahshahr. From there, she delivers to recipients in the anchorage of Fujairah and Khor Fakkan, UAE. In this particular session, we can see from the AIS data that NEW PROSPERITY receieved roughly 600K barrels of oil from the ABYSS.

May 4th, 2019: Now that the ABYSS had sailed away, we can see the red Suezmax WHITE MOON engage in an STS session together with NEW PROSPERITY. This went on for two days, and by the 6th of May, we can see that WHITE MOON departed the scene for Milazzo after taking on those 600K barrels of crude.

If we look closer at ABYSS’s AIS activity, it shows a data blackout between April 23rd, 2019 and May 3rd. She is also reporting to be empty of any oil cargo; only carrying ballast (seawater). Given that we have her engaged in an STS session on the 2nd of May, it would mean that she was missing for 9 days prior to that over a distance of only 30.8 nautical miles. Naturally, we checked this stretch visually and found nothing. We then checked Kharg Island during those dates, and found her loading oil on April 26th. That was actually very smart because in Iran there are a few Aframax tankers just like her that shuttle oil between Kharg Island and the refineries in Bandar Abbas, located in the Strait of Hormuz. We normally ignore those because they’re domestic tankers which mostly always keep their AIS transponders on. When we checked the port calls for this (and surrounding) date, we found nothing. The fact that the helipad is located on the port (left) side of the vessel also means that she isn’t an NITC vessel belonging to Iran. The location in which ABYSS switched off her AIS transponder is something we typically see as well for foreign tankers approaching Kharg Island. They try to make it look like they’re going to Iraq when in fact they’re visiting Iran. This was the case for all three Chinese VLCC’s we caught in May. 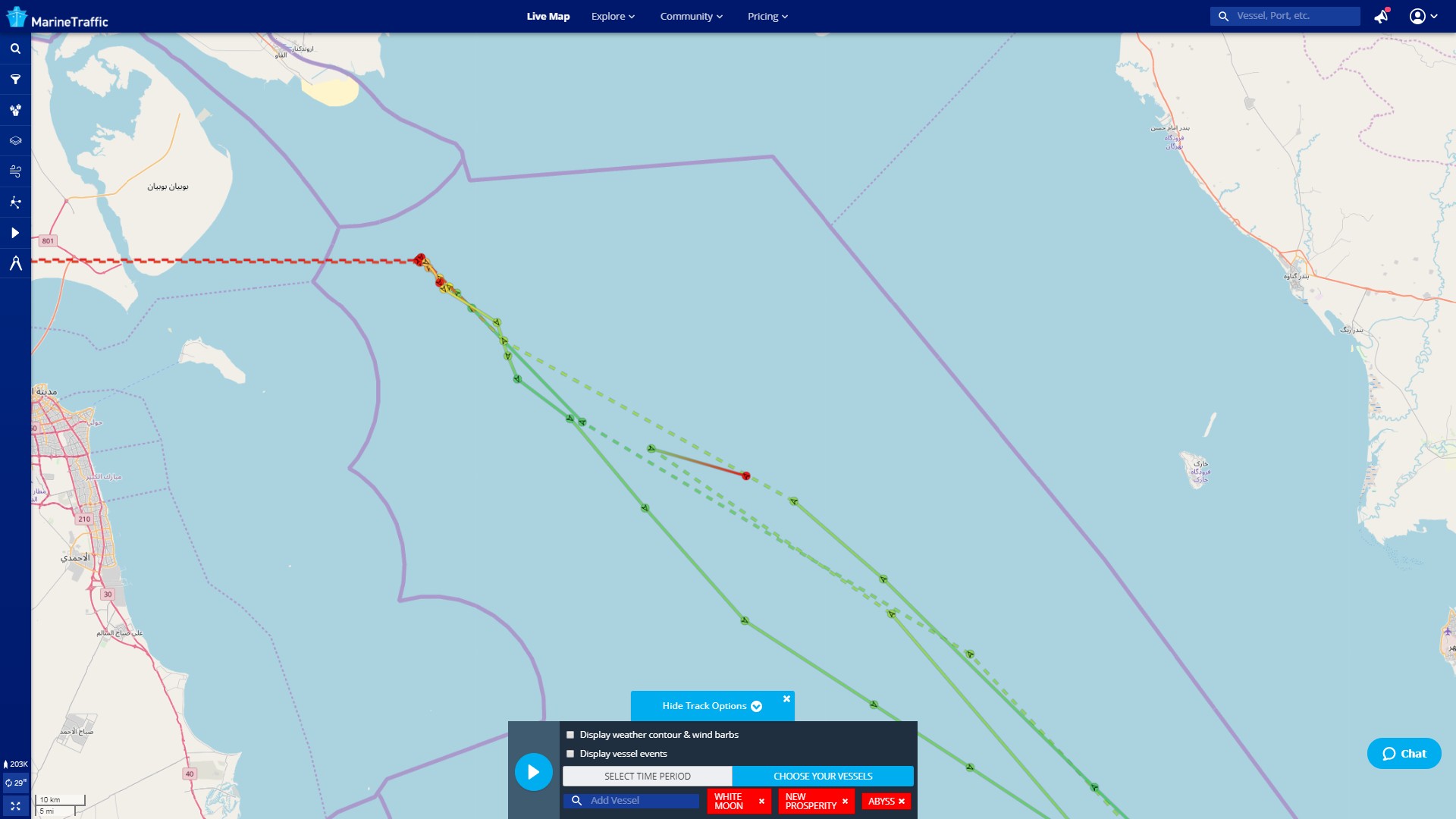 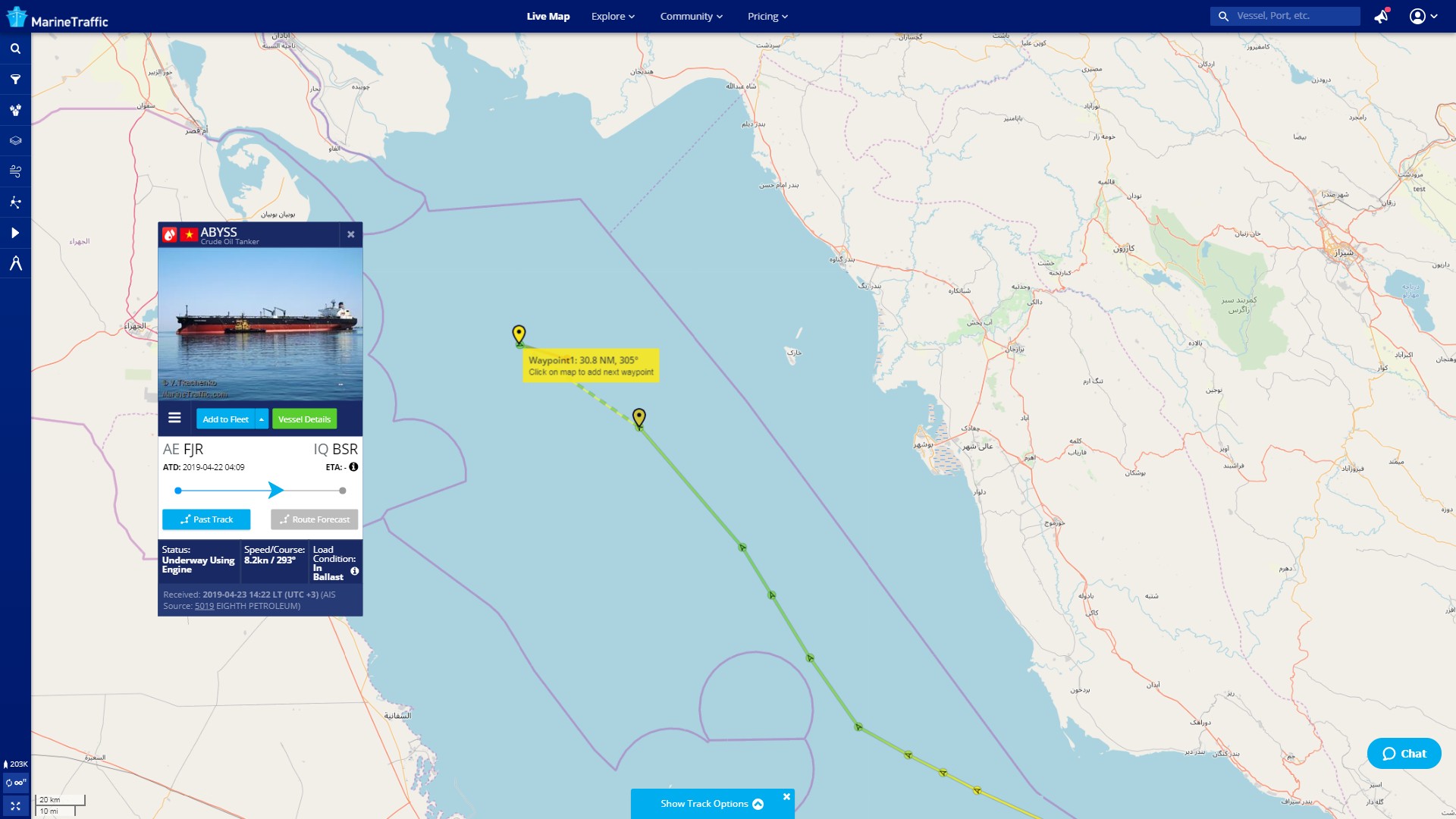 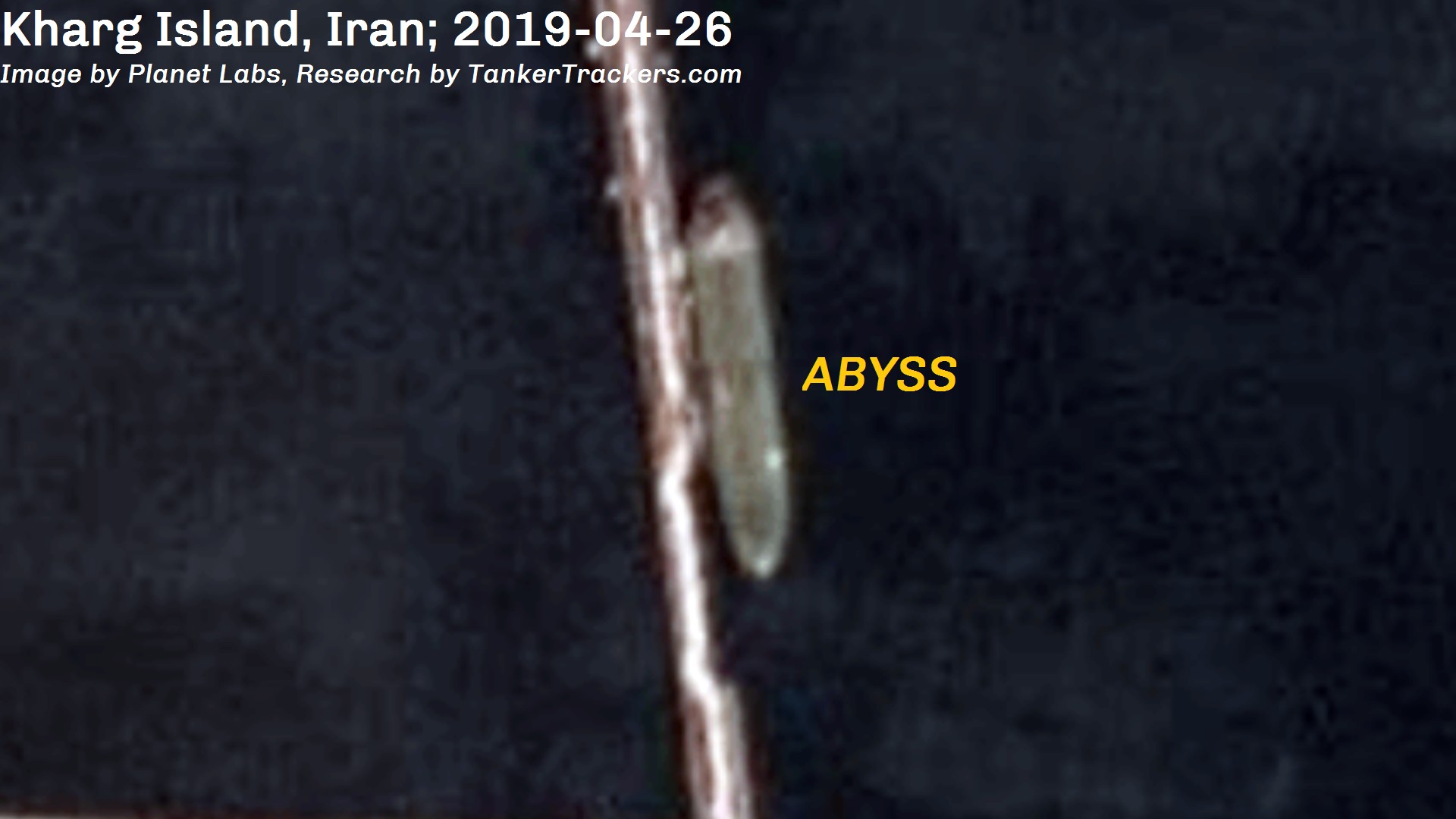 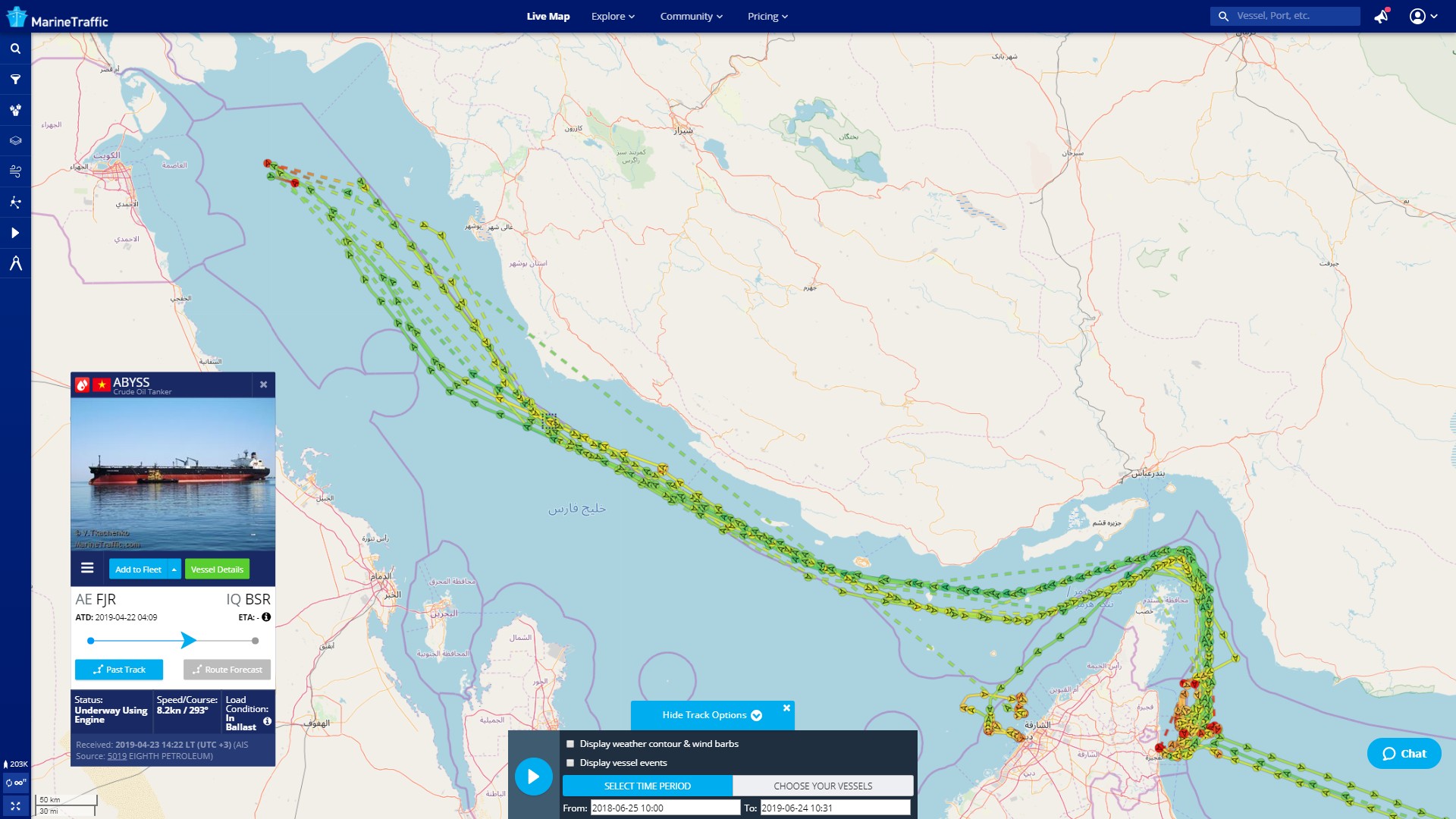 In conclusion, the oil which ENI rejected is from Iran. We missed this small export but have added it to our data. With that said, we see more smaller vessels exporting oil out of Iran now that the sanctions are in full effect without waivers. Some of them are as small as half a million barrels. It’s also good to mention that this transfer to Italy technically happened while waivers were in place as it departed during late April. However, given that Italy didn’t choose to continue importing during the waiver period, all they received was a wrong type of oil according to their own account.

2019-08-04: The WHITE MOON Suezmax tanker with Iranian oil had sailed all the way back to the Umm Qasr anchorage in Iraq via the Suez Canal and around the Arabian Peninsula to return the entire cargo back to NEW PROSPERITY. It will definitely be interesting to see what will happen with that oil next. Meanwhile, the WHITE MOON has sailed off to Ras Tanura, Saudi Arabia, to pick up oil from there. 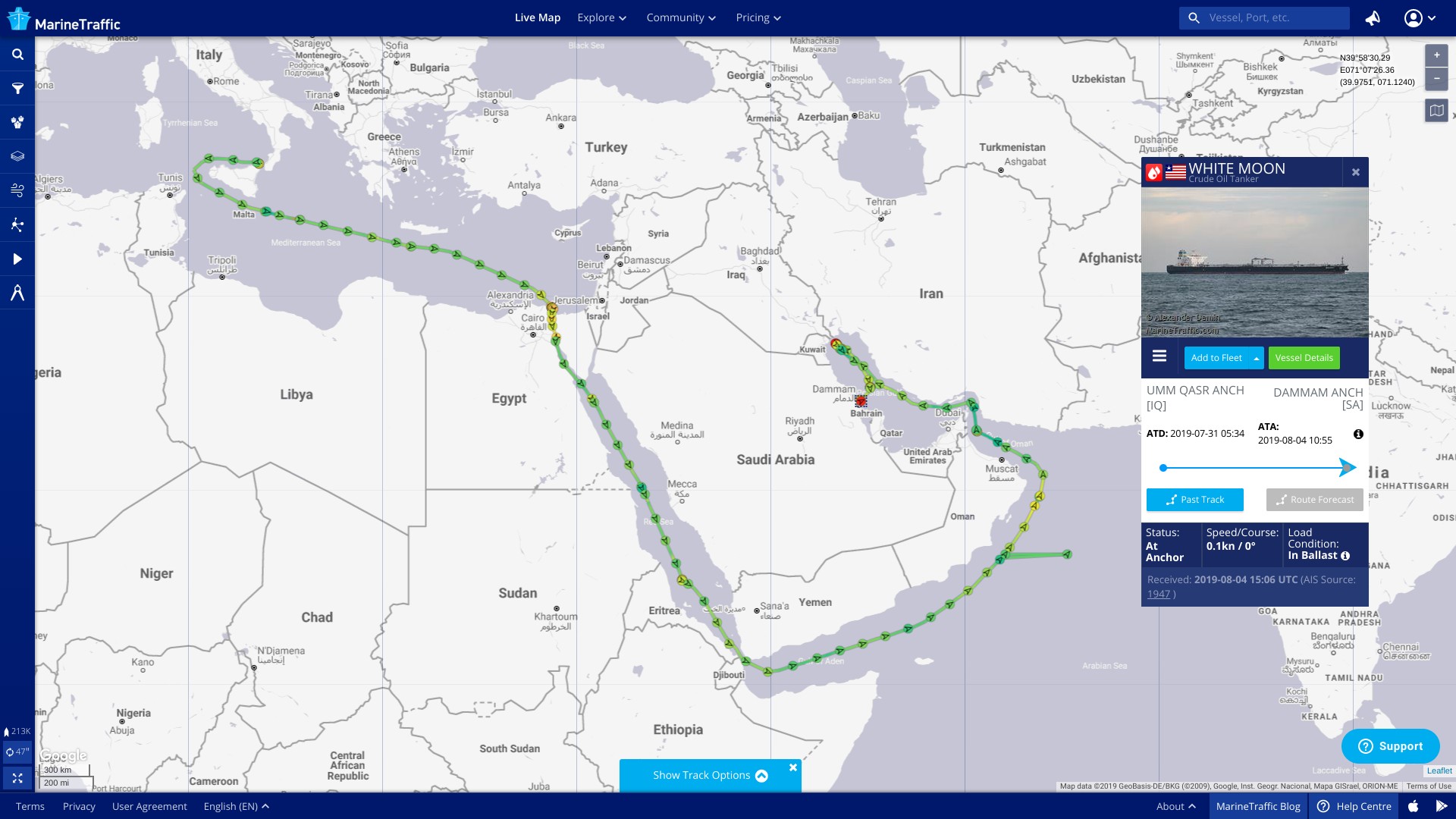 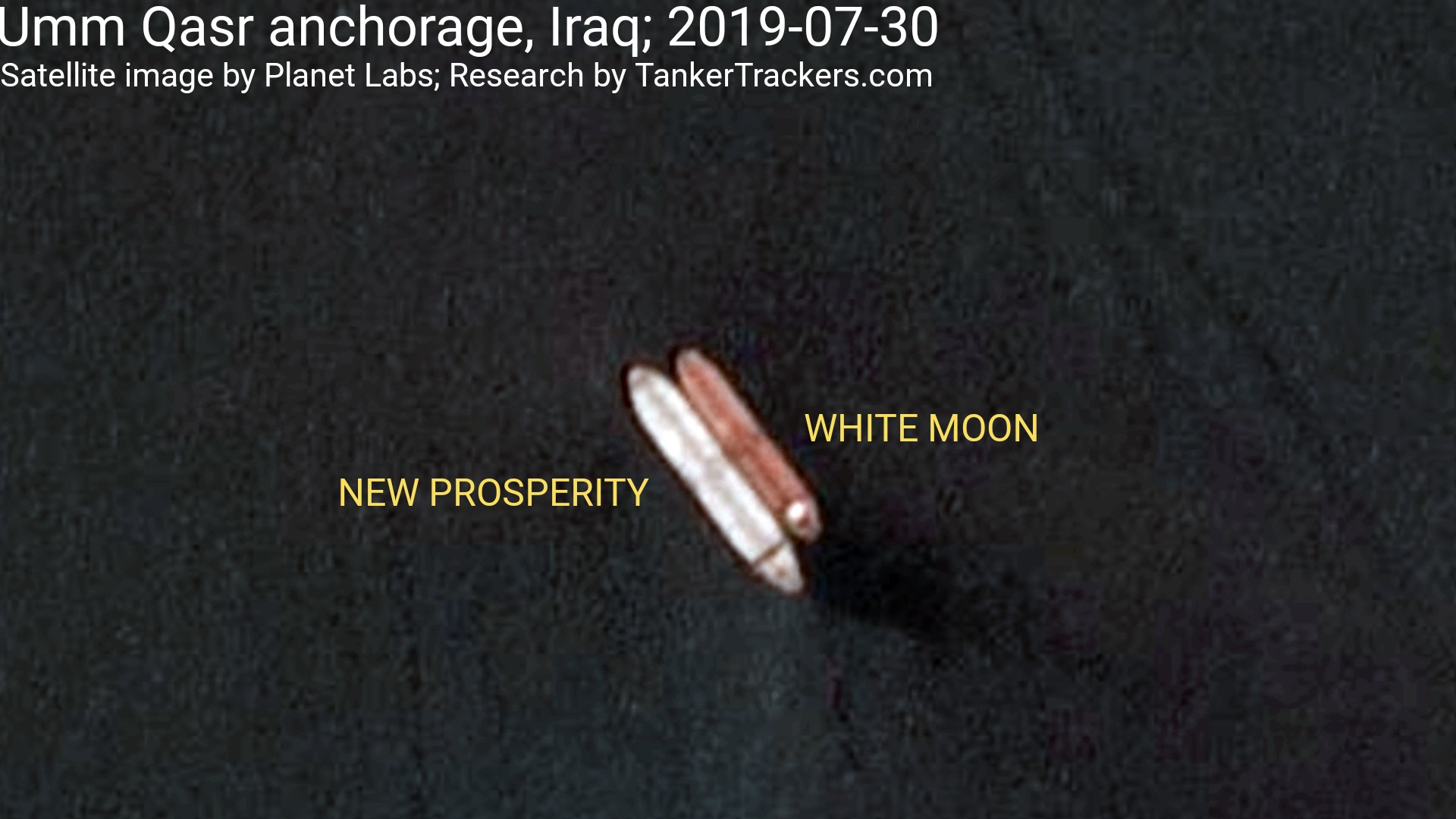