The Red Sea is now piling up fully laden VLCC supertankers, and they are floating idle in wait to deliver some or all of their oil to the SUMED (Suez-Mediterranean) pipeline network that begins in the Egyptian Red Sea port of Ain Sukhna and connects to Sidi Kerir just west of Alexandria along the Med Sea.

This MarineTraffic map is only showing idle vessels, not those in motion. 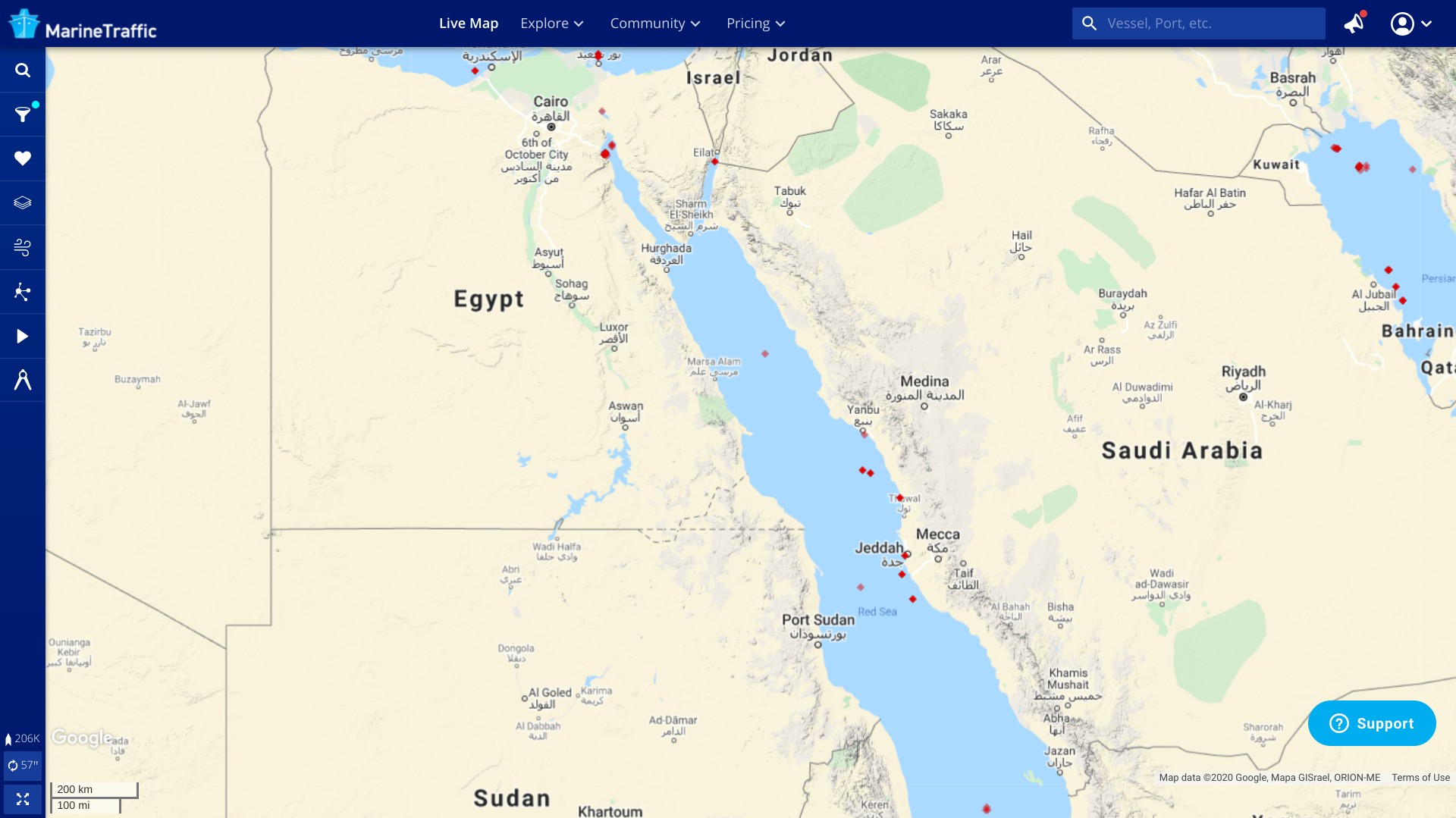 From what we can see, the bulk of the concentration is at the anchorage southeast of the SBM delivery points floating just off the coast of Ain Sukhna. There are four of them, and only three are good for VLCC’s while the 4th is good for a one-million-barrel-carrying Suezmax. In fact, one of them can even handle the rare ULCC (3-3.5 million barrel capacity!!). In any case, today there’s only ONE tanker at the SBM, and we can clearly see why. Storage is full on shore, as we have reported in our visual storage survey last Friday. SUMED South (as we call it) can capacitate some 18.5 million barrels of space, according to the website and our own height and width measurements. 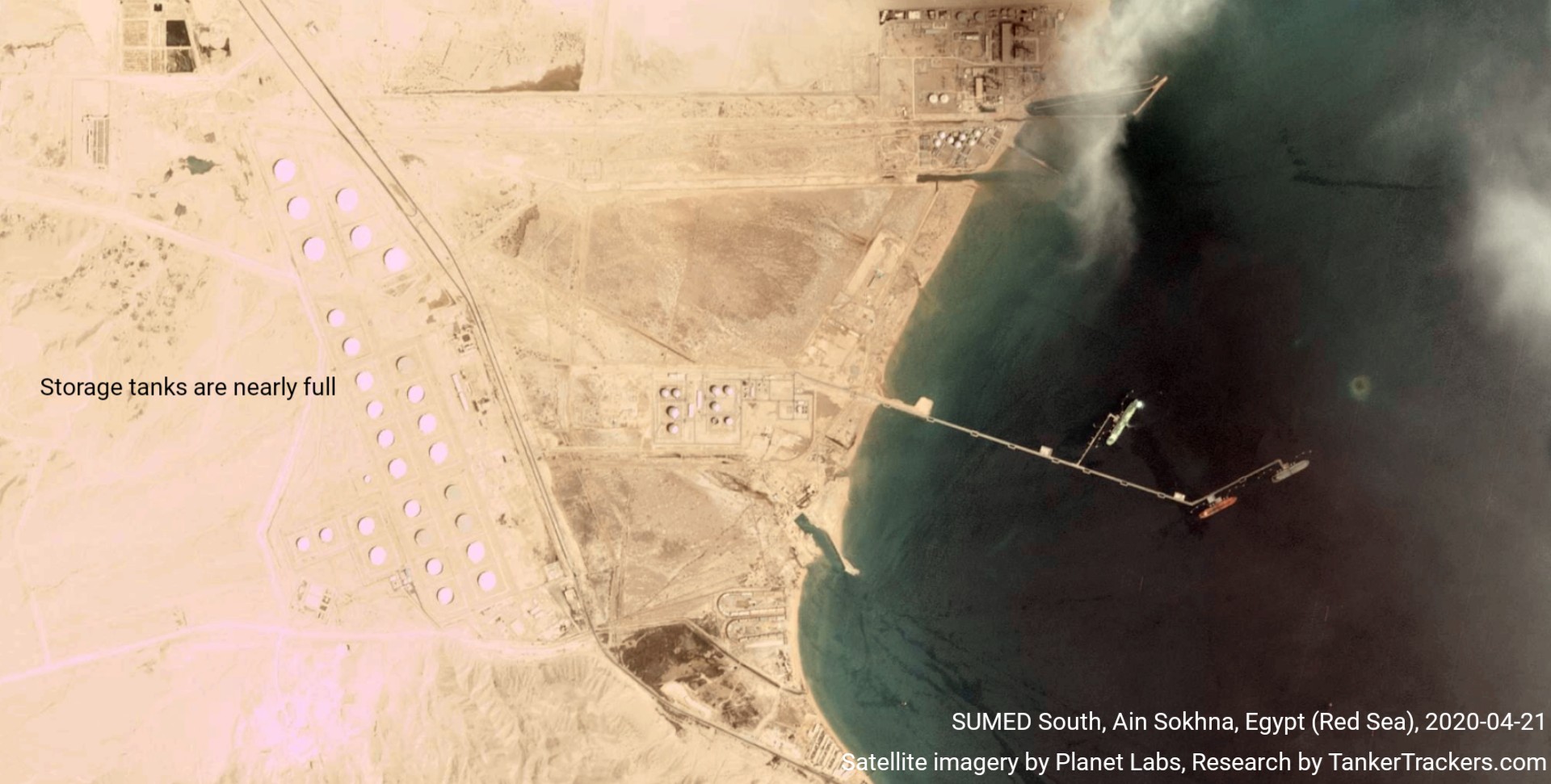 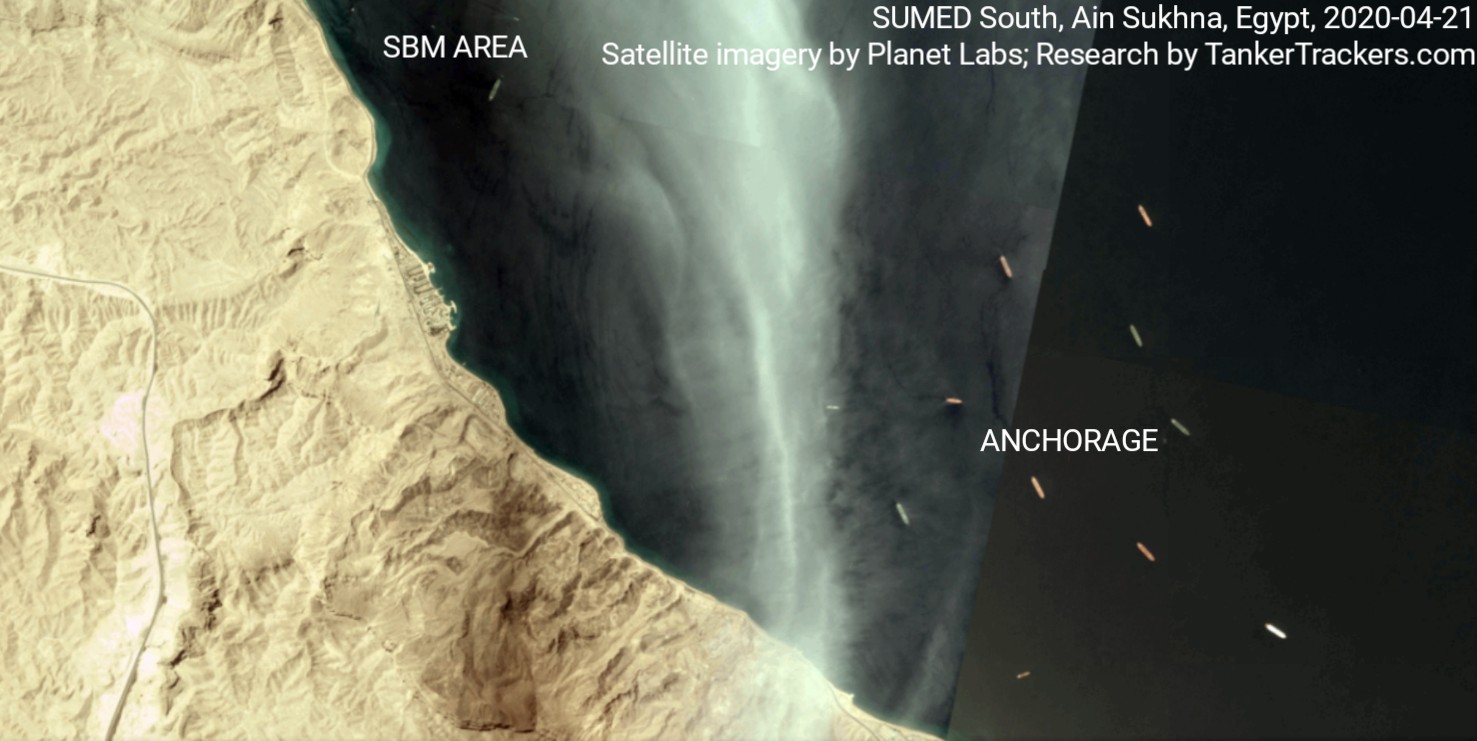 When a VLCC supertanker carrying 2 million barrels of oil needs to traverse the Suez Canal, it first needs to drop off half of its oil cargo to the SUMED, sail through the shallow canal and then pick up the oil on the other side in Sidi Kerir. Likewise applies when sailing in the other direction. Now, given that storage is nearly full on both ends, this complicates things because in Sidi Kerir the SBM’s are 6 SBM’s for different sizes of vessels, but the problem is that only one of them is currently in use, and it’s by a small Aframax tanker, which typically hold 600-700K barrels. The remaining vessels (also of similar size) are sitting in anchorage further out, waiting for their turn. 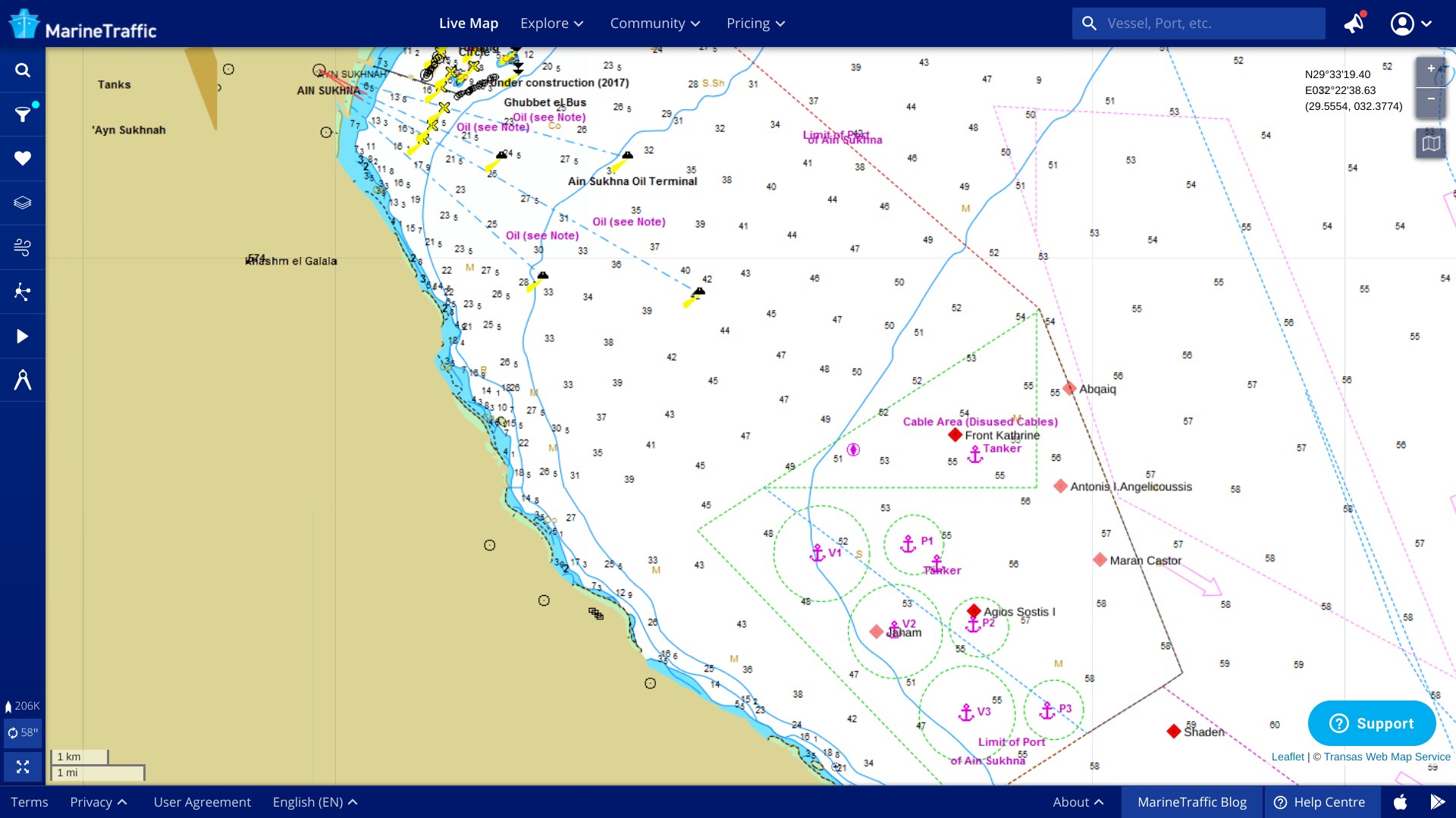 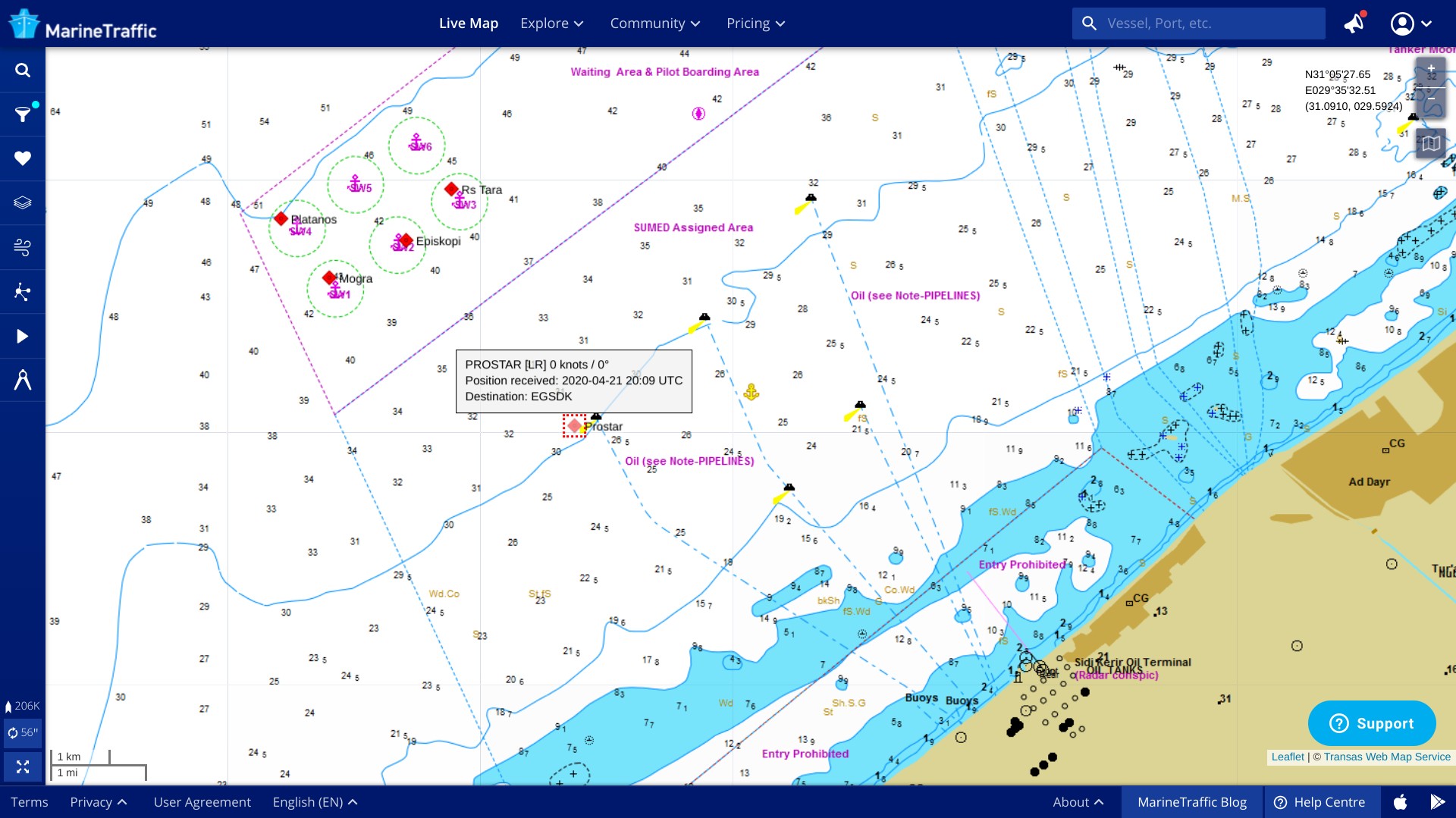 So, although Saudi Arabia is seen as exporting oil outside of its borders, their vessels are almost immediately halted in the Red Sea. Some of the oil originates from Saudi Arabia’s Red Sea terminal of Yanbu but a lot also came in from their east coast terminal of Ras Tanura. It seems that what’s really missing is the empty VLCC capacity in the Med Sea in order to help pick up more oil, but the only issue there is that Saudi Arabia will not want to spend too much money right now on expensive Suez Canal toll fees and is therefore shipping around Africa. They’re shuttling oil between Sidi Kerir and their storage in Rotterdam. The second reason is that their US clients are mostly concentrated in the Gulf of Mexico (Texas and Louisiana) and in California; which means that they will sail east from Saudi through the Strait of Singapore. Not much business in PADD 1 Atlantic Seaboard region.

Given that we tracked 1Mbpd in Saudi exports to the SUMED South during March and then 881Kbpd during the first 14 days of April, the anchorage in Ain Sokhna has only grown rather than absorbed the oil.

So, how long may this last? Probably up to a week from what we can tell. There’s an empty Saudi VLCC approaching Sidi Kerir from the west Med and is due to arrive on April 27th. The JALADI is coming in from ARAMCO’s storage in Rotterdam after a recent delivery run.

All in all, it seems like a delay. It means some importers or storage sites in the West won’t be flooded as soon as previously thought. 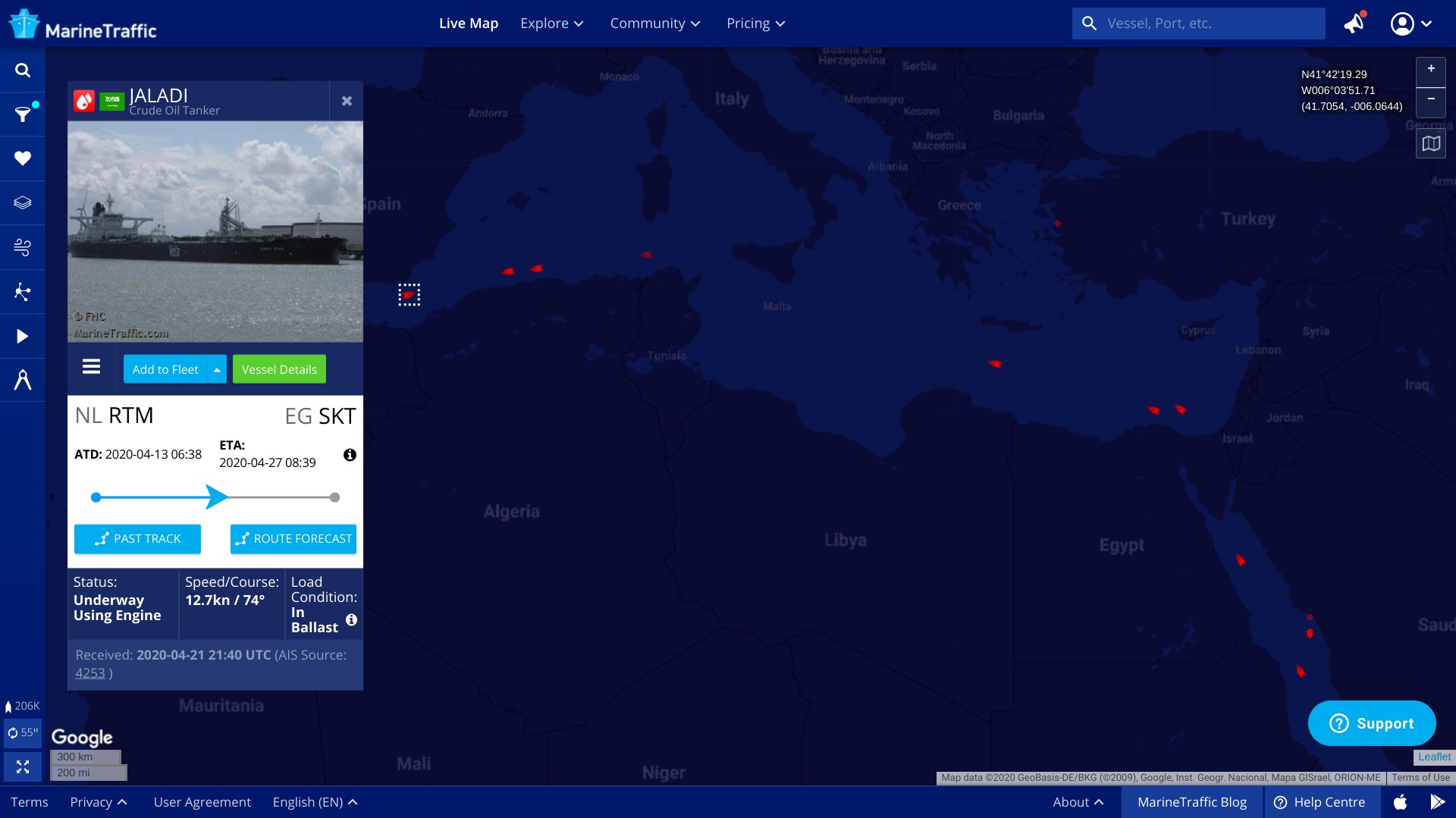 The situation in the Red Sea is getting uglier on a daily basis as more oil arrives at the scene but not delivered to the pipeline. Let’s take the AGIOS SOSTIS I as an example. This Malta-flagged VLCC departed Ras Tanura, Saudi Arabia on March 22nd and then reached Ain Sokhna on April 1st, which is a very quick trip, really. However, the vessels has been floating in anchorage for the past 3.5 weeks and only now today has she finally connected herself to the SBM delivery point closer to shore. 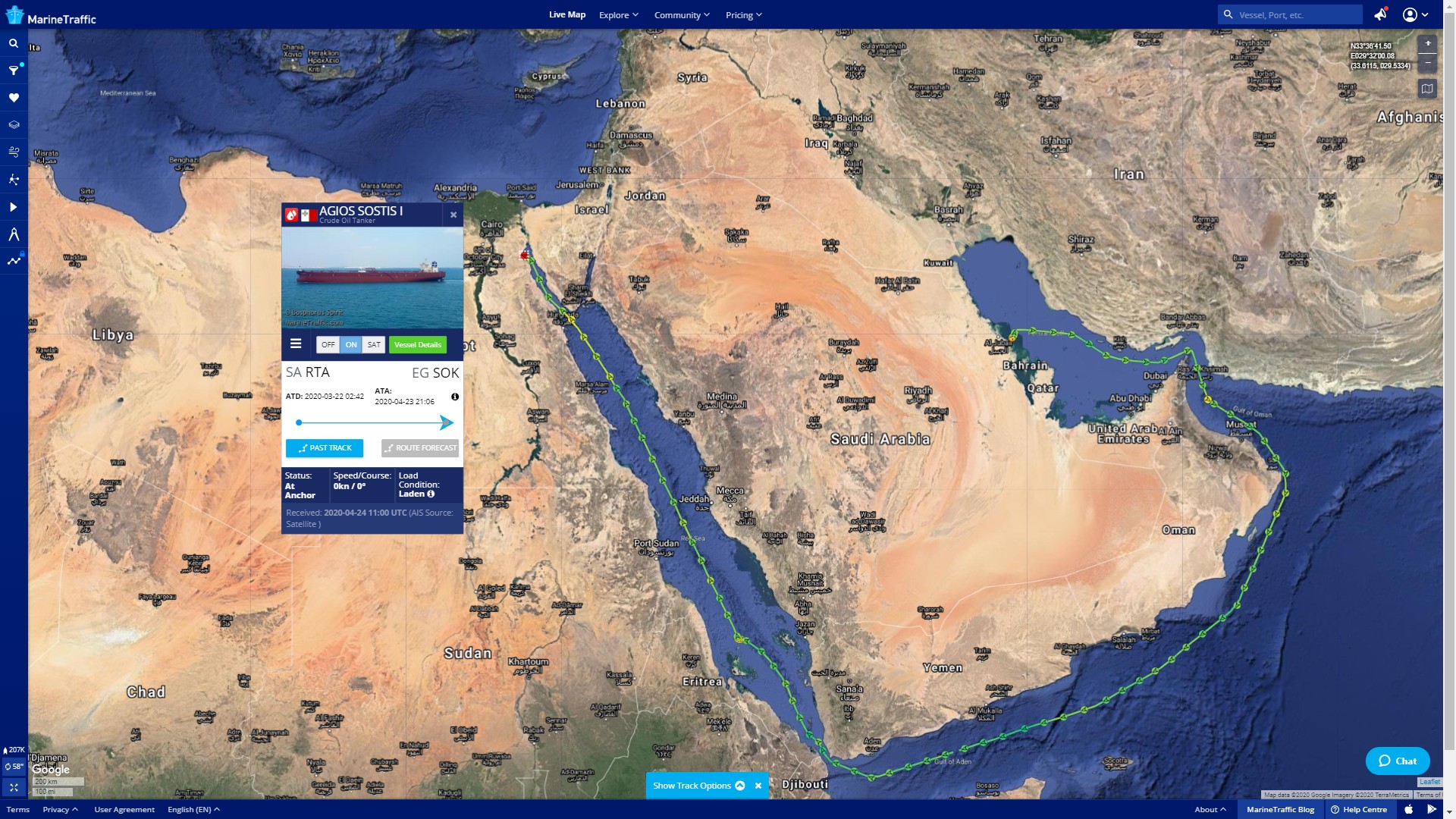 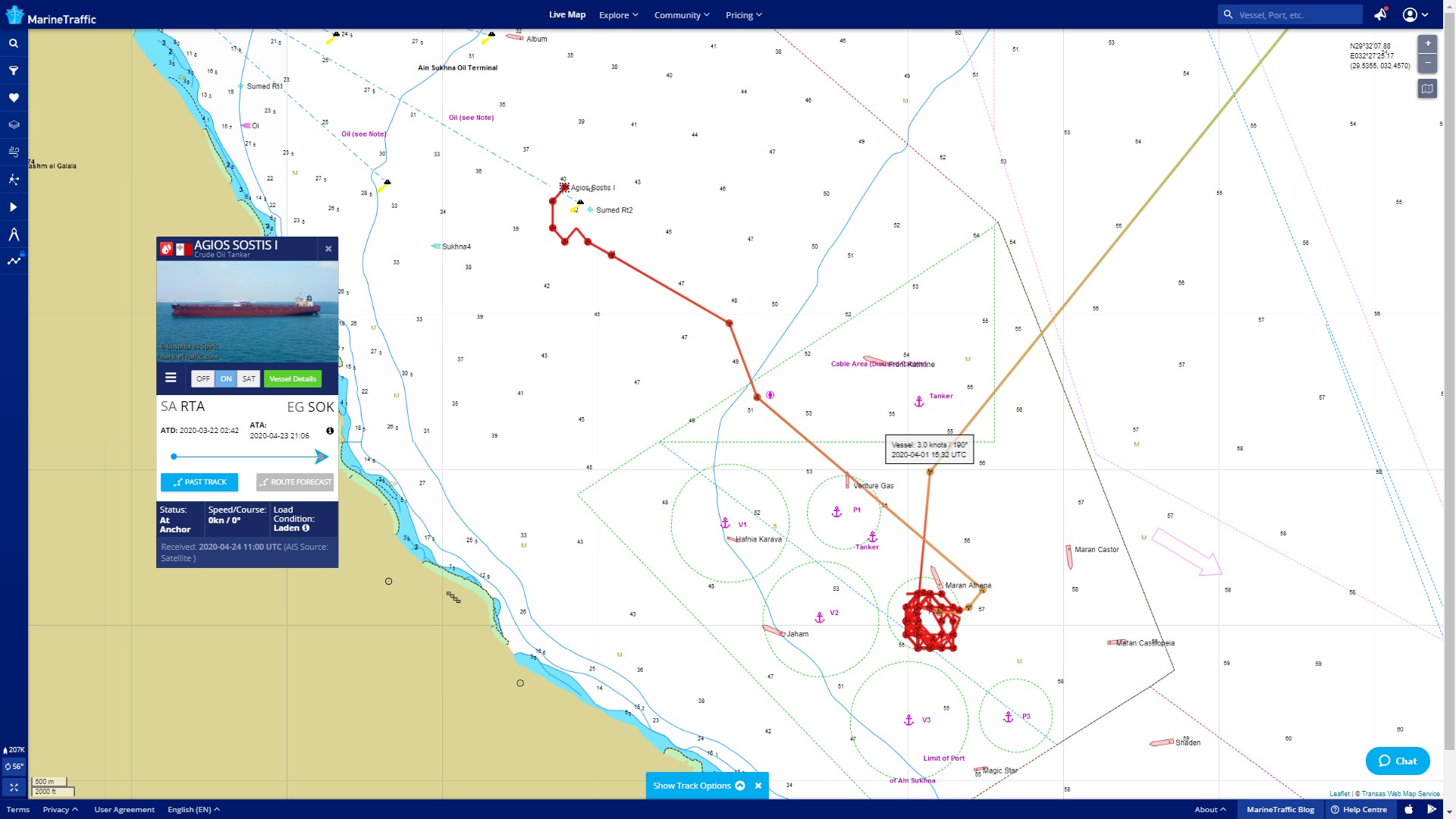 The total amount that’s floating right now in this anchorage (together with that SBM) is 21 MILLION BARRELS, of which 2 million is from Iraq, 3 million from Kuwait and another 16 million from Saudi Arabia. An absurd situation given that these 16 million are technically considered as Saudi exports. We have to do that in order to calculate production. Other metrics to factor are changes in storage and refining as well as direct use when generating electricity from the burning of crude oil.

When we checked the Med Sea side of the pipeline over at Side Kerir, we can see that there are NO VESSELS at the SBM’s! Here’s a map showing which empty tankers are headed empty towards Sidi Kerir for a pickup of oil. The only VLCC among them is the same JALADI we wrote about earlier. She’s due to arrive on April 27th, and will most likely take a day or two to load before departing back to Rotterdam, a storage site that is still only half full. 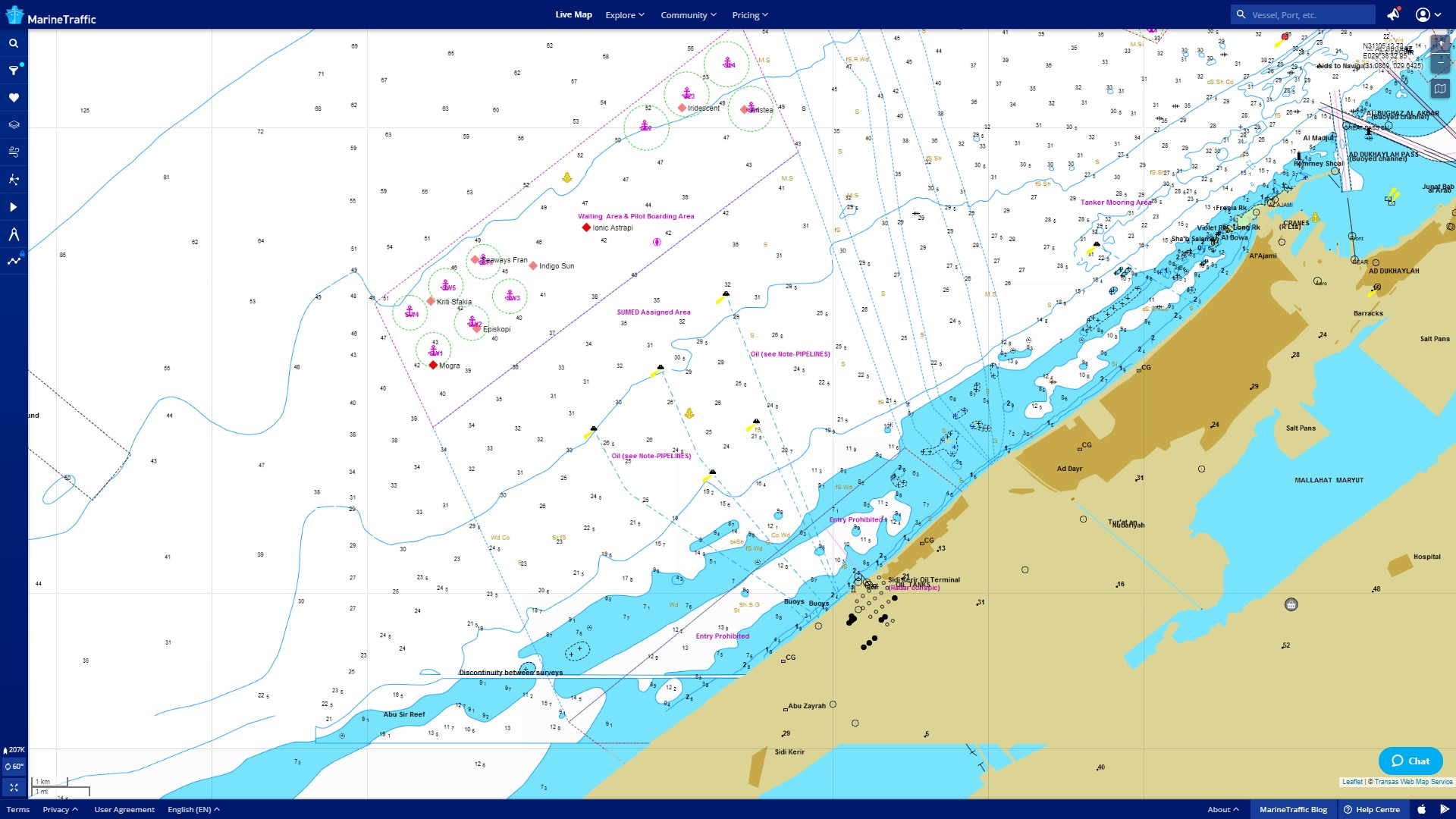 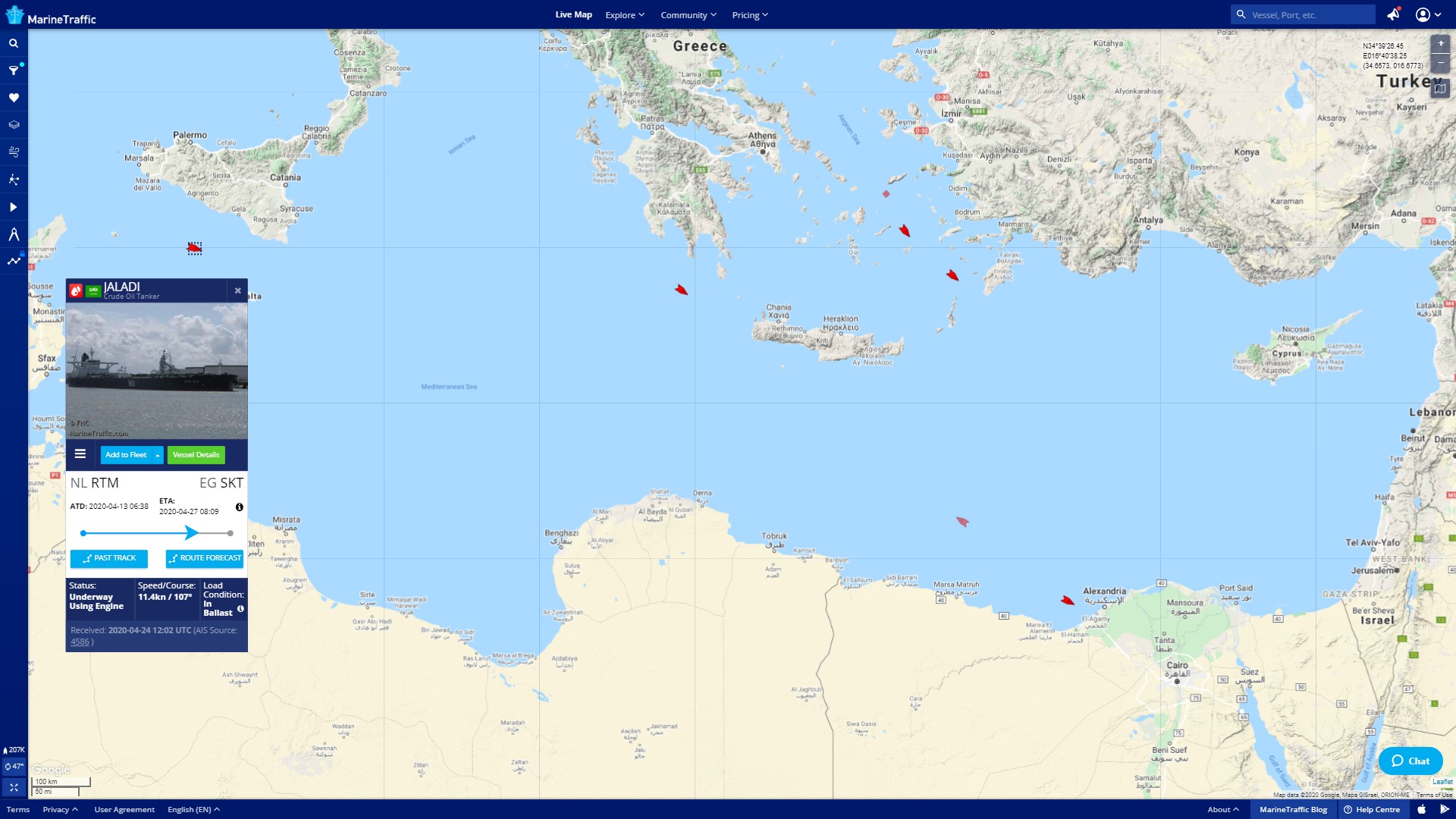 UPDATE 2020-05-09: We can now report that exports out of the SUMED’s Med Sea port of Sidi Kerir have resumed, although there were no exports between April 24th and 27th due to lack of lifting capacity. We have recorded 16 departures carrying a combined total 16.8 million barrels (rough estimate) over the period between April 27th and today, May 9th. Of these 16, four of them were VLCC’s, four are Suezmaxes and the rest are Aframaxes. 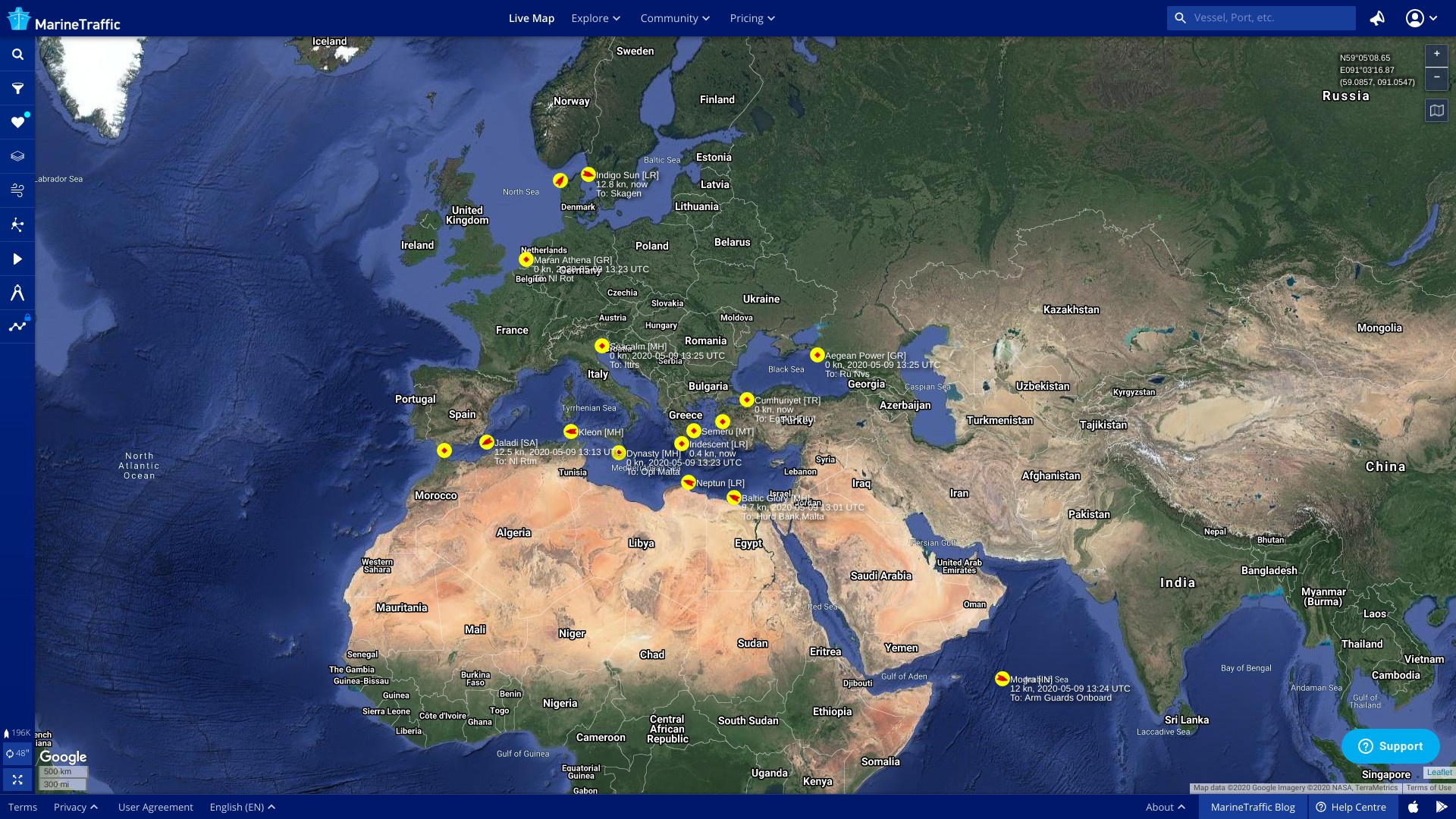 This amounts to 1,293,653 barrels per day, but we have historically seen rougly 1.6Mbpd in exports out of Sidi Kerir. The single largest destination is Rotterdam, Netherlands, with a combined total of 3.858 million barrels across two VLCC supertankers; one of them being the Saudi Bahri vessel, the JALADI, which we wrote about earlier. We also see a VLCC shipped off yesterday towards the US Gulf Coast, and her name is NEPTUN.

We can see that NEPTUN originally left Al-Muajjiz, Saudi Arabia with her 2.1 million barrels on May 2nd, delivered her cargo to the SUMED, traversed the Suez Canal and then picked up the cargo again. Given that there are still several idle VLCC’s on the Red Sea side of the SUMED that are waiting in line for delivery to the SBM, it tells us that this is a priority parcel towards USA ahead of driving season. 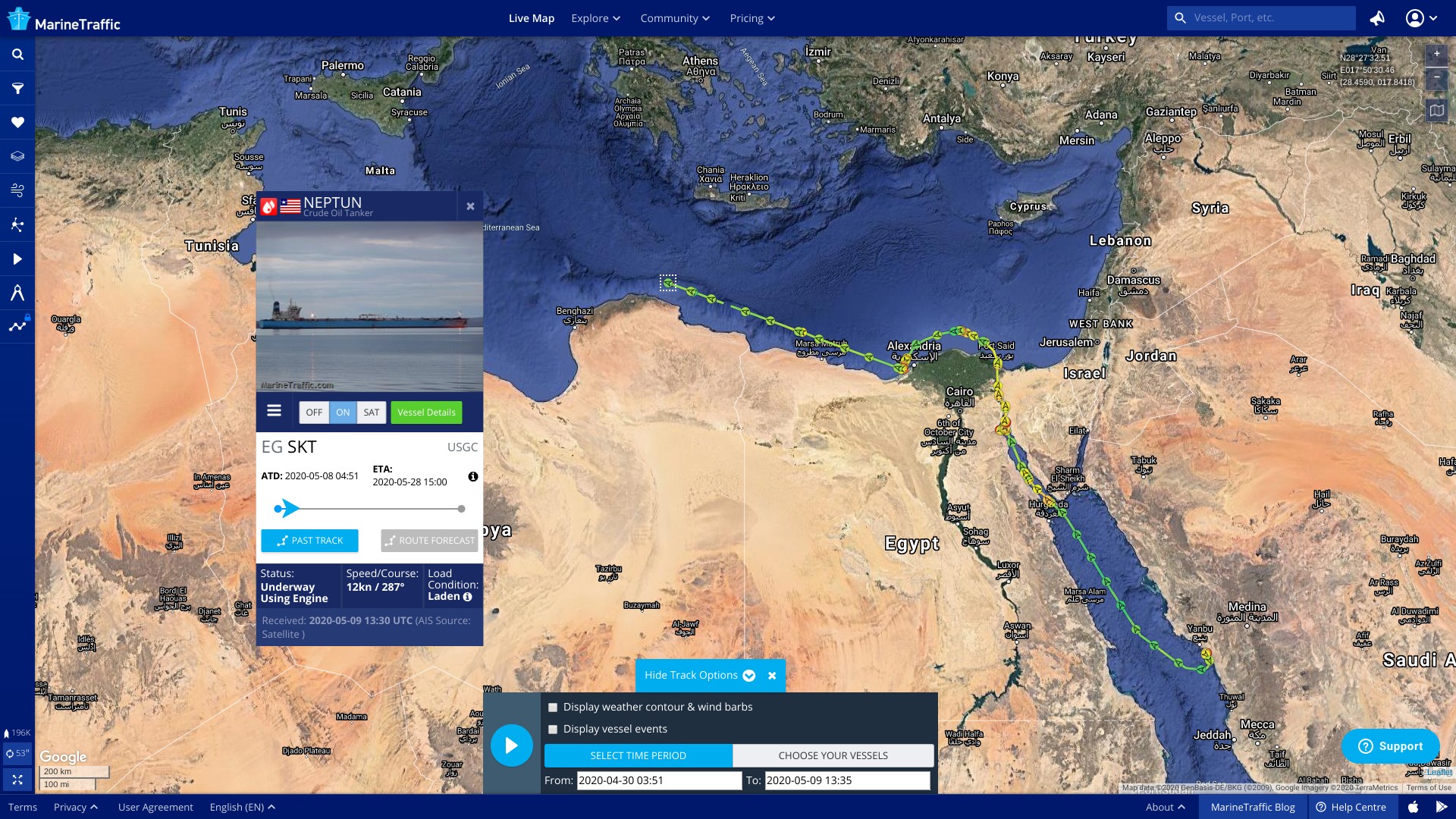 Planet Labs satellite photo of two tankers discharging oil at the SBM’s out in the anchorage of Ain Sukhna, Egypt (Red Sea) towards the SUMED storage & pipeline network. Image attained on 2020-05-06. 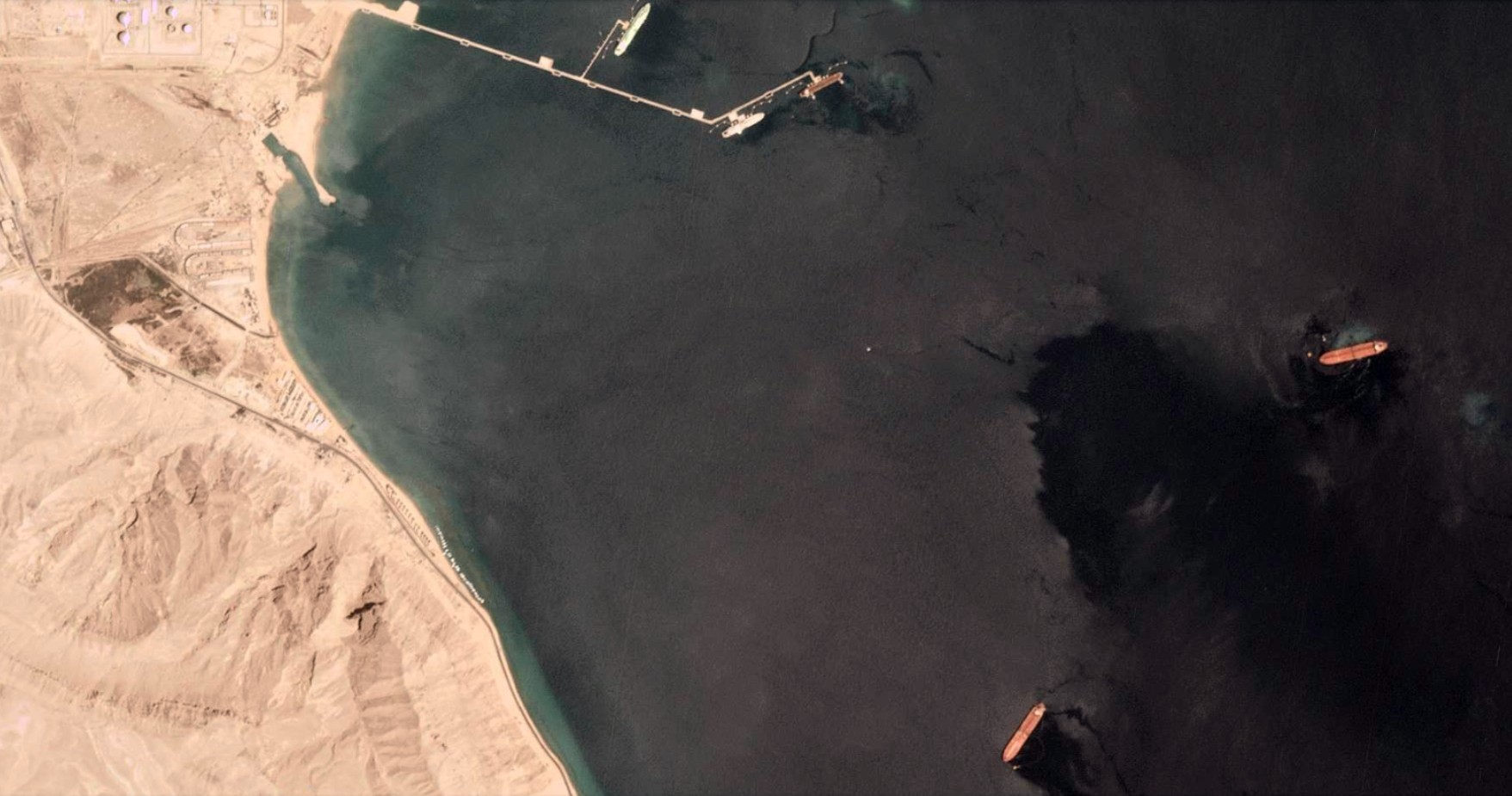 Planet Labs satellite photo of four VLCC’s, a Suezmax and an Aframax waiting for their turn to deliver at the SBM’s slightly west of frame in the anchorage of Ain Sukhna, Egypt (Red Sea). Image attained on 2020-05-07. 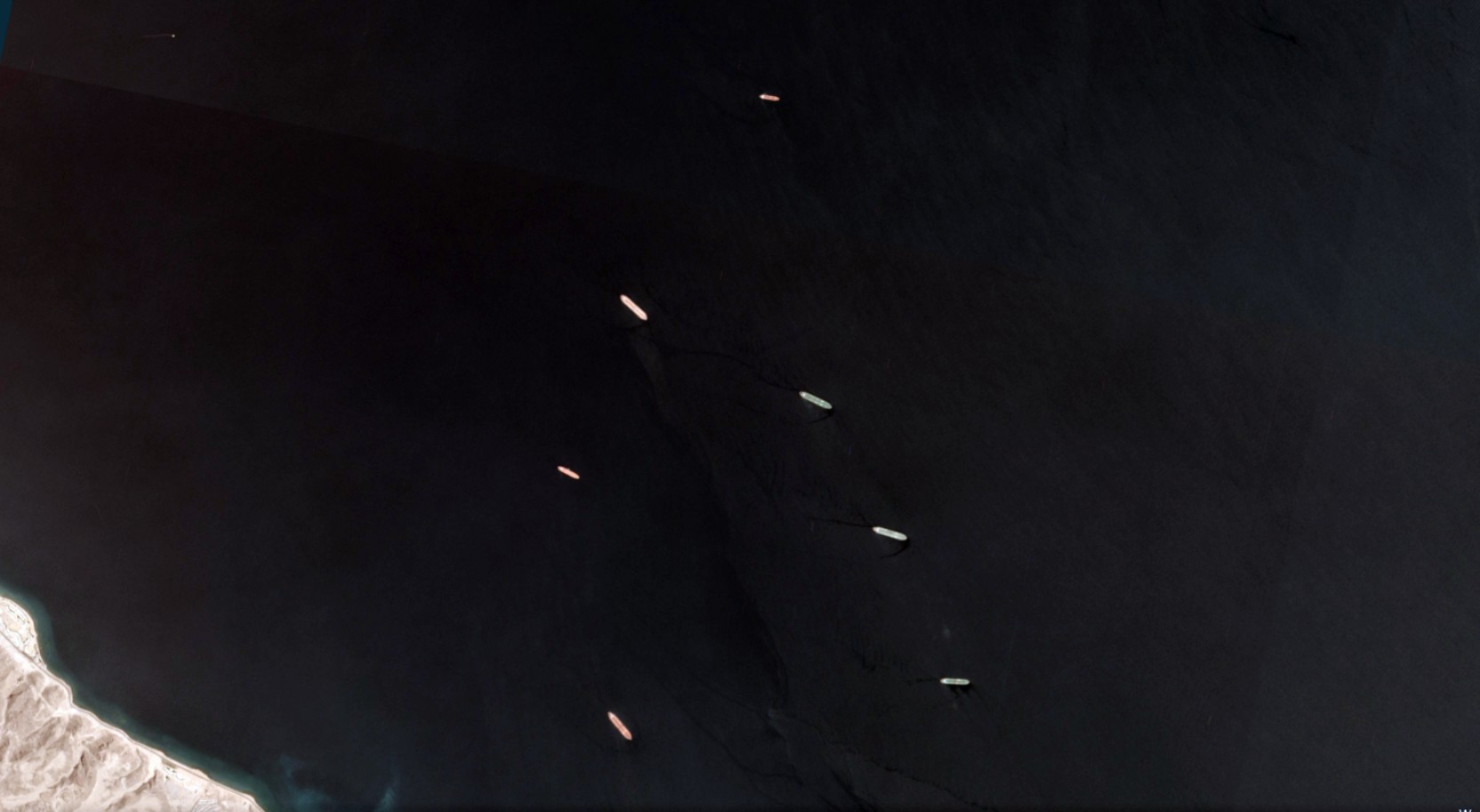 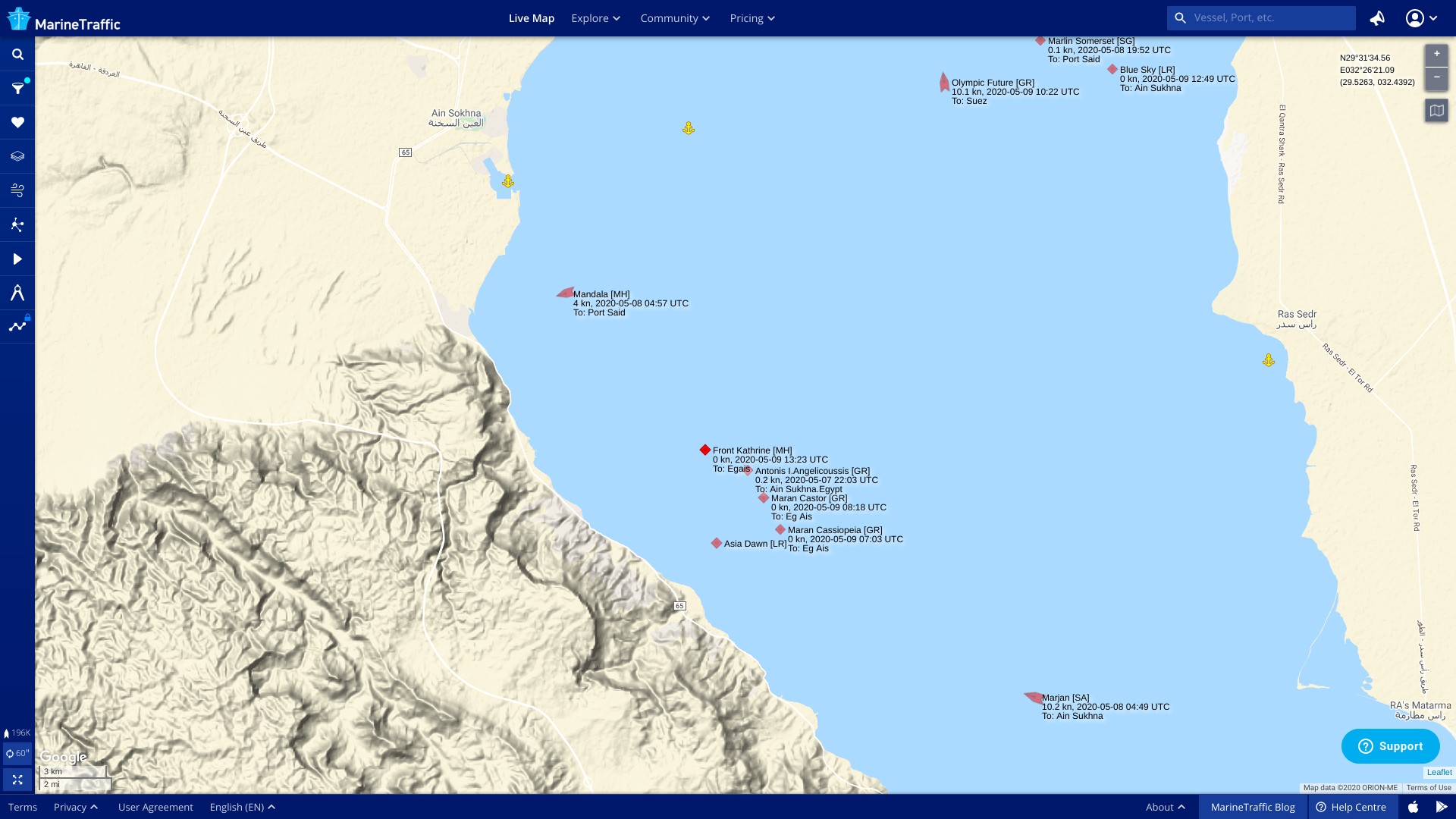 In conclusion, it seems that the snag is mostly over for now. We see priority markets being addressed again.