We have a theory on what is keeping the Adjustment factor tall and recurrent week after week in the EIA crude oil inventory reports.

First of all, a little explainer of what the Adjustment is. Put simply; it’s an accounting gap filler used to bridge the divide between the known and the unknown. For example; every Friday, the EIA receives a value for the amount of crude oil in US commercial storage. It is mandatory to submit this value to the EIA weekly. In addition to this, they have the unknowns - in this case, that would be imports, exports and refinery runs.

The production is based on a projected roadmap which the EIA itself lays out in their STEO (Short Term Energy Outlook), which is updated once a week, after the Weekly Petroleum Balance Report. The refinery runs arrive from the field with varying delay.

The imports and exports that we see each week come from US Border Customs filings. For exports, such filings are done in advance of a departure. As such, it can take several days before the vessels actually depart. For imports, the filings seem to vary depending on the importer. We have noticed that oil arriving from certain countries is filed well in advance of arrival, while imports from other countries are done once the vessel reaches the maritime border.

In addition, there is one more element in the calculation, and that is the US SPR, short for Strategic Petroleum Reserves. This is oil owned by the US taxpayer; managed by the federal government for the sake of national energy security. You can think of this as an oil reserve to be used in case of major emergencies, such as conflict or natural disasters.

When you think about it with all these factors in mind, the adjustment begins to look more like a reverse calculation, and that is how we treat it. The equation, in its simplest form, breaks down like this:

We were inspired to write this article based on a couple of recent observations we’ve made. We saw in our export tracking data that our barrel counts were always short of any sensible number when it came to US exports. For example; instead of a VLCC shipping off 2 million barrels, we were seeing numbers like 1.93 million. It was the same with the Suezmax tankers. They normally transport 1 million barrels, but we would see numbers in the range of 950,000 to 970,000 barrels. It didn’t make sense, given that we see much better rounding in the other countries that we track.

We decided to raise our values for the API gravity of the oil we’re tracking, and it definitely brought the VLCC’s to 2 million and Suezmaxes up to 1 million barrels respectively. The API gravity was 44, which makes it a fairly light oil. In fact, it is lighter than what is being pumped out of the ground in most places.

A crude oil’s API gravity can be made lighter by mixing it with various diluents, such as naphtha or gas condensates. Condensates have a much higher API gravity (50-70 degrees API) and are used for blending as well as refining into high octane gasoline and jet fuel.

We compiled 29 years of adjustment data by reverse-calculating as not all data inputs were available prior to 1991. After that, we stacked up all the barrels that have been thrown into adjustment each year and were astonished to see a cavern between 2002 and 2009. After that, it began rising at the same time US shale production began accelerating. 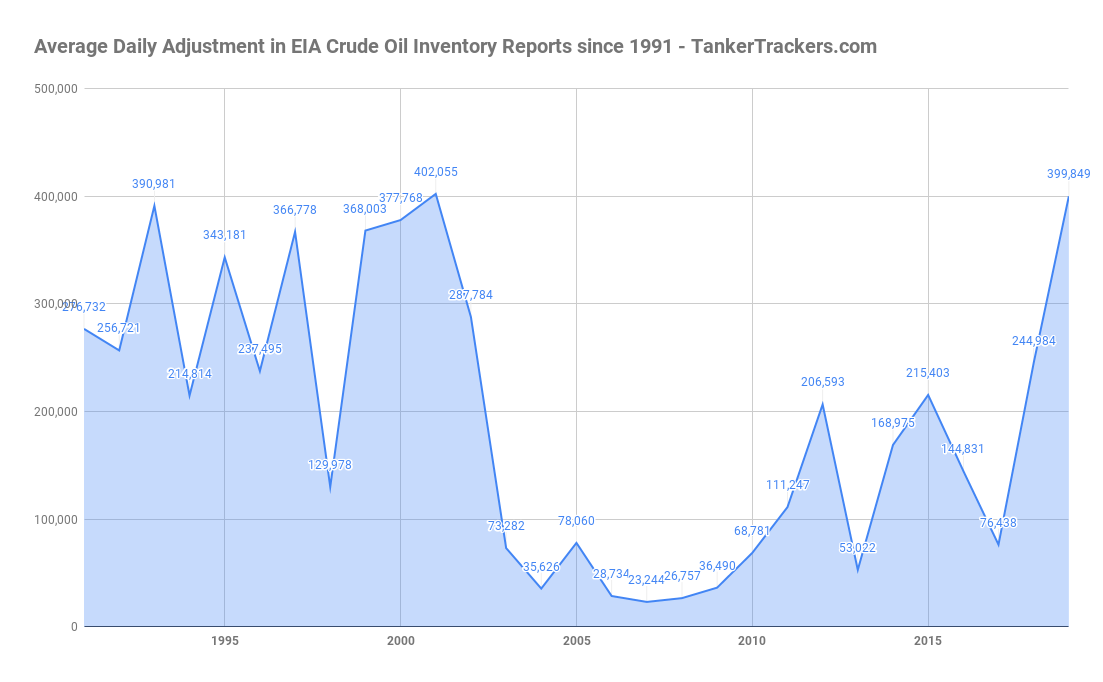 Compare this to EIA’s Daily Production of Tight (Shale) Oil: 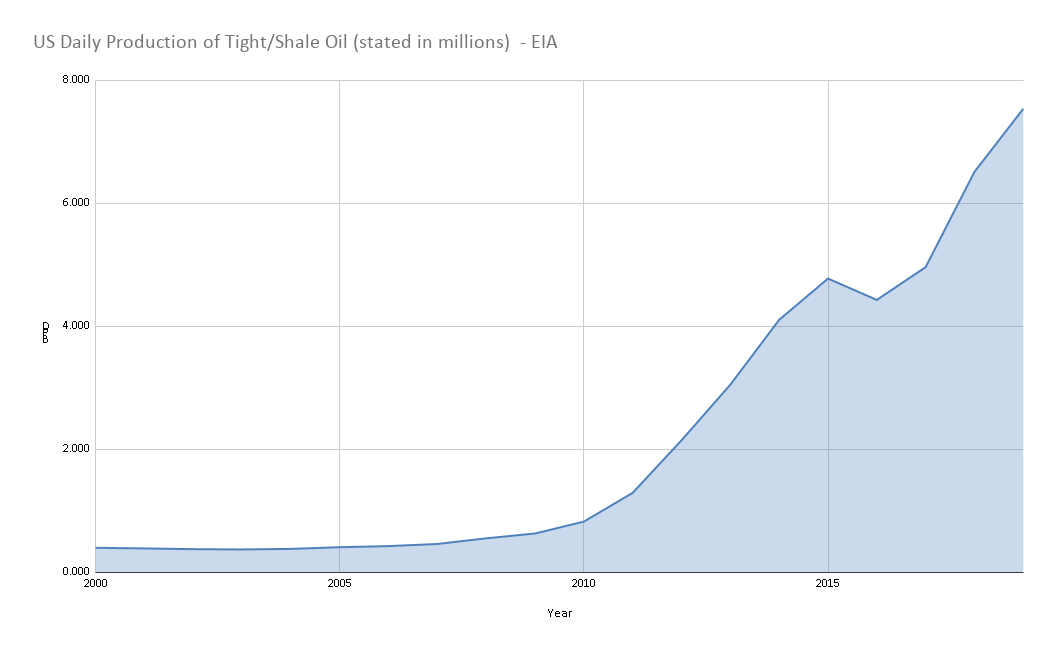 It is fairly obvious that the Adjustment barrel count began rapidly stacking up as of 2011 once hydraulic fracking (for shale oil and gas) picked up a great deal of momentum after government approval. By 2012, fracking accounted for a million jobs in the US.

We also see a couple of dips in the graph, and can find several reasons for this. There’s the possibly of field operators exporting gas condensates as a refined product, but also the possibility of the dip being a result of slowdown in US production due to OPEC’s decision to ramp up production. In general, however, the barrels continued stacking up alongside shale/tight oil, which lately accounts for two thirds of the total US production.

Prior to stabilization, gas condensates are referred to as “lease” or “field” condensate by the EIA. In 2014, the shale oil frackers in the Eagle Ford basin applied to export these excess gas condensates but weren’t initially allowed to do so. In fact, they weren’t allowed to do so until they first passed them through a stabilization/distillation tower to produce as what’s referred to as “plant condensate”. For the sake of mere technicality, that process made it a refined product rather than a natural crude oil byproduct. This was at a time when the 40 year long US crude oil export ban was nearing its end in 2015. Refined products were allowed to be shipped during the ban, but crude was considered a strategic commodity, given that the US was extremely dependent on imports.

The map below by DrillingInfo shows what the shale play looked like in 2014. You can see that the yellow and red shaded zones have a higher API, indicating gas condensates between 50-70 degrees API gravity.

Fast-forwarding to today; here’s what happened in 2019: Sanctions. The fact that the US stopped shipping heavy naphtha to Venezuela (for diluting their heavy crude) during the first quarter of the year meant that the US had to begin stockpiling gas condensates (an NGL; Natural Gas Liquid), most likely blended with crude oil. This oil would then be exported to places such as South Korea, as the country was previously purchasing gas condensates straight from Iran - which they had to stopped doing due to sanctions being put on that country. Instead, they began nearly doubling their imports of this much lighter crude oil from the US Gulf Coast. Last year, the United States exported 242,000 bpd to South Korea. Compare that to the 418,000 bpd we’ve seen this year up until the end of August, according to EIA data.

As for forecasting EIA, our methodology will continue to be based on the 4 week moving average. We do not guess our way through individual weeks without basing them on the past 3 weeks. The same goes for exports. If we have been able to track 100 million barrels departing the US over a 4 week period but EIA has only shown 80 million for the past 3 weeks, then we are calculating that they will post 20 million barrels in exports for the week.