On September 18th, 2019, Colonel Turki Al-Malki of the Saudi-led coalition presented his evidence of what was hit before the crack of dawn on September 14th. He also pointed out what weapons were used. However, he pointed out something that caught our attention, and that is the direction of the attacks on the Khurais Mega Project, located 140-150km east of Riyadh. You can see an archive image of it here.

In the original tweet published by the Saudi Press Agency, they attached four images, and the final image shows a slide from the presentation at the ARAMCO Press Conference at which the colonel presented. If you look at compass they have added on the bottom-right part of the image (which we circled in red), you will see that it is pointing downwards, indicating that as north. 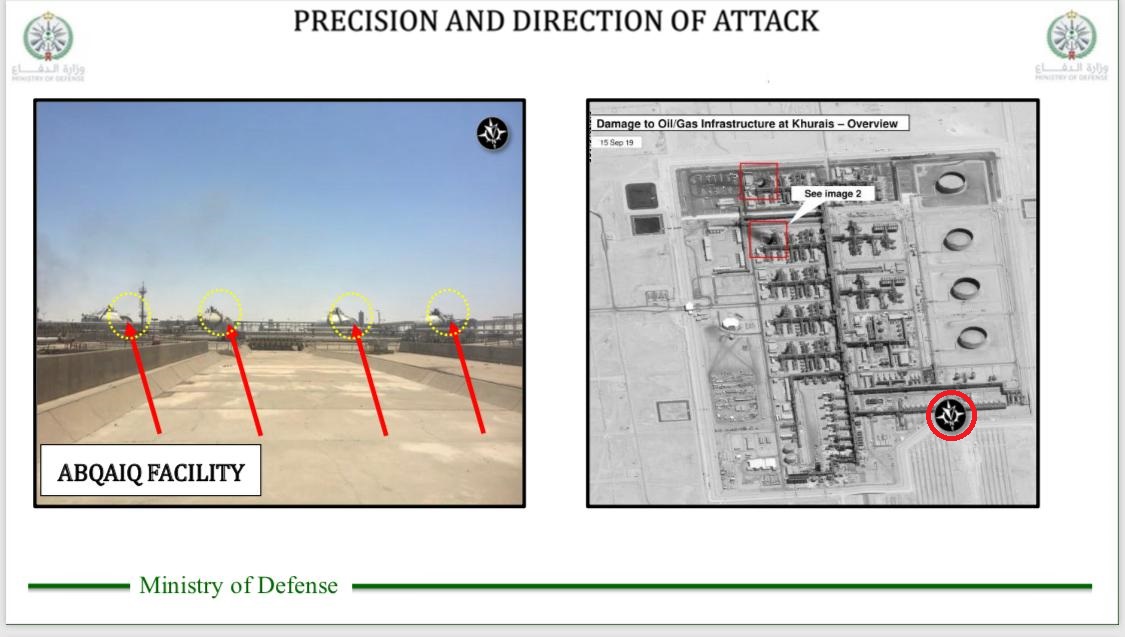 However, if you examine the original images captured by Digital Globe (now Maxar), they show that north is facing leftwards in that same photo. 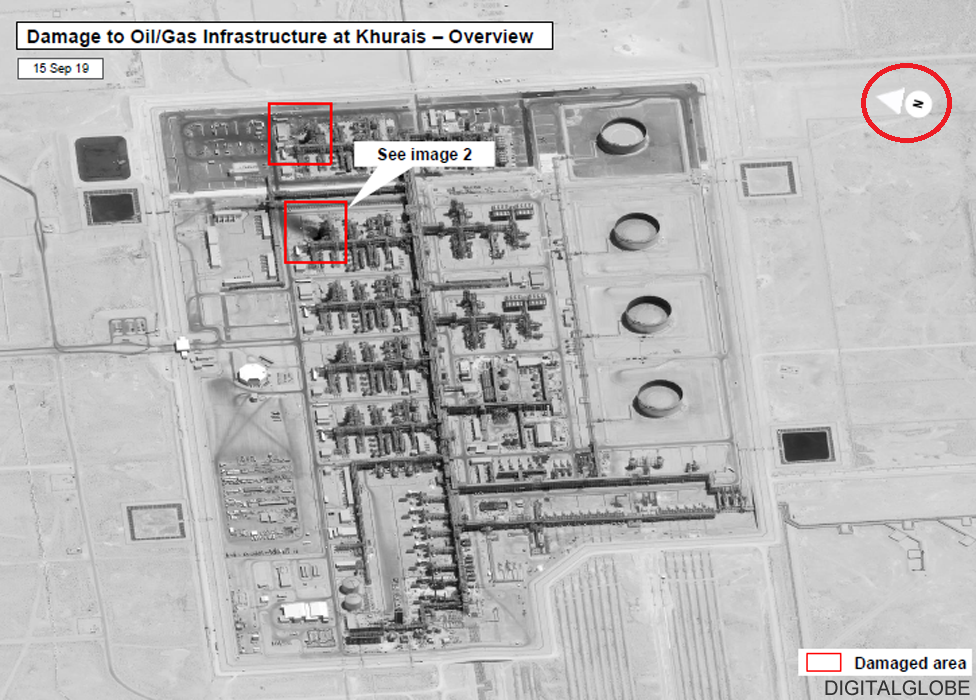 Colonel Al-Malki reiterated multiple times throughout his conference (and also when answering journalists) that both attacks (Abqaiq and Khurais) came from the north. In these two videos (one without translator) and other (with translator plus visuals) Colonel Al-Malki stated that (word-by-word without any grammatical corrections):

“If we look to Abqaiq also and looking to the distance using the multiple use of weapons UAV’s (Deltawing and also the cruise missile) you can see the capability will not be launched from Yemen for the cruise missile and also outside of the coverage of the UAV which has cannot be launched from that area not controlled by the Houthi militia. As for Khurais as we briefed, four cruise missile was attacking. You can see the 700km which indicate and prove that the attack is coming from the north to the south and in the same line and the same time which is the alignment of the three short-landed cruise missile. **One of the evidence the direction of the attack is coming from the north, this is an example of the Abqaiq facility (points_to_map), it’s aligned from the north and it shows using advanced capability and also good study for the target when it comes from the direction of the attack and it’s not coming from the south. And in the same thing it’s if we are comparing to to the attack have happen to Khurais.”**

Here are three sets of satellite images captured by Planet Labs, dated September 10th, 14th and pixel comparison of both. You can see the scorched surface is facing north-by-northeast, indicating that the attacks on Khurais came from the south-by-southwest, just as in the case of Abqaiq where the scorched surface was indicating that the attacks came from the west-by-northwest.