Iran Is Stepping Up Its Game

There’s been quite a bit of discrepancy lately between our data and that of other trackers when it comes to Iranian crude oil exports. Frankly, we’re surprised to see it because we haven’t changed anything in our routines as we track each vessel manually and confirm questionable shipments visually thanks to Planet Labs daily satellite imagery. Automated tracking can easily be fooled, and if you have followed our work over the past year, you will see that this is a recurring issue. Vessel crews switch off the AIS (Automatic Identification System) transponder when approaching destinations they don’t want in their logs. One of those destinations is Israel. The other is their neighbor, Syria. Syria’s sole supplier of crude oil is Iran due to a credit line they have with Tehran since 2013. As for Israel, they mostly receive their oil from Russia, the KRG (Kurdistan Regional Government of northern Iraq), Azerbaijan along with Angola as of recent.

So, why the discrepancy, you wonder? Well, the answer is simple. The vessels are now being instructed to switch off their AIS transponder before picking up the crude oil in Iran. This means that automated tracking systems are easily fooled because they’re expecting vessels to arrive at port, anchorage or StS (Ship-to-Ship transfer) designated zones. We’re not as we cast a larger net.

Here’s the latest example of a clandestine door-to-door transfer within August; the RISE DIGNITY. As she is a vessel we keep close track of, we knew she was going back to Iran after her latest shuttle run to Syria back in June. At that time, the only thing she did was to switch off her AIS transponder upon approach to Syria, but not while in Iran. In early August however, she switched off her transponder upon approaching Iran to pick up ~900,000 (899,967 by our maths) barrels of crude oil. That means her pickup was kept off the books.

In the map below, you can see that they actually switched off their AIS in the Strait of Hormuz on August 3rd, 2018. They had to keep it on up until then because UAE’s coastline is packed with hundreds of tankers and safety cannot be neglected as a result. After that, the vessel was dark until four days later, on August 7th. She reappeared heading back towards the Strait of Hormuz from Kharg Island. 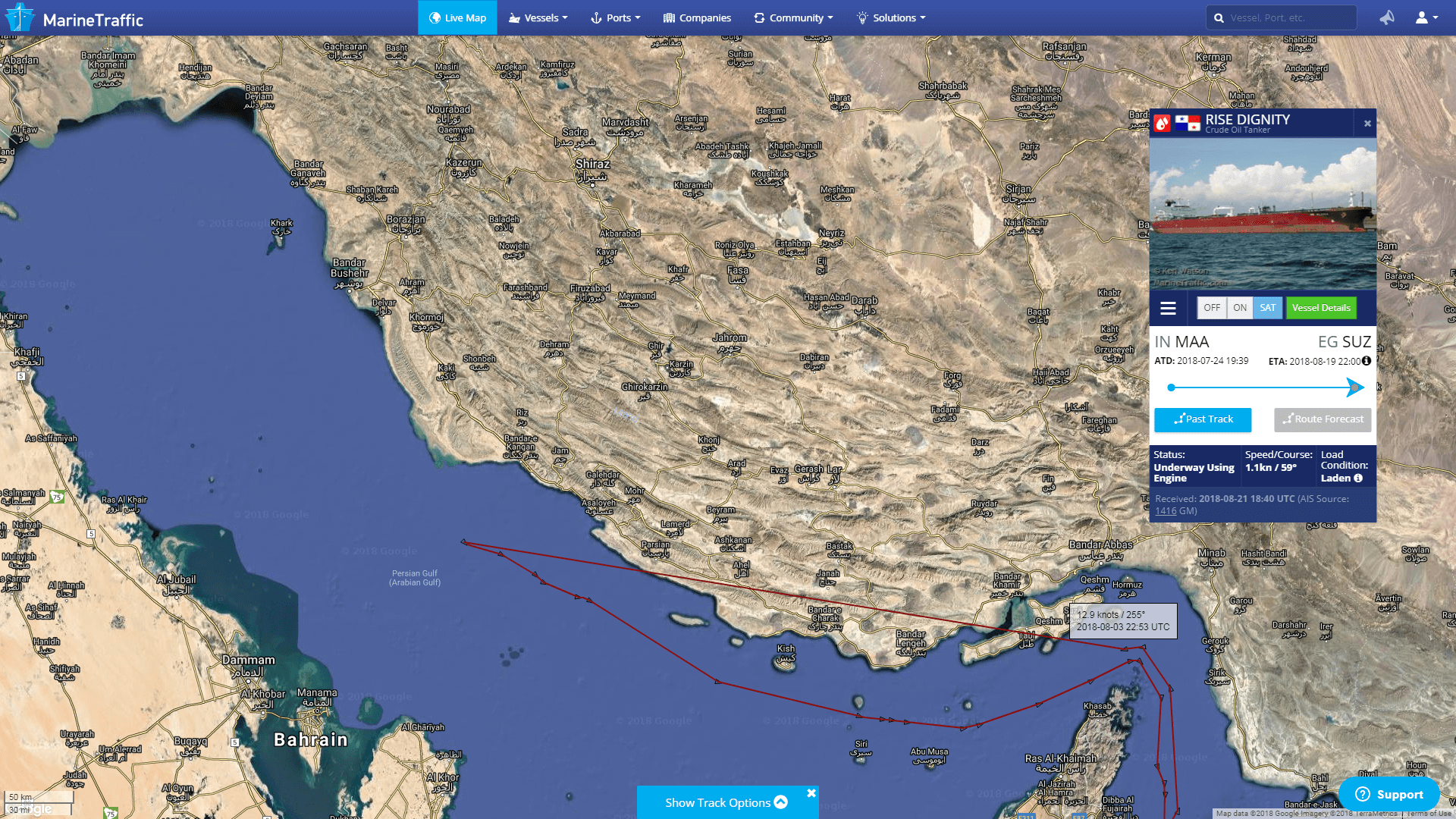 If we go back a day, to August 6th, we located the 274 meter long Suezmax tanker on the east jetty at Kharg Island. She has a green deck and a white crane on her port (left) side. 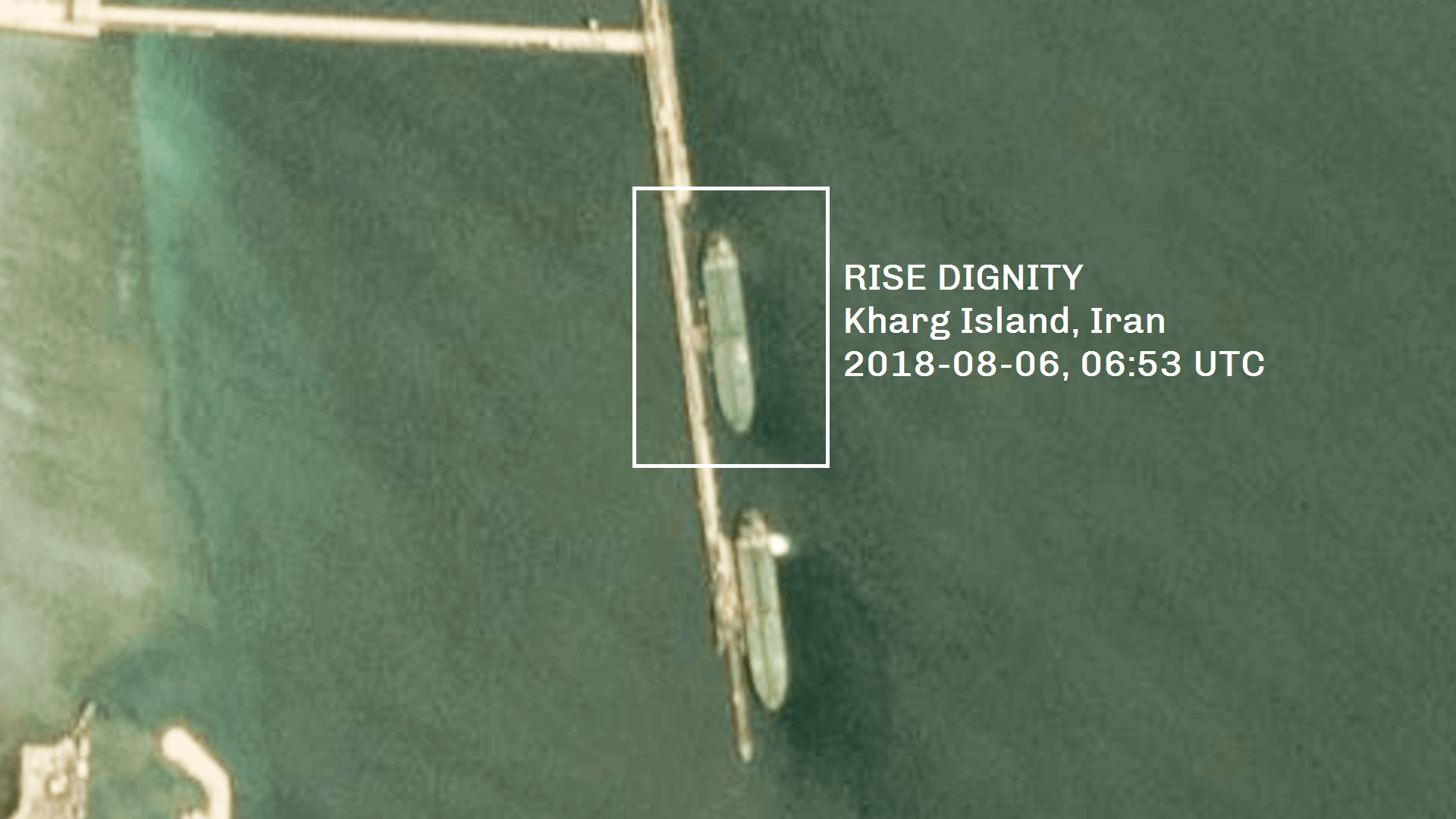 As we mentioned earlier, the RISE DIGNITY shuttles oil regularly to Syria, but now that US sanctions are in the second phase (wind-down period), we have begun noticing this new behavior, and it is not the first time either. Back in July we saw another tanker do the same en route to Syria; called the RISE GLORY.

A couple of days ago, the RISE DIGNITY sailed through the Suez Canal and entered the Mediterranean Sea. Our expectations were true, and her bearings were set towards Syria. After that, she went dark by switching off her AIS transponder. The AIS transponder must be switched on within the Suez Canal just as off the coast of UAE, which means it’s virtually impossible for tankers to cloak their entire trips from the Gulf to the Mediterranean via the Hormuz and the Suez.

Below is a map of RISE DIGNITY’s trace between August 1st and today, August 24th. Please ignore the two horizontal lines in the Arabian Sea as those are brief satellite GPS synchronization anomalies; common for all tankers. 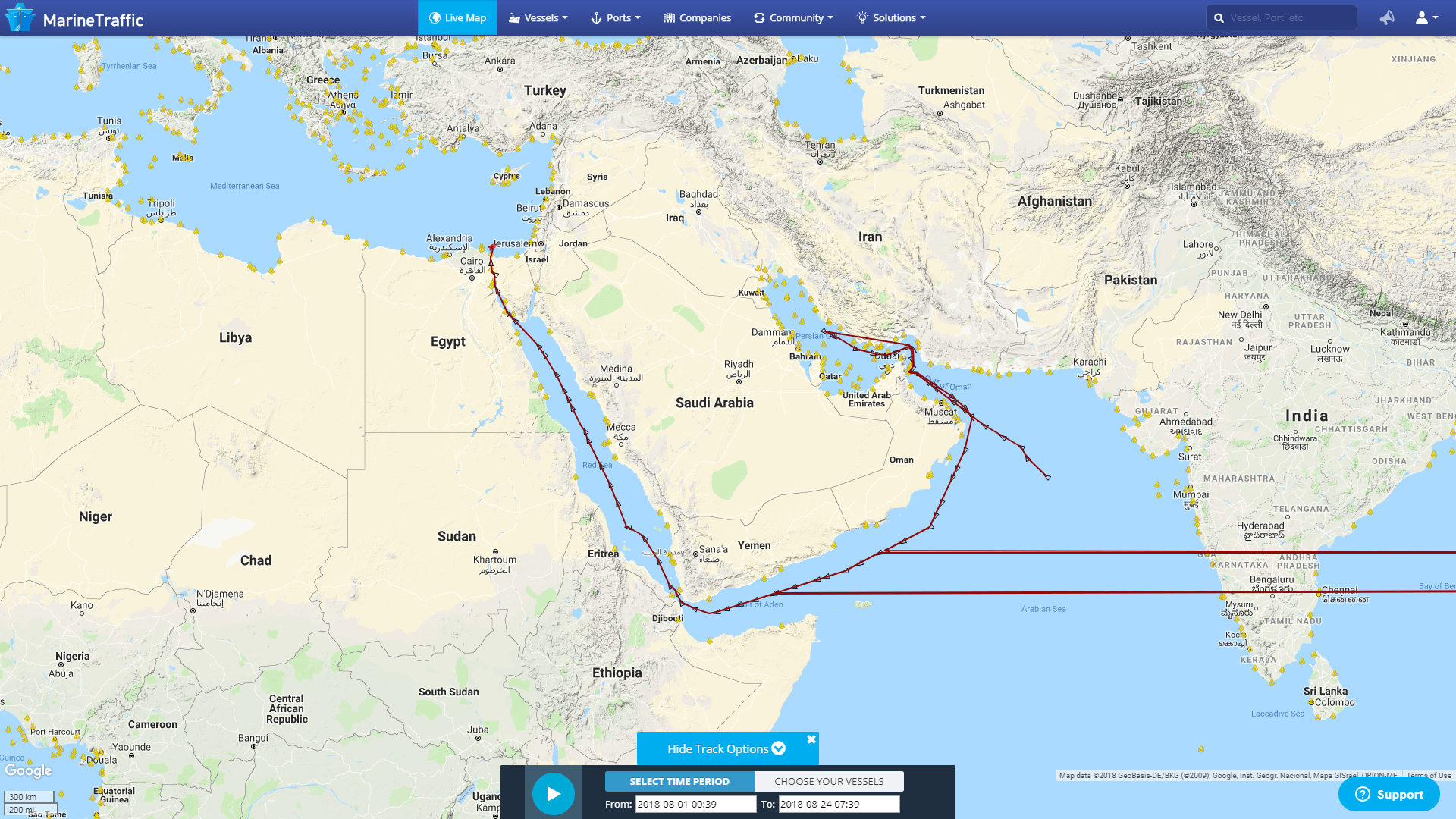 As you can see below, the RISE DIGNITY came out of the Suez Canal on August 21st, set sail towards the northeast in order to get into the right northbound shipping lane and then switched off her transponder at 18:40 UTC. From here, it takes about a day and a half to reach the Baniyas refinery in Syria. 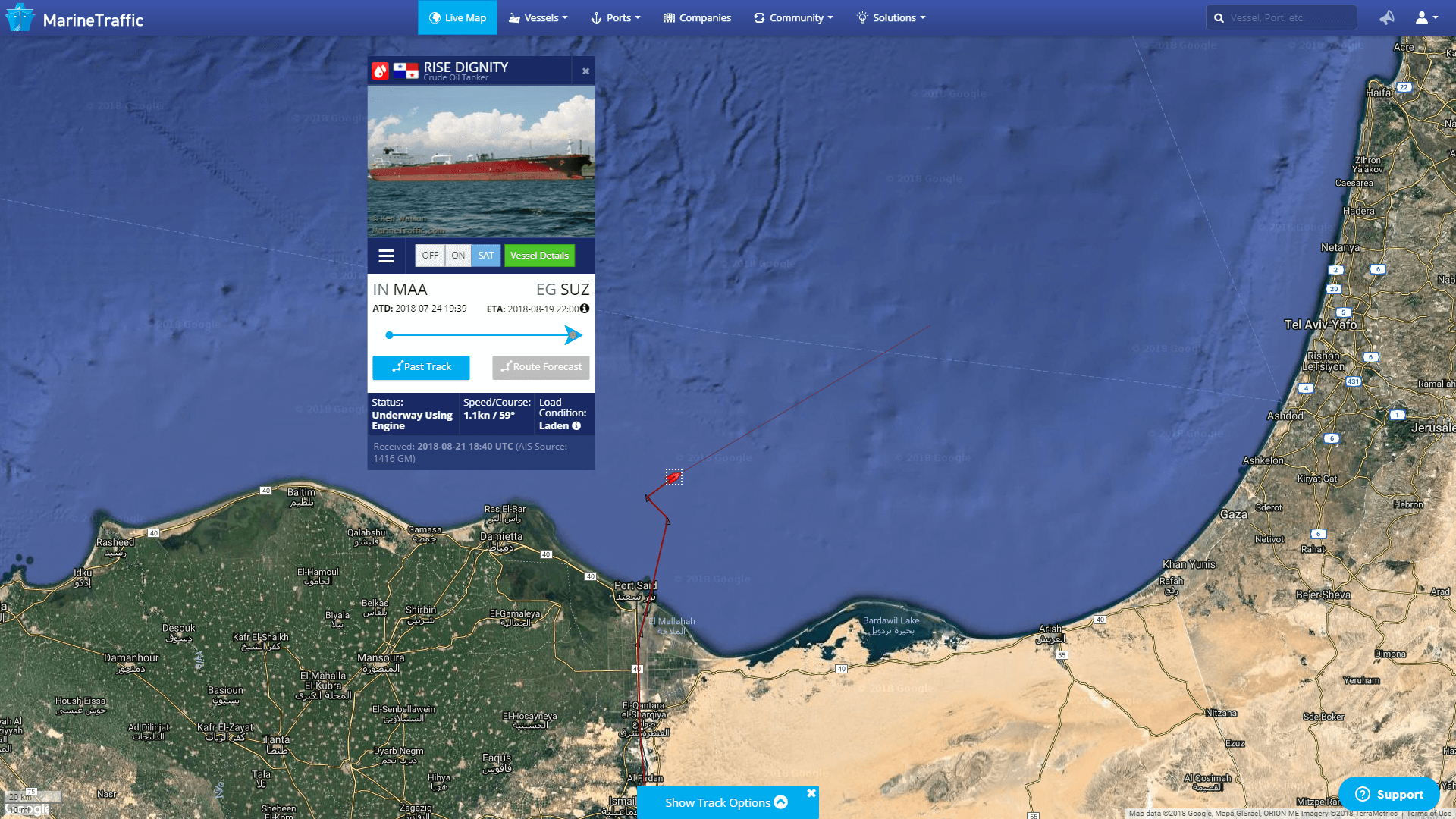 Though a satellite photo wasn’t available on August 23^rd^, a photo did come in today (24^th^). Here she is: 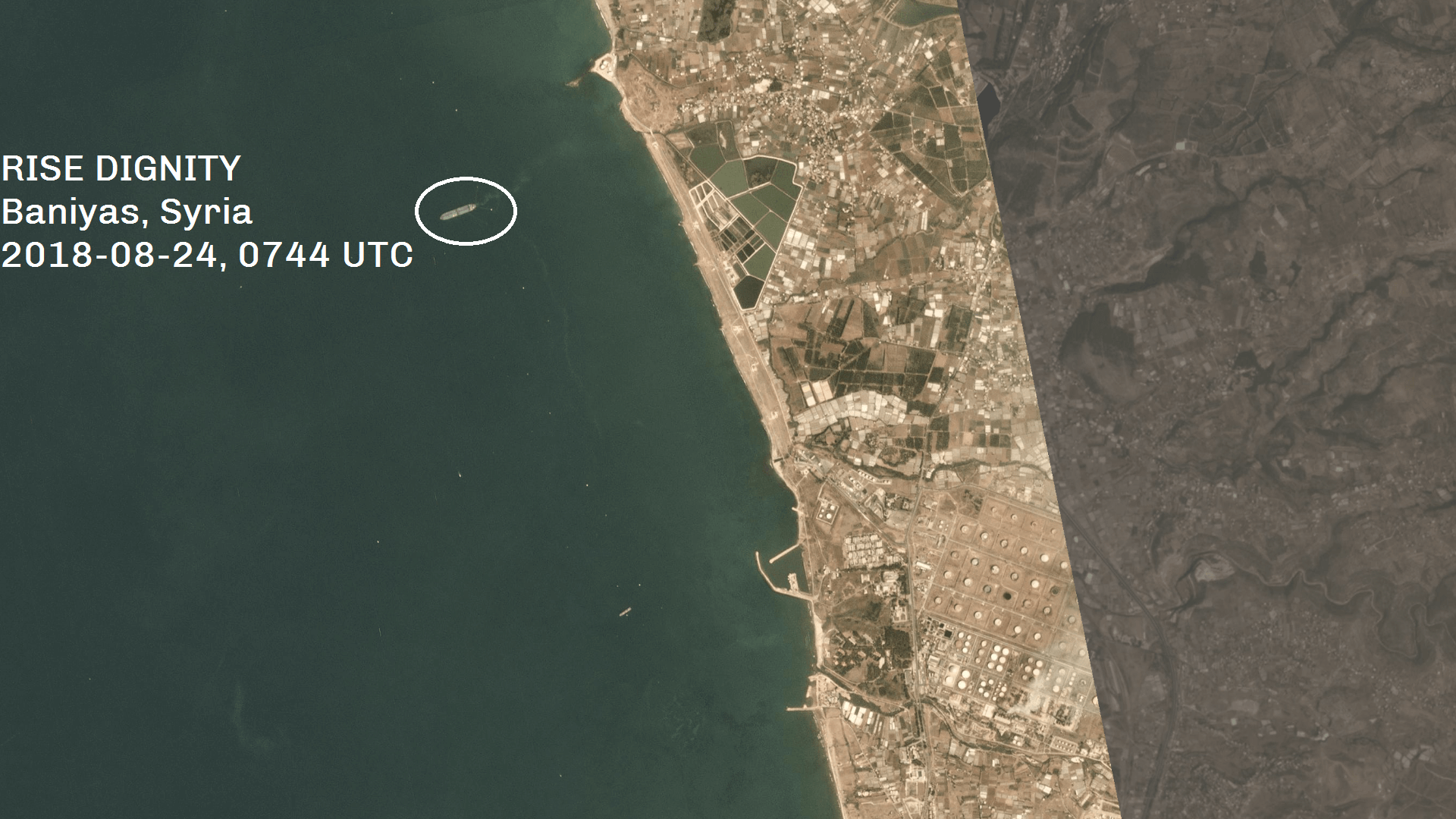 And here’s an enhanced close-up of her. You can actually see her engines are on as there’s smoke over the water. 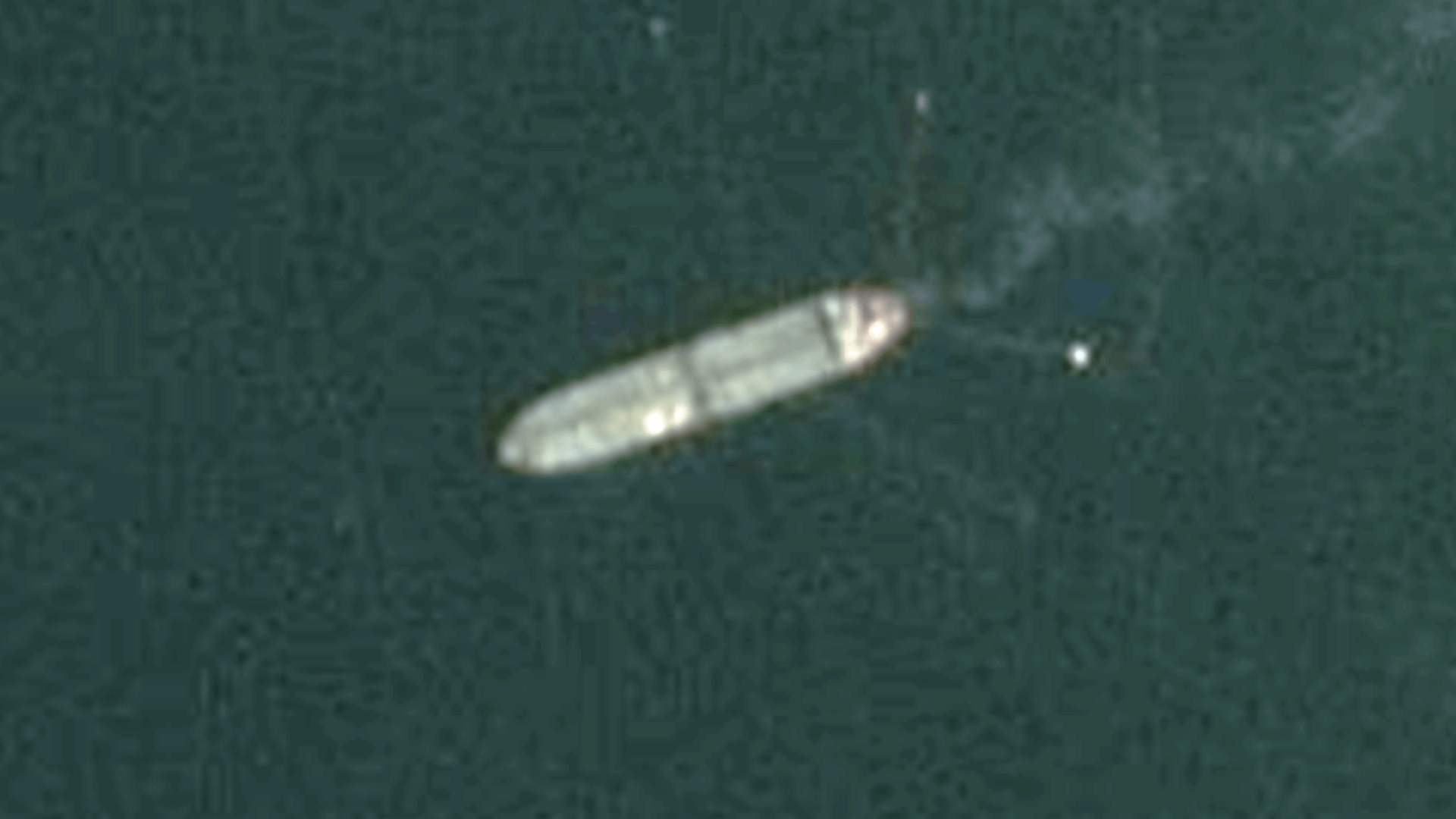 Now you hopefully understand what we see that others don’t. We couldn’t have done it without great partners like Planet Labs and MarineTraffic.