Iran Is Becoming a Tricky Track

There are now 45 days to go before the US sanctions on Iran go into full effect.

As you know; we have already made a great deal of observations during the past year of deliveries, discovering a number of vessels doing their business in what we can only refer to as a clandestine fashion. The tanker crew will switch off their AIS transponder prior to arriving at their destination; such as in the monthly shuttle deliveries of crude oil and refined products to Baniyas, Syria. Over the past couple of months, however, we have also noted the actual pickups from Iran taking place in the same manner. They switch off their AIS transponder prior to entering Iranian waters and turn it back on up to a full week later - after they have left the country. Just a few days after we published our mid-month exports last week; we found another three vessels in a single day which had all left the country with their AIS transponder offline. That’s three vessels carrying a total of more than 4.3 million barrels, with a market value north of $330 million. They switched it back on once they had vacated the area entirely and were way out in the Gulf of Oman, bound for China or India.

In the example below, we look at three tankers which left Kharg Island with crude oil, with a couple of distinctions: One of them went offline prior to reaching Kharg Island and went back online once it was outbound again. This vessel’s name is RISE GLORY, and is a Suezmax. This time, it was carrying 1,081,842 barrels to Baniyas, Syria. We should also explain that Syria is allowed to import crude oil, and Iran is allowed to supply them; yet they keep these transfers off the books. This despite Tehran having publicly provided the Assad regime a petroleum credit line. The other two vessels show a different behavior by remaining online all the way up until the loading berths. One of the tankers is the the VLCC called DOVER, bound for Jamnagar, India with 2,183,609 barrels. The other is a Suezmax called SILVIA I, bound for Aliaga, Turkey with 1,090,767 barrels aboard. As soon as they had moored at the berth, they went offline and did not switch on their AIS transponders until they were in the Gulf of Oman; hence the two straight diagonal lines across the map. 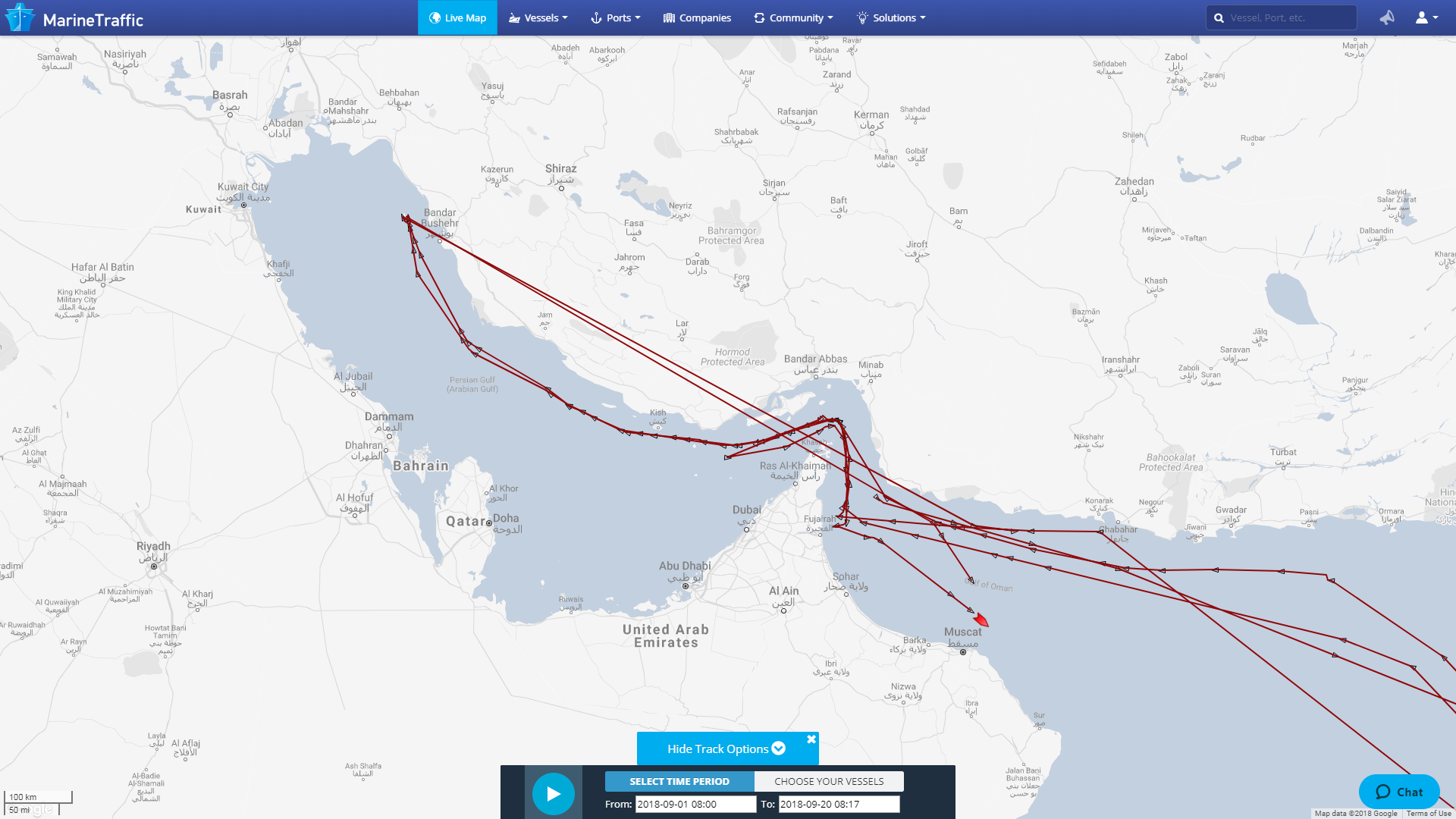 Today, we had a look at the latest satellite images of Kharg Island. They were captured yesterday morning by Planet Labs. The first thing that drew to our attention was the STS (Ship-to-Ship) transfer of crude oil to the east of the island. When we compared the image with the AIS map on the MarineTraffic website, we saw that both vessels had switched off their AIS transponder a few days earlier. The HALTI (the vessel on the left) is fully laden with 2,118,613 barrels aboard and went offline on September 17^th^ while the DORE (the vessel on the right) had approximately 825,223 barrels aboard when the two tethered together. The DORE went offline the day prior.

These are the kinds of things we have to keep closer watch of if we are going to maintain a high degree of accuracy when tracking the Iranian crude oil exports.