It’s a very rare sighting, but we managed to spot an empty crude oil tanker off the shores of southern Yemen. The last time we posted such a story, it involved a shipment of 1.77 million barrels from a dormant port called Ash Shihr. This time, the  port is called the Bir Ali Export Terminal, also known as Rudum, located in a region called Shabwa.

We can see 5 crude oil storage tanks (floating rooftops) at Rudum’s storage tank farm. Our measurements show that each of these 5 tanks can capacitate 150,000 barrels of crude oil, totaling 750,000 barrels. Rudum seems to be very bare and isolated. There’s no major infrastructure one would typically see in a port, but there is however an SBM (Single Buoy Mooring) floating just 3.8km off the coast where this tanker,AMBELOS, is tethered by hose as shown in today’s satellite photo captured by Planet Labs. The pipeline that feeds it is called the Shabwah-Bir Ali pipeline, handling up to 135,000 barrels per day from the Ayad-Shabwa block 209km northeast of Rudum.

AMBELOS arrived in Rudum on July 22nd, 2018 from Rayong, Thailand.

The 250 meter long crude oil tanker was photographed today by Planet Labs at the SBM, just 3.8km away from the 750,000 barrel tank farm.

We made a last-minute Google search to see what we can find in the news, and apparently this article“{target=“_blank“} was posted just six hours ago saying that an oil tanker is expected to transport half a million barrels of crude oil to the Aden refineries now that oil production has resumed;in the Al-Oqla region. Article ends with “The operation comes after a three-and-a-half-year hiatus since Shabwa governor Ahmed Ali Bahaj ordered the suspension of oil operations and dealing with the coupist militia in Sana’a in 2014.”

In conclusion, it seems that Yemen is fairly slowly boosting oil production again.

The AMBELOS is approaching the Strait of Malacca in southeast Asia, and has finally updated her cargo level after picking up oil from Yemen some 11 days ago. She proceeded briefly for the anchorage outside Salalah, Oman and stayed there for 3 hours - most likely swapping crew or loading up on bunkering fuel. We now count 411,275 barrels aboard, meaning she is roughly half full. It took a long time for them to update her levels, and that is highly irregular. She is proceeding to Singapore, and due to arrive on August 10th. We’ll see where exactly she delivers in case Singapore is just a transit point. 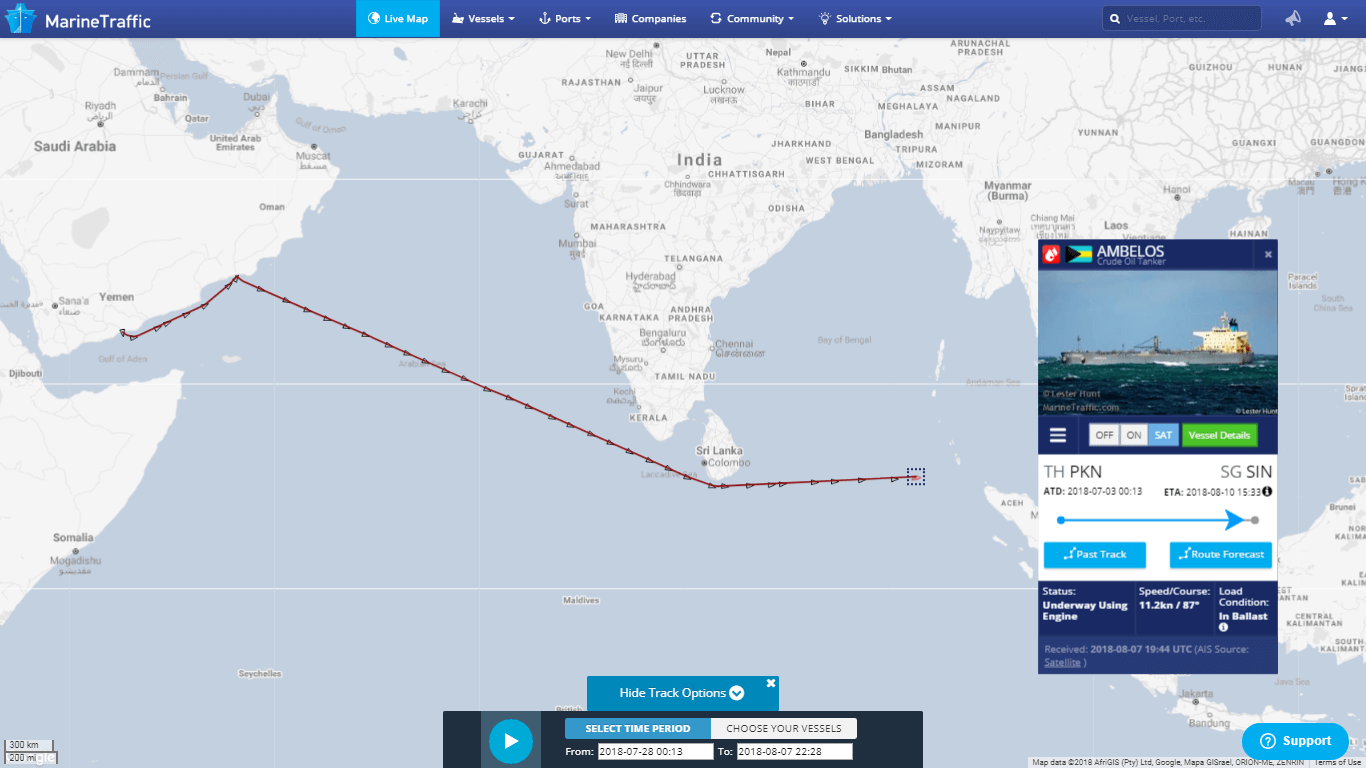